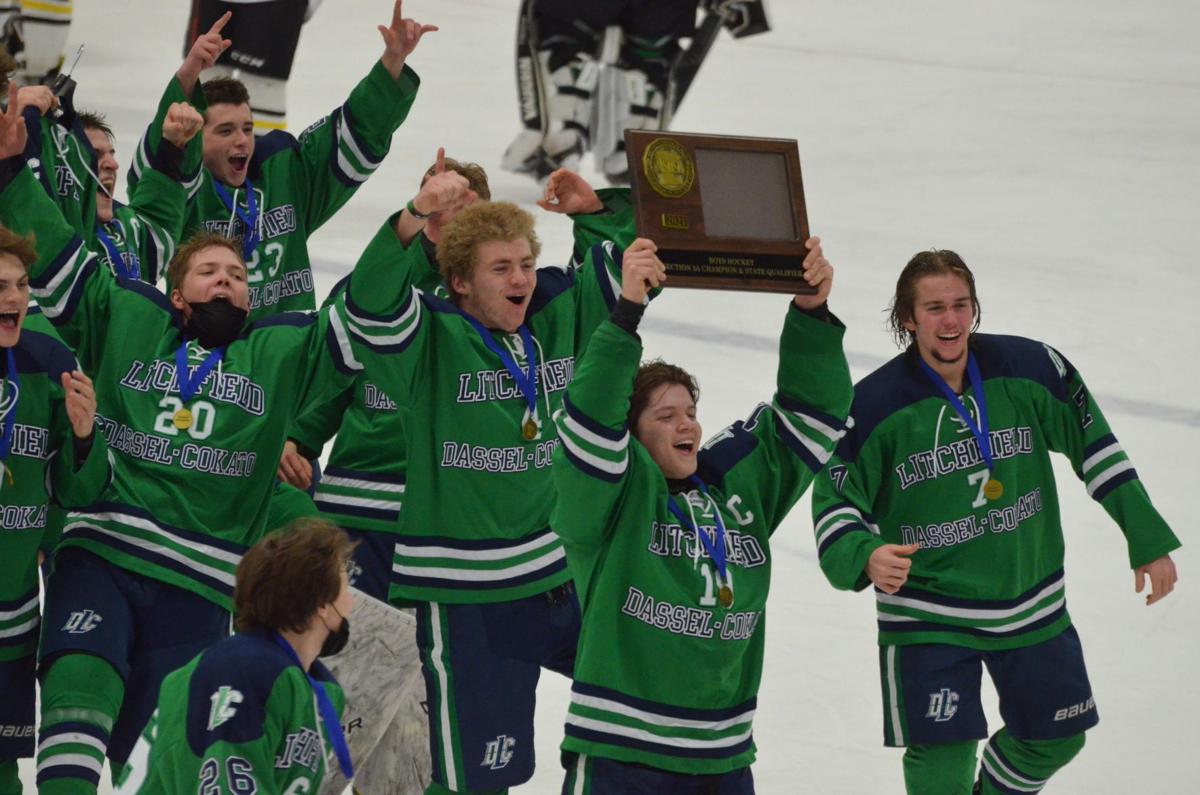 Senior Logan Benson holds up the Section 3A championship trophy as he and his teammates celebrate on the ice in front of Litchfield/Dassel-Cokato fans Wednesday. 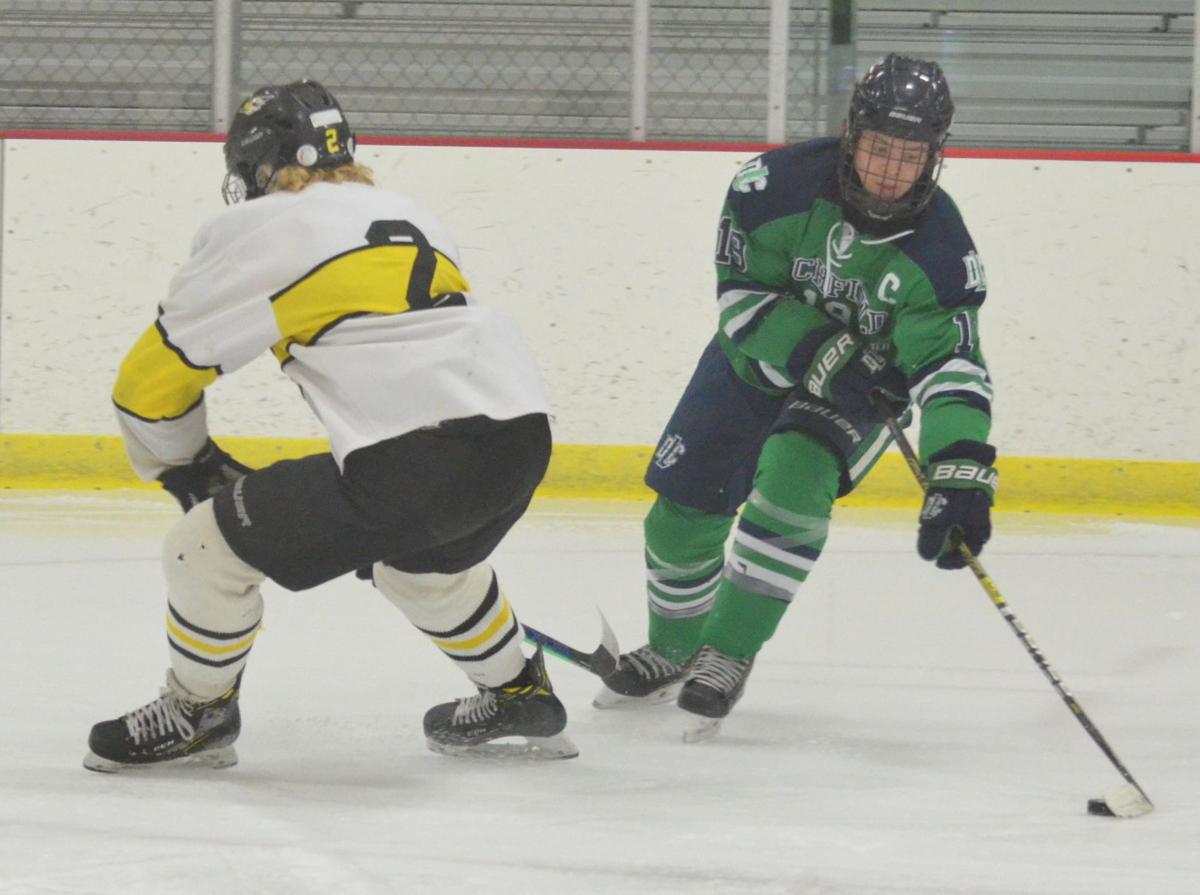 Logan Benson crosses up a Hutchinson defender to line up a shot for his first goal of the night Wednesday. Benson went on to score three goals, plus the game-winner, to help the Dragons win their fifth section title. 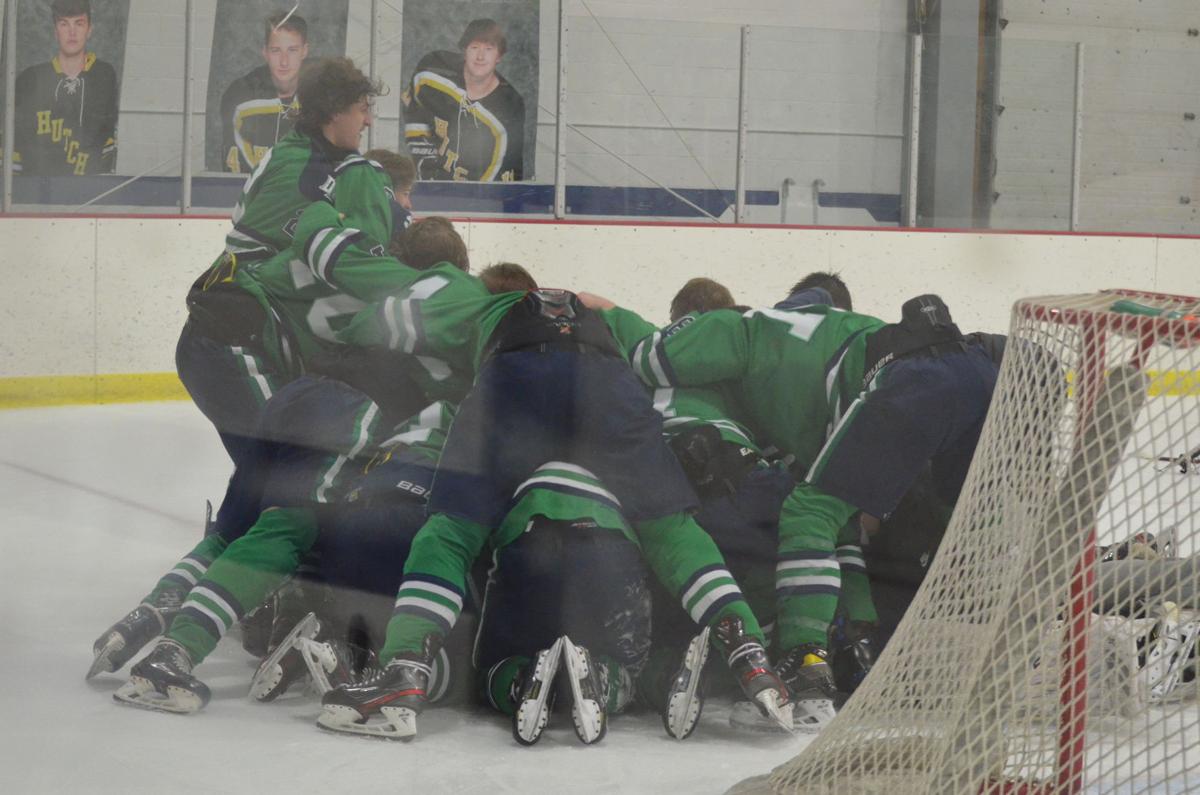 The Dragons boys hockey team piled on each other at Burich Arena in Hutchinson after beating the Tigers 4-3 in the Section 3A championship. 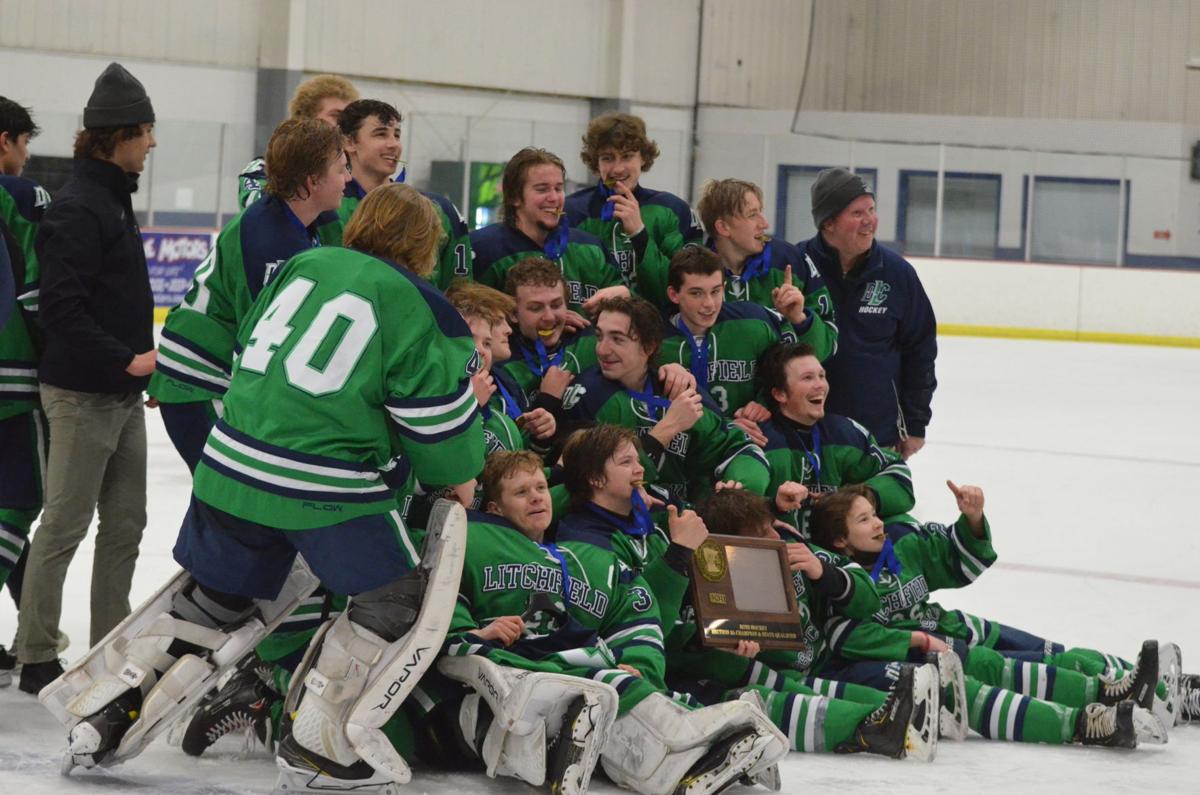 Senior Logan Benson holds up the Section 3A championship trophy as he and his teammates celebrate on the ice in front of Litchfield/Dassel-Cokato fans Wednesday.

Logan Benson crosses up a Hutchinson defender to line up a shot for his first goal of the night Wednesday. Benson went on to score three goals, plus the game-winner, to help the Dragons win their fifth section title.

The Dragons boys hockey team piled on each other at Burich Arena in Hutchinson after beating the Tigers 4-3 in the Section 3A championship.

It was sweet revenge for the Litchfield/Dassel-Cokato boys hockey team Wednesday night. The Dragons knocked out Hutchinson 4-3 in the Section 3A championship one year after the Tigers did the same to them in the 2020 section final.

The fact that it was head coach Brice Berggren’s first win over Hutchinson, and it was on Hutch’s home ice, made the Dragons’ victory against their rival all the sweeter.

Close wins are always a team effort, but there’s often a hero or two who steps at a big time, and for the Dragons Wednesday it was senior Logan Benson, who recorded a hat trick and the go-ahead goal in the third period.

“It feels good,” Benson said about the win. “Two of those goals, the puck just popped out to me and then happened to go in the net after I shot it. So we played good as a team, got the pucks deep and moved our feet well.”

“I guess he woke up this morning and decided, hey boys, jump on my back, we’re going to take this one to the X,” Berggren said.

Benson put the Dragons on the board early with a quick goal in the first three minutes of the game, crossing up a Hutchinson defender and slipping the puck past the goalie for a 1-0 lead. But like most chapters in the LDC vs. Hutch rivalry, the winning team had to battle a full 51 minutes.

“We expected this one to be close from the get-go, and it delivered,” LDC senior goalie Darby Halonen said. “It was very close the entire time. Hutch played extremely well, and I think our boys played extremely well as well, scoring goals and keeping pucks out of the net.”

The Dragons’ second goal of the night was from Gavyn Lund early in the second period, but Hutchinson’s KK Starrett answered a minute later to keep it a one-goal game. As the final minute of the second period started to tick away, Benson netted his second score of the night, giving LDC a 3-1 lead going into the final intermission.

As always, Hutchinson wasn’t ready to throw the towel in yet.

Feeling the pressure with their season on the line, the Tigers jumped out to a fast start in the third period with a goal from T.J. Tydlacka. Then with seven minutes to play, Hutchinson’s Ty Glaser tied the game up and put the Dragons back on defense.

“I’ll be honest, I felt bad for letting those two goals in,” Halonen said, “and I was like, man, whoever scores, I’m taking them out to dinner, because they deserve it.”

Halonen didn’t have to wait long to find out who his dinner date would be. Shortly after Hutch’s third goal, the Dragons found themselves on a power play and Benson only needed 15 seconds to net his third goal, and the game-winner.

“We’ve had tough games with them all year, so it was nothing different,” Benson said about the third-period tie.

“I’m very proud of the way we came back,” Berggren said. “When you have a two-goal lead and all of a sudden it’s tied up, it’s easy to feel that momentum swing and feel it start to go the other way. These boys came back, they answered back, and they came back with a lot of energy.”

With a 4-3 lead, the Dragons finished off the win, including one last nail-bitting penalty kill in the final two minutes of the game. With its ticket to the Class A state tournament officially punched, it’s the team’s first section title since 2018 and its fifth in school history. The Dragons also won section titles in 2014, 2008 and 1996.

“It’s extremely exciting,” said Halonen, who was a member of the 2018 state team. “It’s the first time we’ve been back to state in a couple years now, and most of these guys haven’t been to state.”

LDC fans can circle Wednesday, March 31, on their calendars as the opening day of the Class A state tournament. But th Dragons won’t know who they play, or what time, until later this week.

Litchfield/Dassel-Cokato learned Friday it will play East Grand Forks in the state quarterfinals at 1 p.m. Tuesday at Xcel Energy Center in St. Paul.

East Grand Forks is led by senior forward Landon Park, who has 21 goals and 21 assists on the season, a 2.1 points per game average. His biggest game of the season was a four-goal, one-assist game against Thief River Falls on March 8.

East Grand Forks has outscored its opponents 93-60 in its 21 games.

State semifinal games were slated for 11 a.m. and 1 p.m. Friday at the Xcel Energy Center in St. Paul, with the championship game at 6 p.m. Saturday.

If it wins in the quarterfinals, LDC would meet the Hermantown/Dodge County winner in the early semifinal Friday.