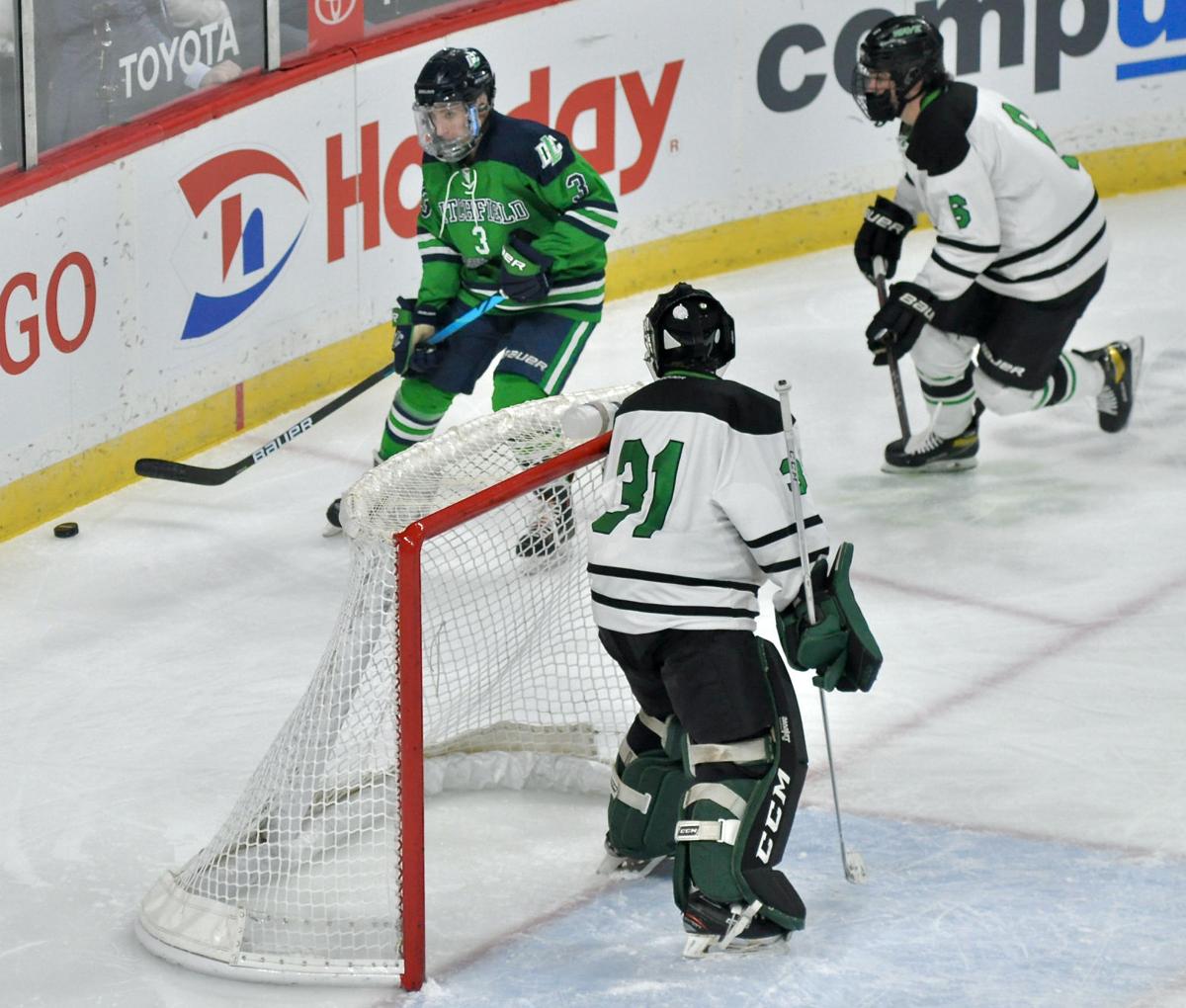 Sophomore Caden Besemer chases down the puck behind the East Grand Forks bench. 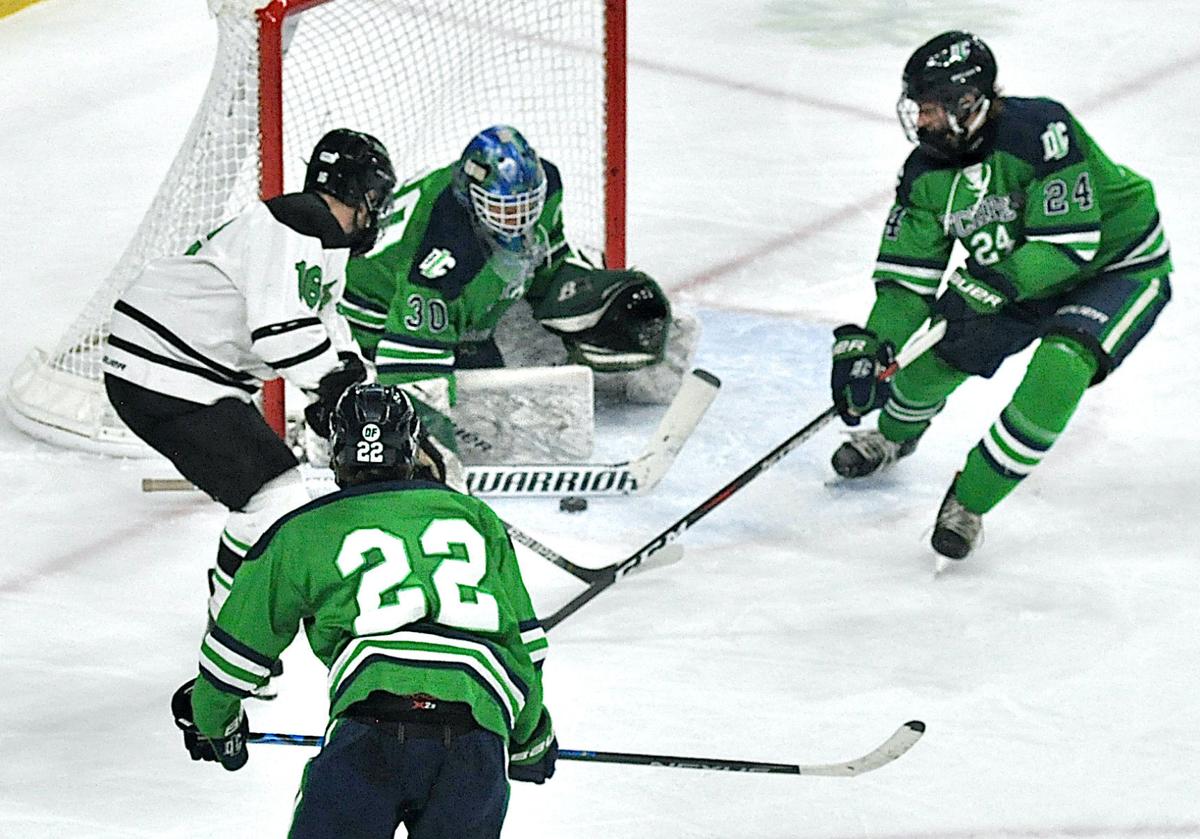 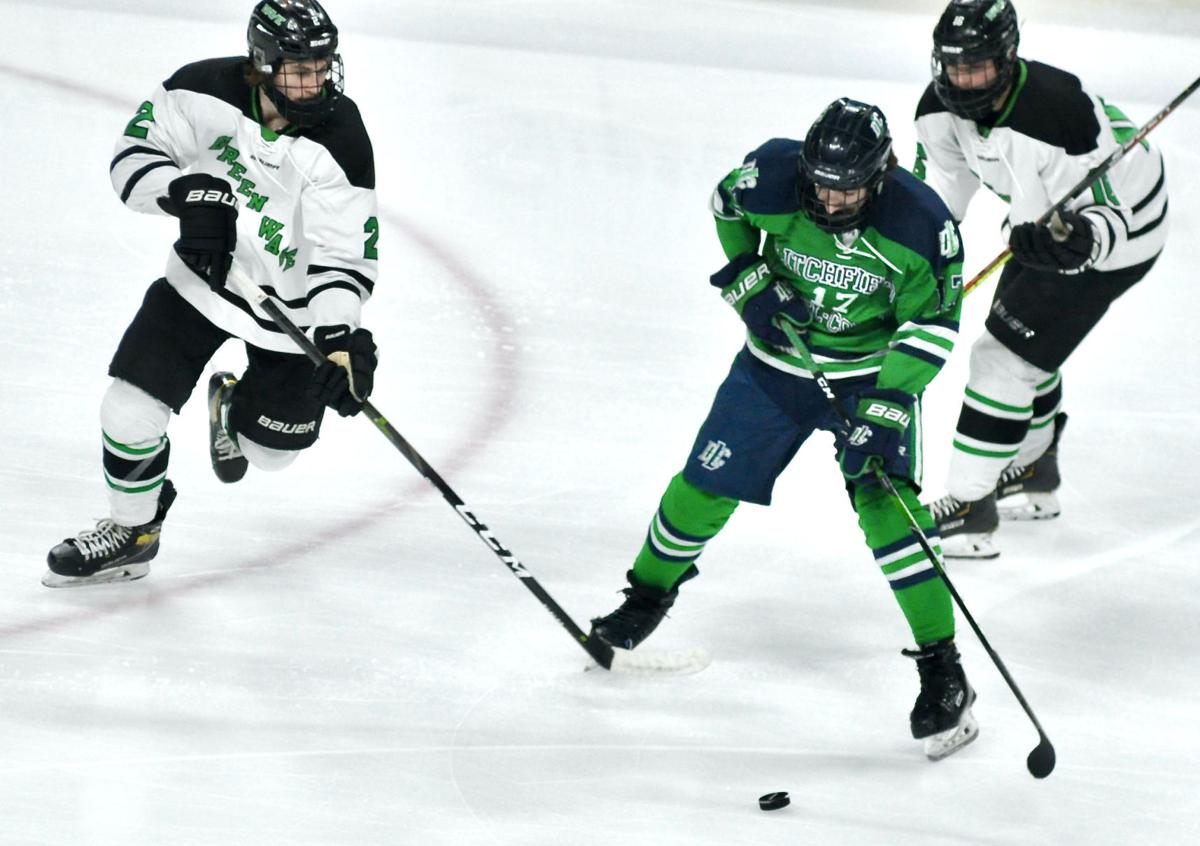 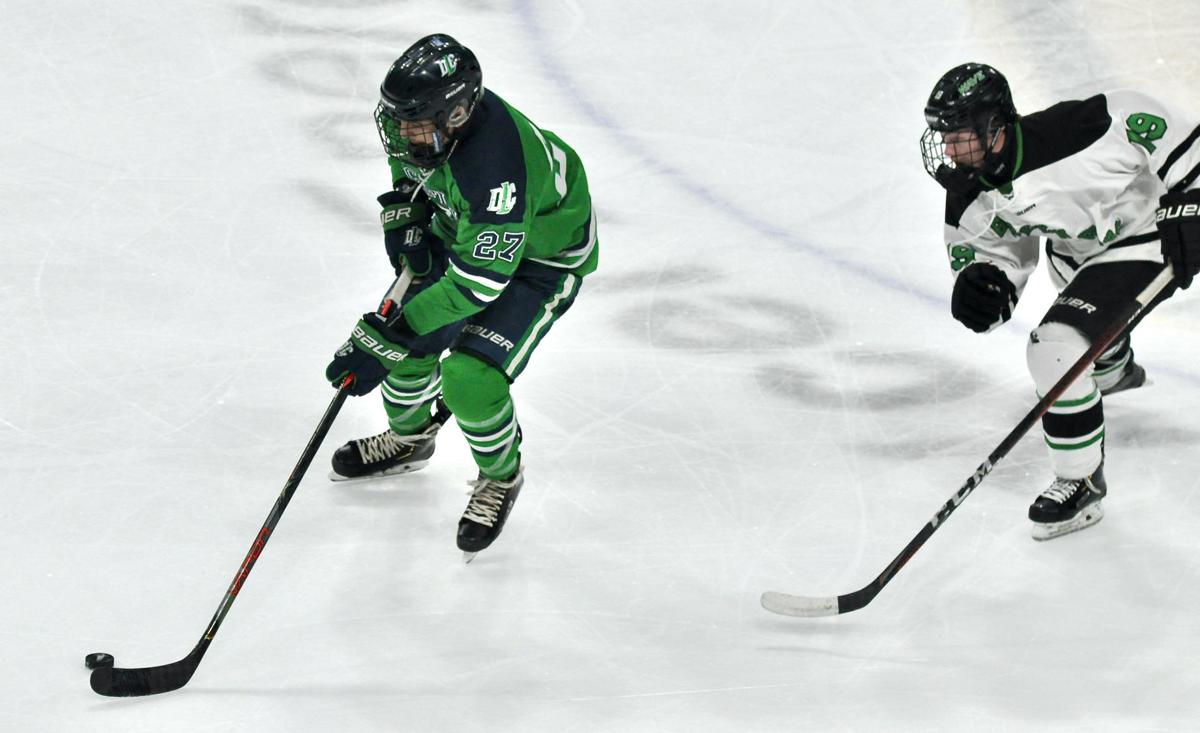 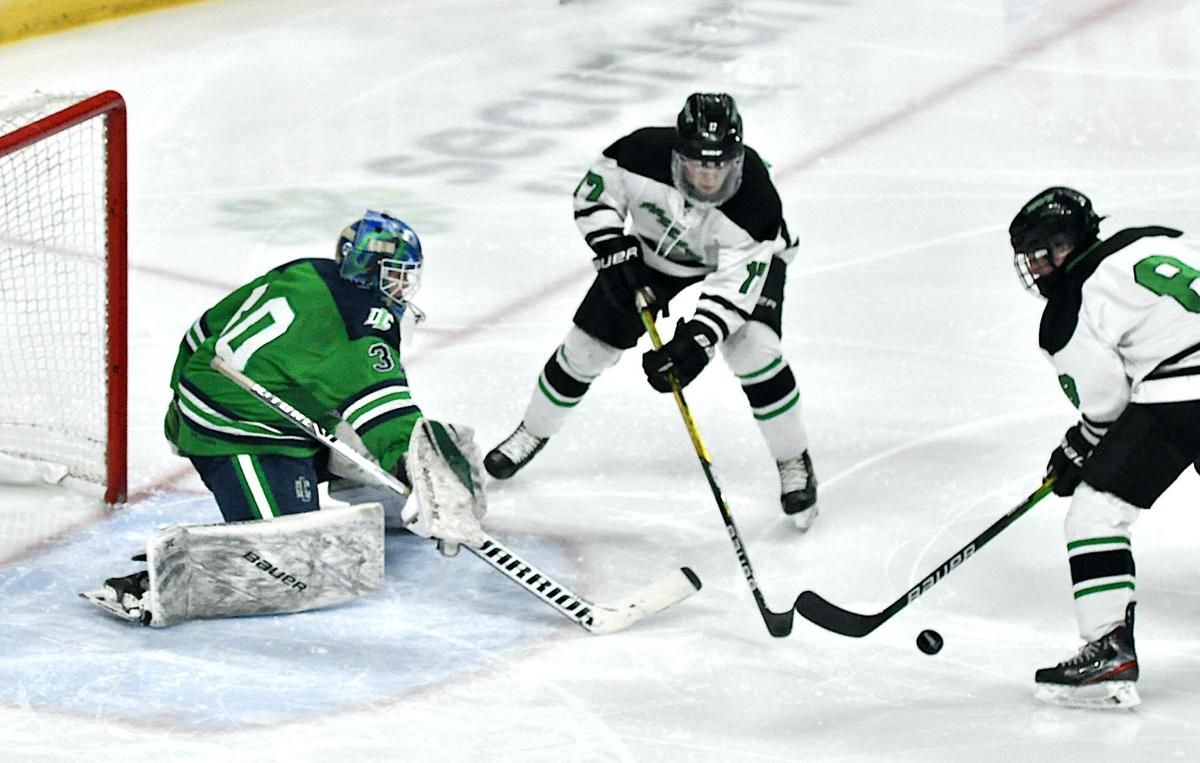 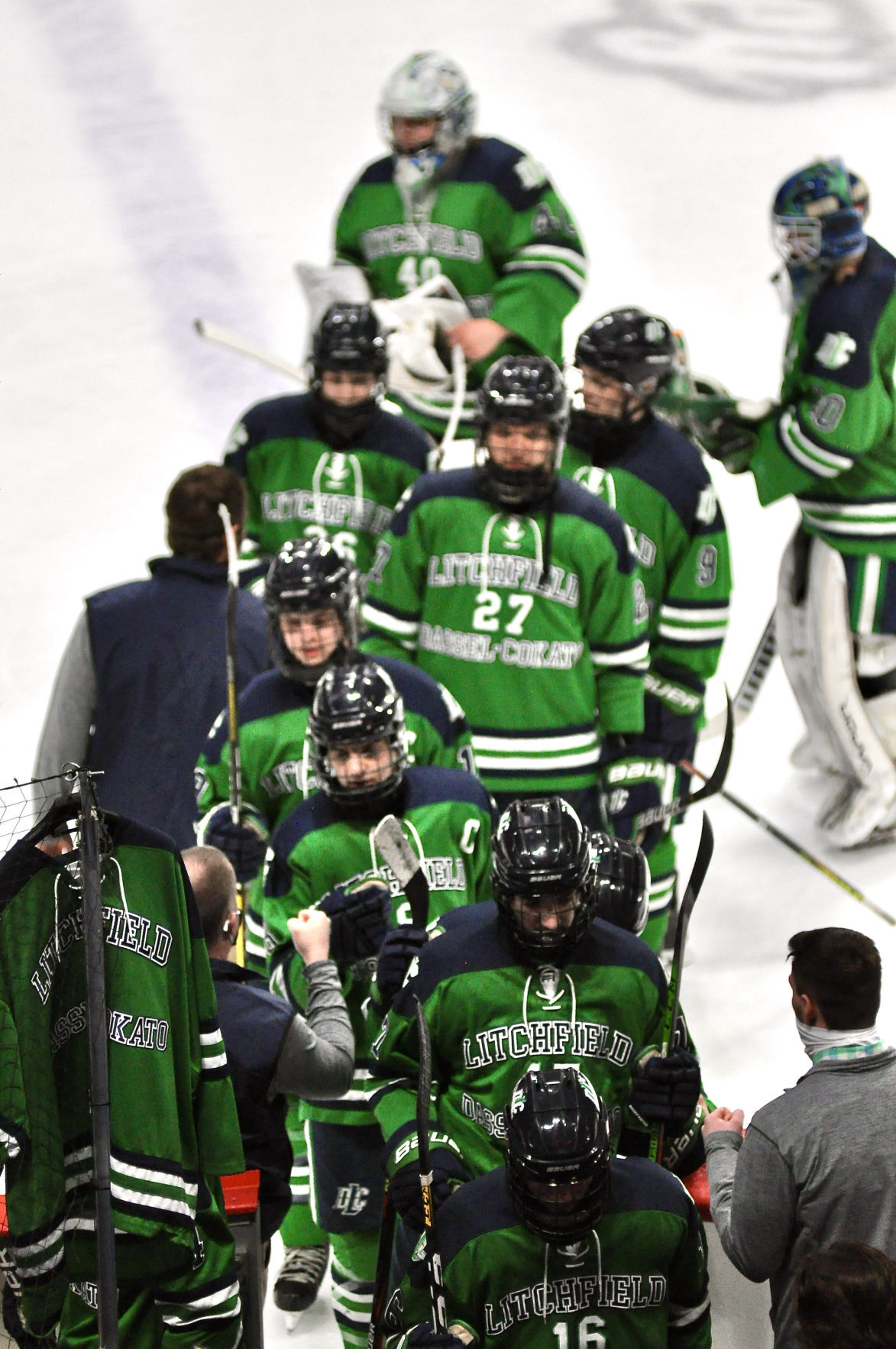 Sophomore Caden Besemer chases down the puck behind the East Grand Forks bench.

For a coach who a day earlier had watched his team fall flat on Minnesota high school hockey’s biggest stage, Brice Berggren was in remarkably good spirits.

“It was awesome,” Berggren said March 31 of Litchfield/Dassel-Cokato’s appearance in the State Class A Hockey Tournament. “It was not the outcome we wanted, obviously, but these boys got a great experience. They got a good learning experience, and our seniors got to end their careers playing on the last week of high school hockey.”

The Dragons lost to East Grand Forks 8-1 in the state quarterfinals March 30 at Xcel Energy Center in St. Paul, a game in which they were thoroughly outplayed. East Grand Forks scored just 25 seconds into the game and wound up dominating the contest, outshooting L/DC 51-9. The game went to running time with more than 11 minutes to play in the third period.

Not the kind of game the Dragons wanted at all. And yet, Berggren said, the overall experience was one players would remember, likely for the rest of their lives.

“That’s something they’ll talk about at a 20-year class reunion, that’s the cool thing,” Berggren said. “It’s that feeling of, you’re one of the last eight teams in the state that’s playing. This is a childhood dream for any kid who grows up playing hockey. Not many people actually get to do that. It’s a huge privilege to make it there.”

That’s what Berggren said he wanted the team — especially the seniors — to remember. The honor and the pride of knowing they made it, no matter what the outcome.

Those seniors deserve much credit for the success the Dragons had this season. Two of the team’s top three scorers — Logan Benson (11 goals, 14 assists) and Mason Schroeder (6 goals, 12 assists) — and No. 1 goal Darby Halonen (.898 save percentage) are seniors.

But even more than what they did statistically on the ice, it was the seniors’ leadership that made a difference, Berggren said. They created a family atmosphere that helped the team push through difficult stretches and to eventually break into the state tournament field by vanquishing Hutchinson — a team they lost to in last year’s section finals and twice during this regular season — in the Section 3AA championship game.

This was just Berggren’s second season as head coach, and he acknowledged a sense of good fortune to inherit the players who made up this year’s team.

“This group of seniors, this is a special group,” he said. “Their leadership, as far as I’m concerned, they’re second to none. They led by example. They were vocal when they needed to be. They created an atmosphere in the lockerroom … I had zero personnel problems this year. These guys are like brothers.”

The tone set by the seniors was demonstrated every Saturday that there wasn’t a game. On those days, they had 7:30 a.m. practices.

“Never a complaint,” Berggren said. “I didn’t have anybody late to practice this season. It was, like, easy. These guys wanted to be there. They wanted to work. They wanted me to push them. Their willingness to do whatever it takes for the team … that was those seniors. We will miss them a lot.”

But Berggren does not plan to sit around lamenting their loss. Rather, he’s already looking to the future.

“It’s never too early,” he said. “Once your season ends, it’s natural to start thinking, ‘what’s next year going to look like?’”

Litchfield/Dassel-Cokato’s 20-man playoff roster included five seniors, which means 15 players will be back next year with playoff and state tournament experience. The junior varsity team also had a successful season, meaning even more talent could be available.

“A good way to look at this (is) last year we made it to the section final game,” Berggren said. “It didn’t go like we had hoped (an 8-1 loss to Hutchinson), but we had a lot of sophomores and juniors, and they got a taste for what the that section final game was like. This year, these juniors and seniors got a taste of what it’s like to win that section championship, to go to the ‘X’. I hope they stay hungry for it.

“Hopefully you could build off what you did this year,” he added. “This should only create excitement in our program, wanting to play, wanting to experience that.”

Junior forwards Jack Hillmann (8 goals, 11 assists) and Ryan Schutz (6 goals, 9 assists), and junior defenseman Gavin Hanson (6 goals, 10 assists) were in the top five in scoring this season. And sophomore defenseman Caden Besemer, who had four goals and an assist this season, scored the Dragons’ only goal against East Grand Forks.

And they have the experience of having played a talented team like East Grand Forks, which boasts three Division I recruits and plays “on another level” from most competition the Dragons faced this year.

“We want to get to that level … where it kind of becomes a tradition,” Berggren said. “East Grand Forks is that northern (Minnesota) style hockey tradition.

“I look at that and (ask) ‘how do we get to that level?’” Berggren added. “It takes time. It takes years. It’s a process. And the more we can play teams like (East Grand Forks), the more that helps the process.”