Litchfield’s Section 2AAA championship team posed for a photo in front of the scoreboard following the Dragons’ 55-14 win over Rockford Friday. 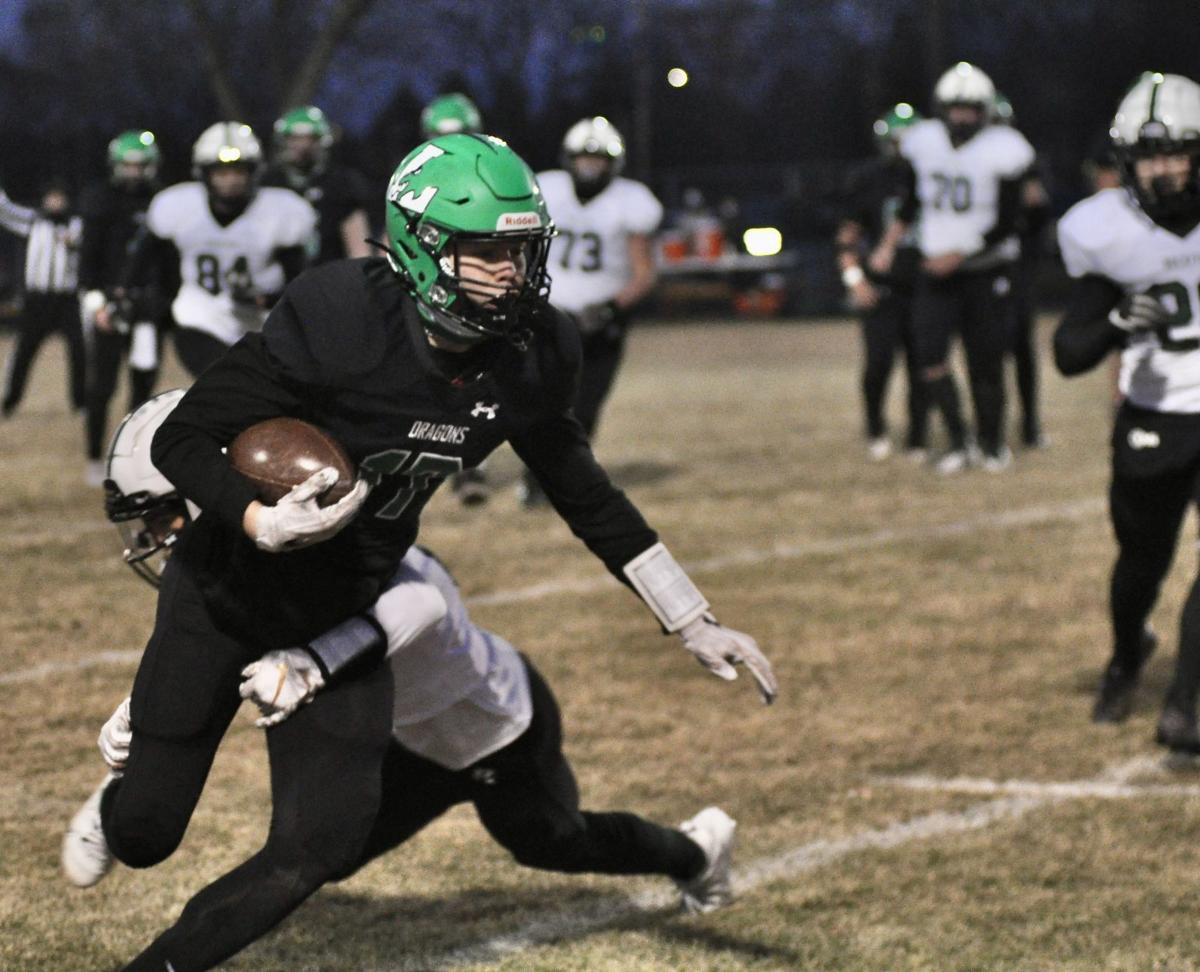 Tyson Michels tries to shake a tackle after a first-half reception. Michels finished the game with nine catches for 137 yards and two touchdowns. 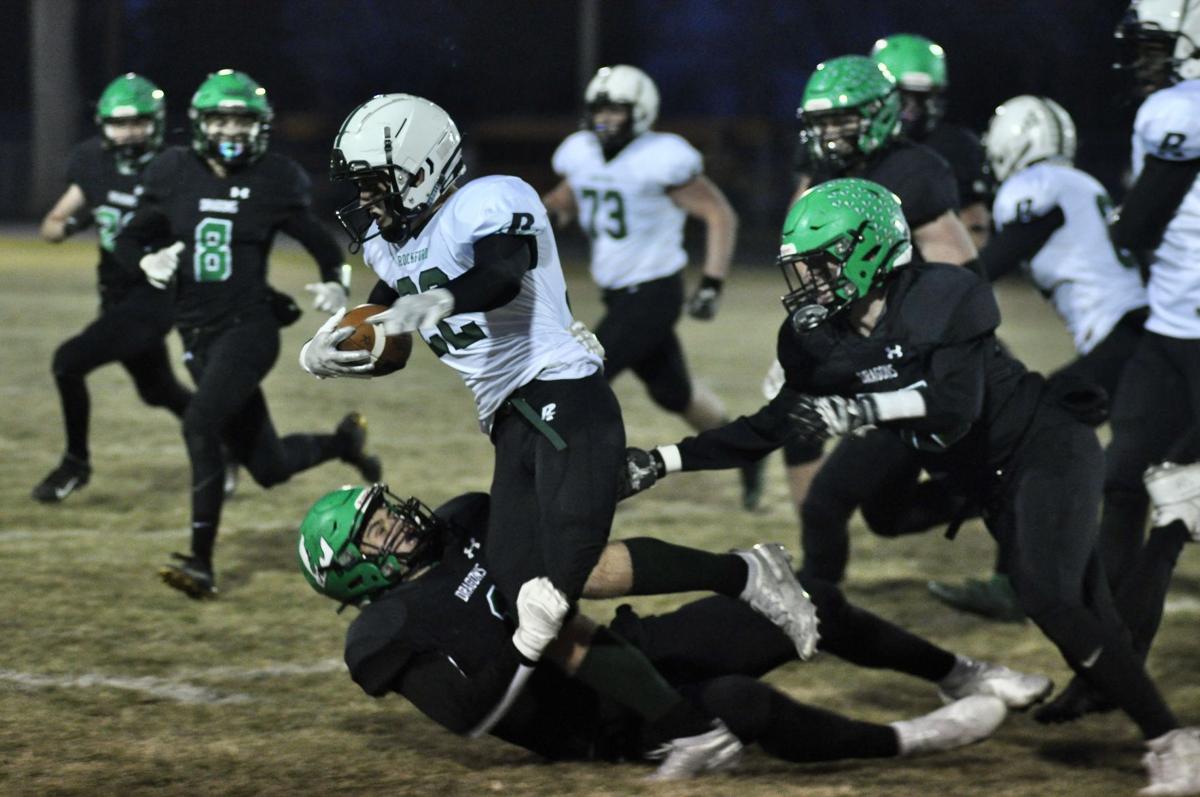 Beau Weseloh goes to the ground as teammate Maison Olson closes in to help on the tackle of Rockford’s Connor Schreckenghaust. 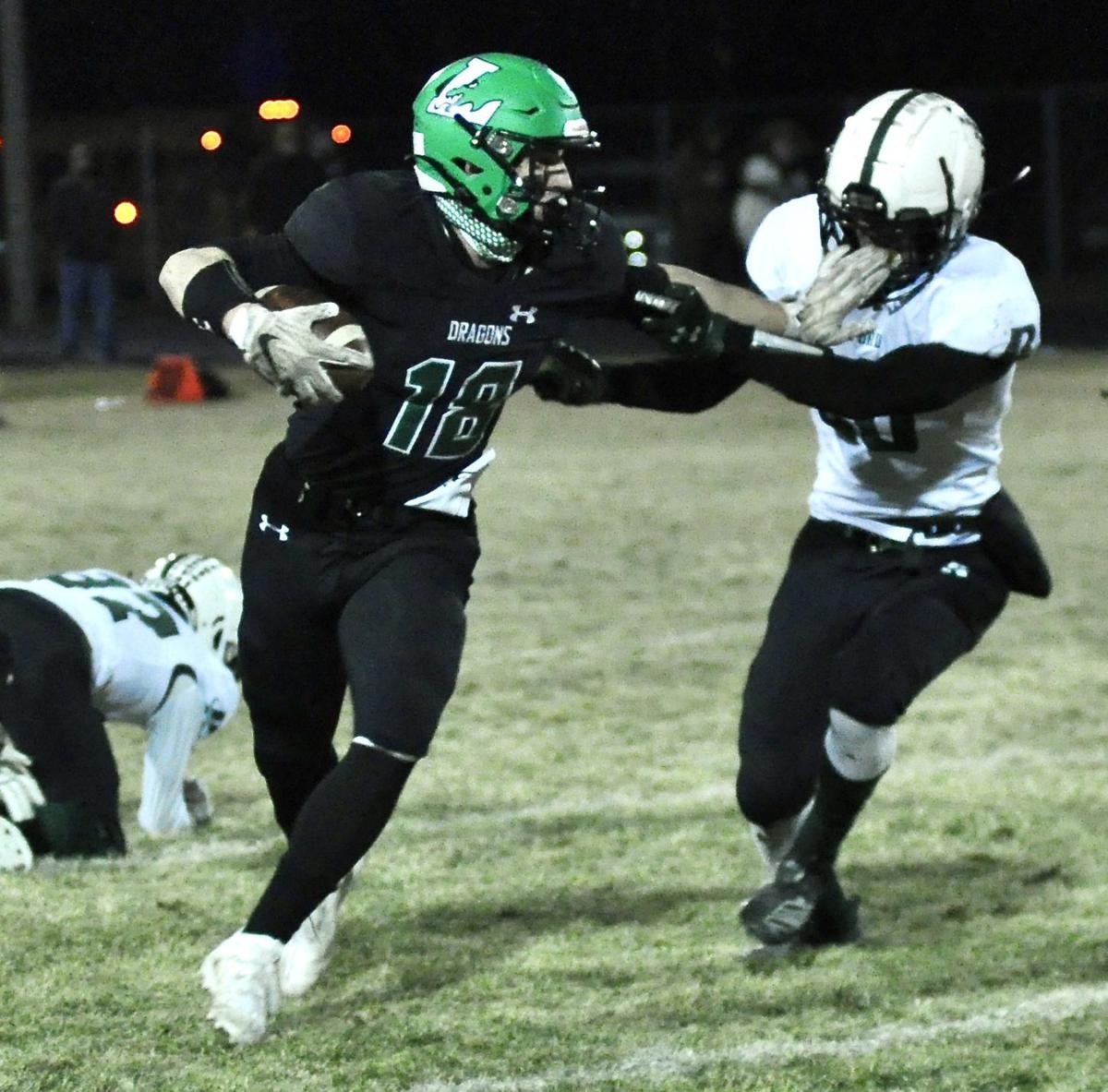 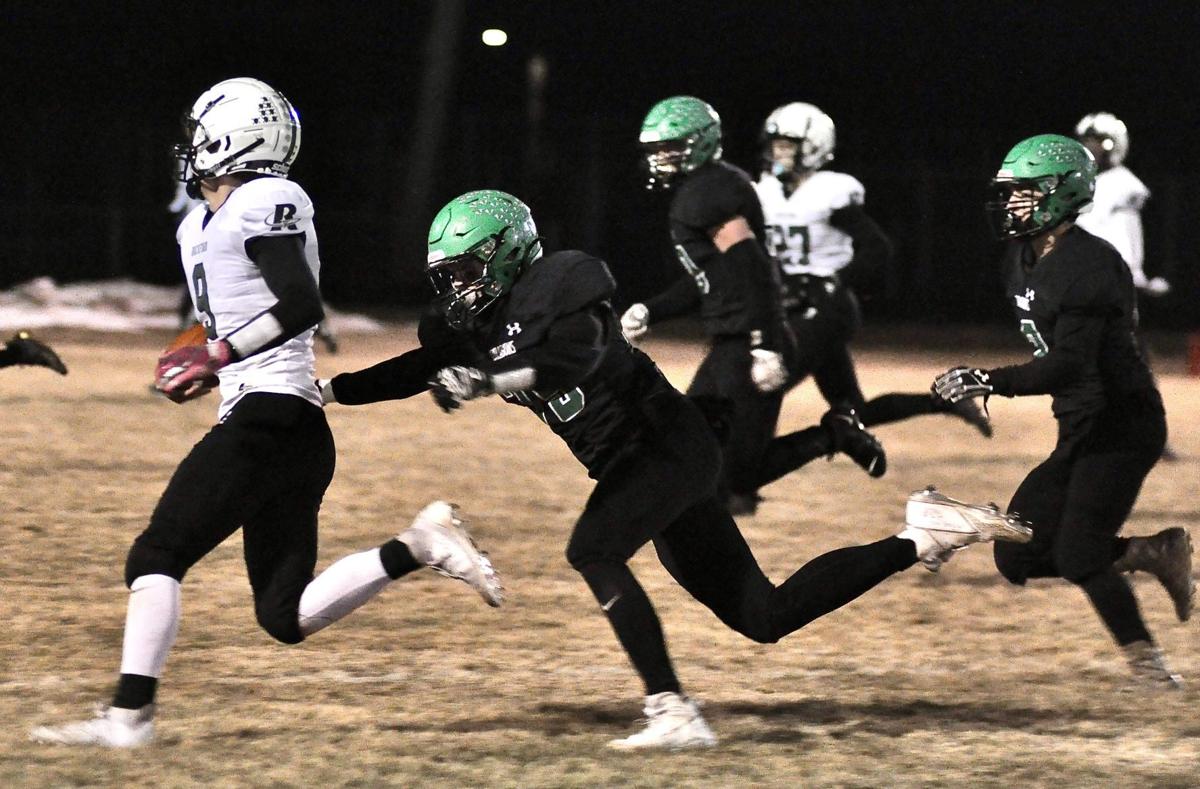 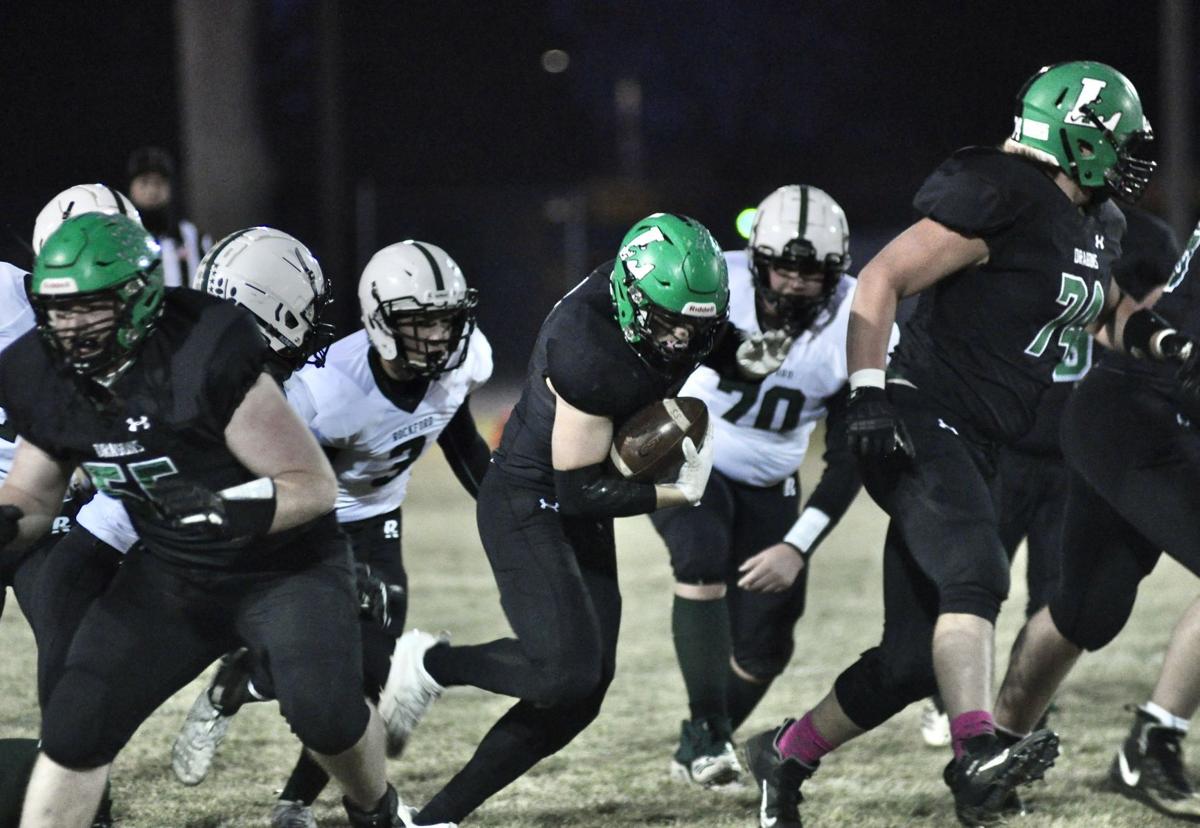 Litchfield’s Section 2AAA championship team posed for a photo in front of the scoreboard following the Dragons’ 55-14 win over Rockford Friday.

Tyson Michels tries to shake a tackle after a first-half reception. Michels finished the game with nine catches for 137 yards and two touchdowns.

Beau Weseloh goes to the ground as teammate Maison Olson closes in to help on the tackle of Rockford’s Connor Schreckenghaust.

Jim Jackman didn’t want to dwell on “what ifs” Friday night as he stood on the Litchfield High School football field following the final game of the season.

The Dragons head coach preferred instead to talk about the “what was.”

There was plenty talk about either way.

But we can start with the what was: Litchfield closed one of its most successful seasons in recent program history with a memory-making performance, thumping Rockford 55-14 in what was — unusual as the trip might have been — the Section 2AAA championship game.

It was the kind of overwhelming performance the Dragons have threatened all season as they piled up nearly 600 yards of total offense — 403 through the air — while holding Rockford to less than 200 yards and forcing four turnovers.

“With all the things going on in our world right now, and the challenges that we’re having, I was just happy to be out here and playing,” Jackman said. “Not knowing what was going to happen this fall, late summer and this fall, and to get out here and give it a shot, we made the best of it.”

The game was played Friday due to Gov. Tim Walz’s executive order, announced Wednesday evening, which called a four-week “pause” to all youth and high school sports seasons effective Saturday.

The championship was Litchfield’s first playoff game. Seeded No. 1, the Dragons, 5-1, were scheduled to play No. 8 Belle Plaine on Nov. 17. But when a COVID-19 outbreak on the team forced Belle Plaine to shut down for the season, Litchfield advanced with a bye.

That meant a return meeting with Dassel-Cokato, a team the Dragons beat 15-13 earlier this season, and to whom they had lost in the section semifinals last season. The Highway 12 rivalry was one highly anticipated by players and coaches. Until, that is, the governor’s announcement.

Section 2AAA officials made a quick decision, announcing only hours after the governor spoke that the section’s top two remaining teams — Litchfield and No. 2 seed Rockford — would meet for the section championship Friday night.

“You know, we were prepping for D-C all week,” Jackman said, “and then things changed. The last couple days was challenging.

“We talked tonight that we needed their best games,” Jackson said of his pregame instructions to the team. “We’ve had some ups and downs a little bit. You know, we’ve obviously won football games, but we haven’t, in my opinion, felt like we’ve played one complete game really, really well.”

It still might not have been the perfect game Friday. But it was pretty good.

Litchfield received the opening kickoff and marched 80 yards in 11 plays, a drive that culminated with a 24-yard pass from Ben Alsleben to Tyson Michels.

That drive, along with the Dragons’ second touchdown — a 10-yard pass from Alsleben to Bennett Lecher — were excellent illustrations of the team’s explosive offensive weapons this season.

Alsleben finished the game with a single-game team record 403 yards and five touchdowns on 25-for-28 passing. The eye-popping passing game helped Alsleben eclipse both his own single-game and season records for passing yardage. He threw for 393 yards in last year’s section semifinal game against Dassel-Cokato and finished the season with 1,926 yards passing. He finished this season with 1,938 yards passing, unofficially.

Meanwhile his two favorite targets — Michels and Lecher — made their own marks on the Litchfield record book.

“You know, we have a number of kids that did some fantastic things,” Jackman said. “I’m not going to go into every kid, but just how they improved their game, whether it was from their junior year to senior year, or sophomore to junior year, the little things that they did to become a better athlete, football player, person. It’s just hats off to those guys.”

Of course, that tip of the hat couldn’t help but leave some wondering, “what if?”

Those offensive records came crashing down in just seven games. What if Litchfield had played a full eight-game regular season, instead of the pandemic-shortened six-game schedule? What if there were more playoff games? What if the Dragons could have reached the state tournament, where they might have played indoors on turf at a venue like U.S. Bank Stadium — a field seemingly built for their speed and aerial antics?

Tempting as it might have been for some, Jackman wasn’t having it. Rather, he enjoyed the moment, watching players gather for team and small group photos, smiling, shouting, celebrating a championship — the “what was” of an unusual yet successful 2020 season.

“You never know, there’s been years where I thought we were going to be the team to beat, and then whether it’s injuries happen or somebody just ups and beats us,” Jackman said. “So, no, I don’t look at it that way. I’m just thankful for the games we did get to play.”

It might have been short, but Litchfield's football season was one to remember. A look back at results from the 2020 season: