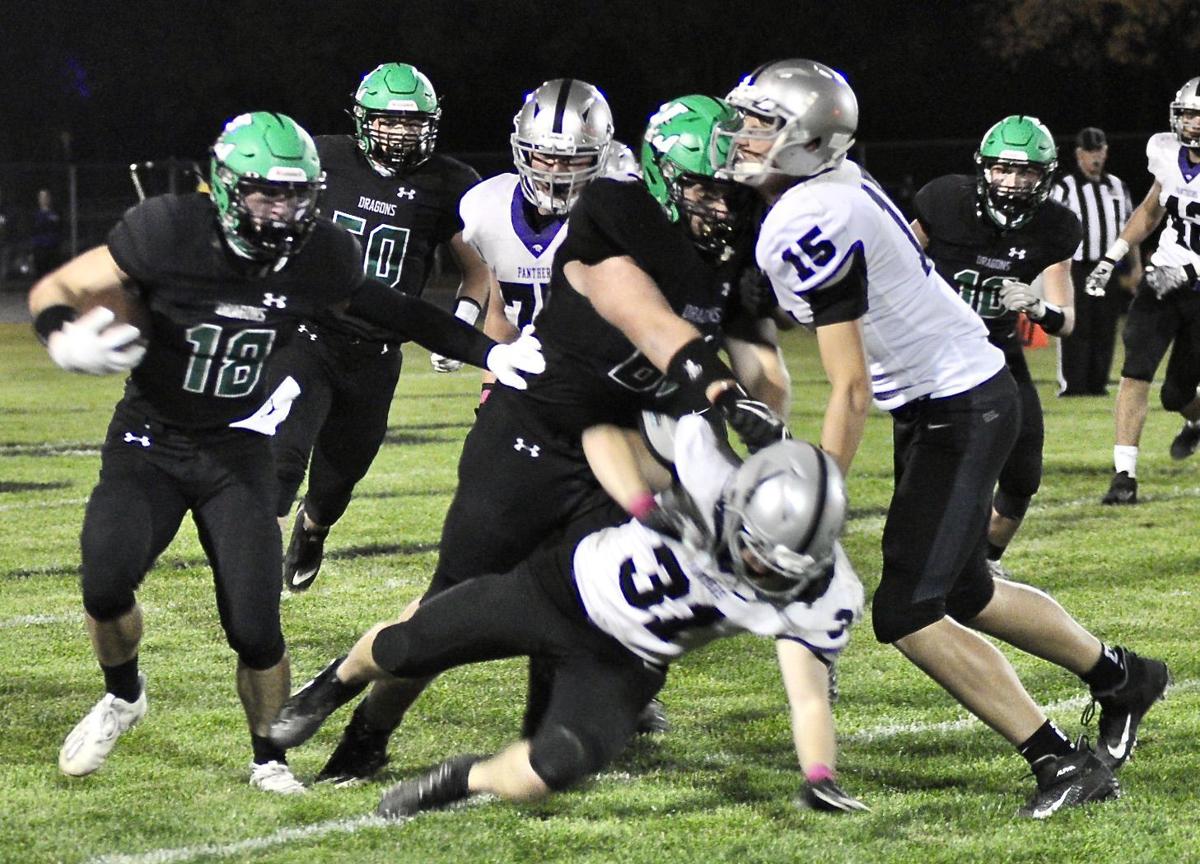 Litchfield senior Bennett Lecher carries on an end around, which he turned into a 39-yard touchdown run to cap the Dragons' scoring in a 34-14 win over Glencoe-Silver Lake Friday. 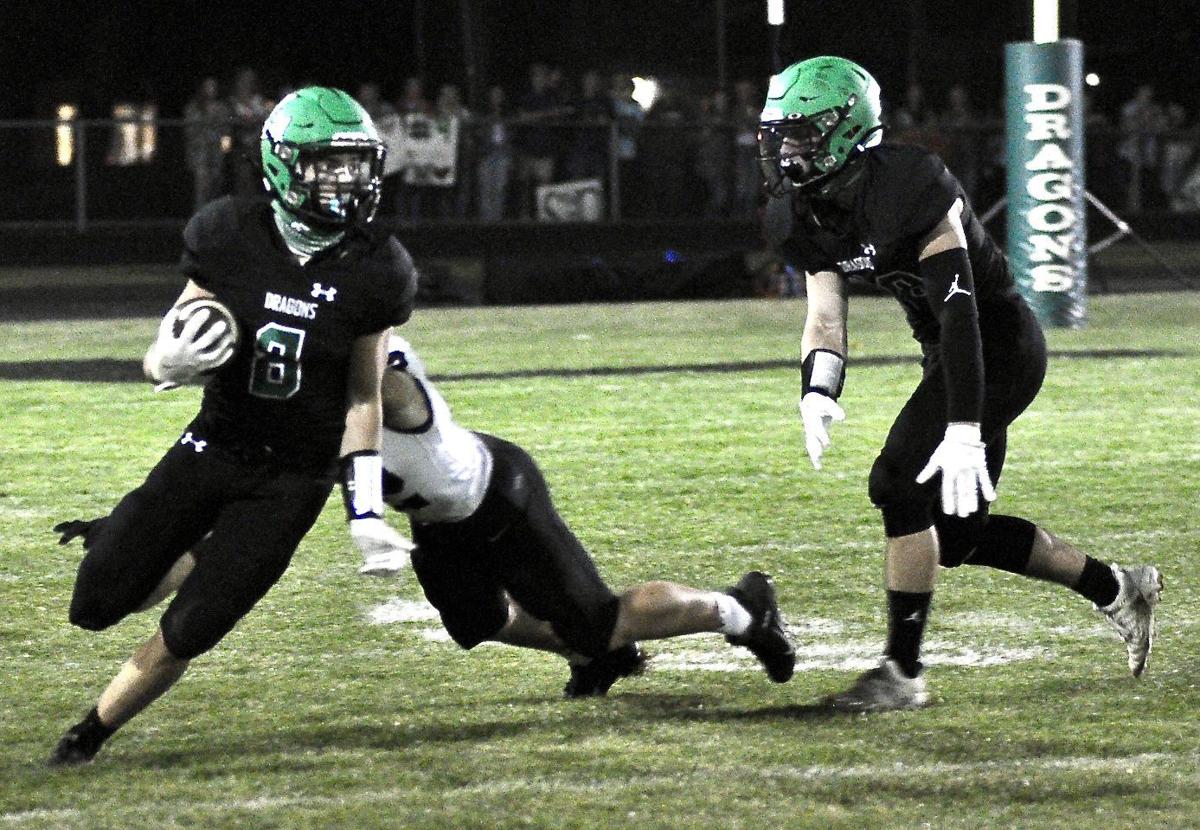 Logan Kings runs outside on his only carry of the game. The Litchfield junior was much busier on defense, where he led the Dragons with 15 tackles. 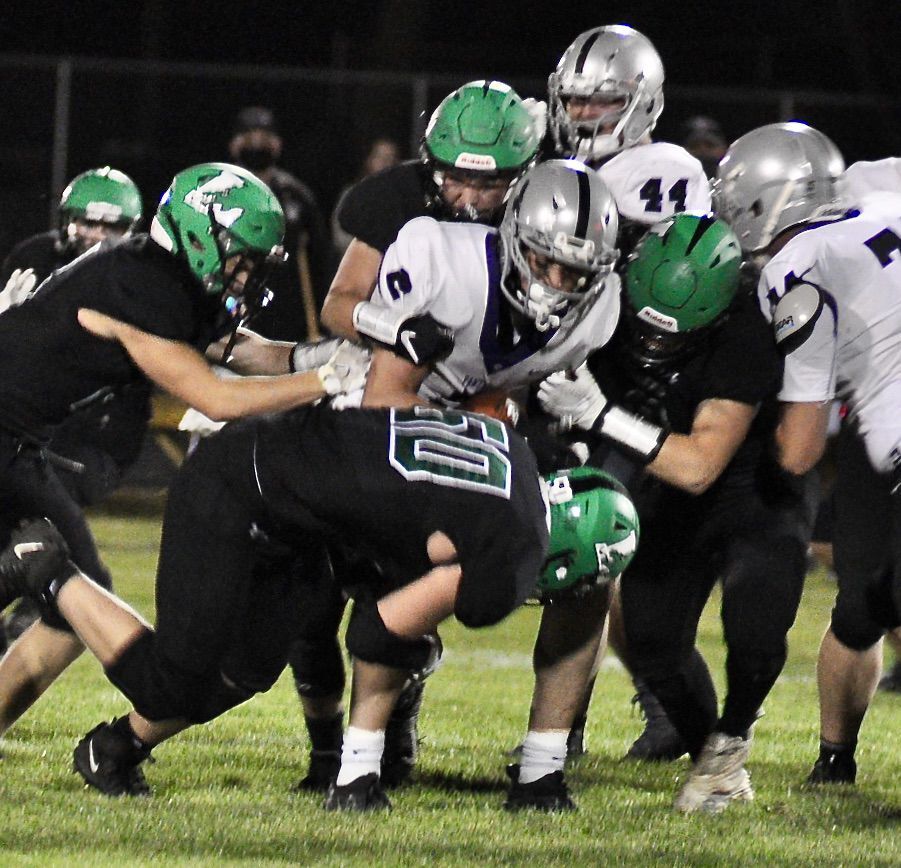 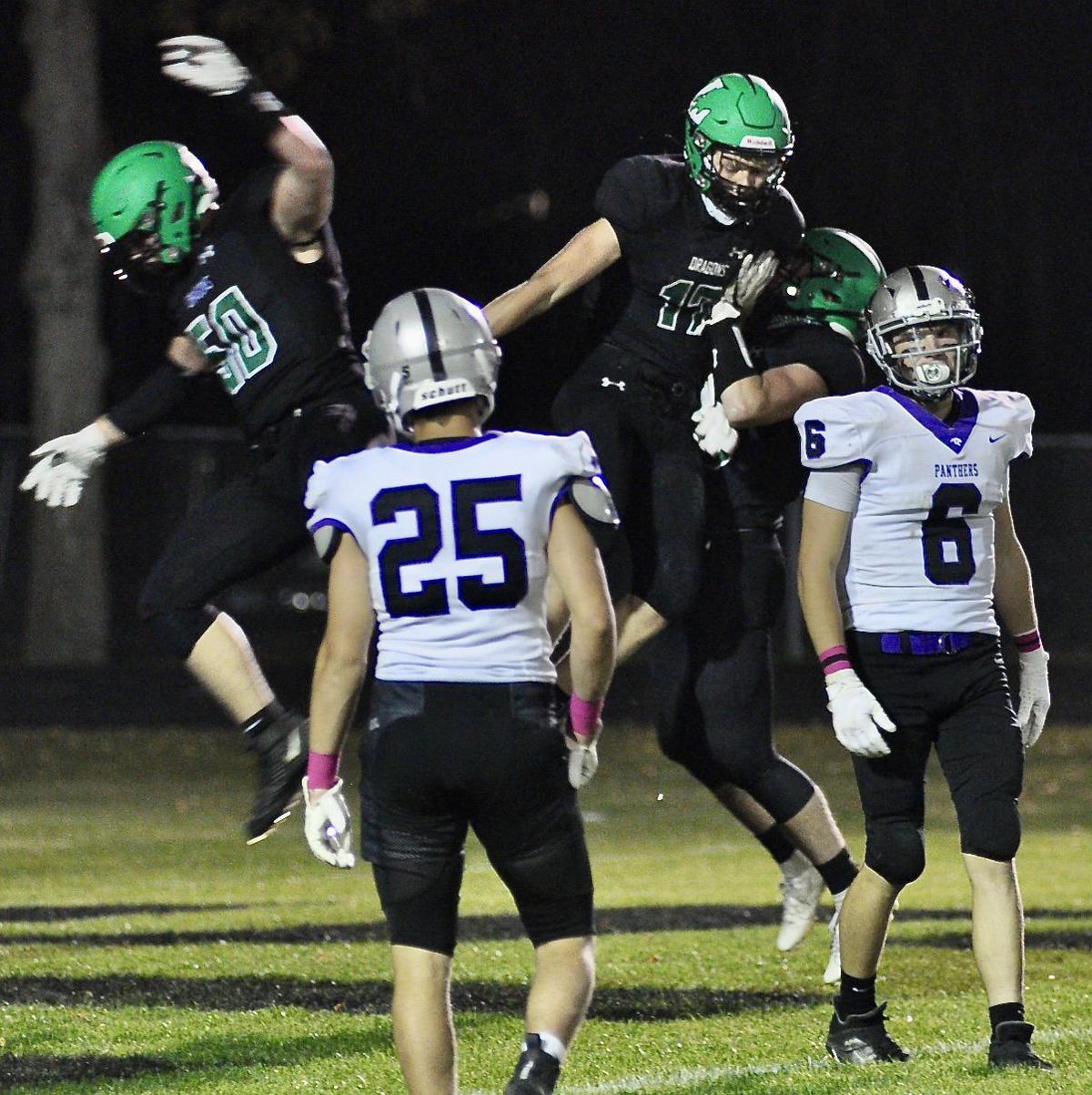 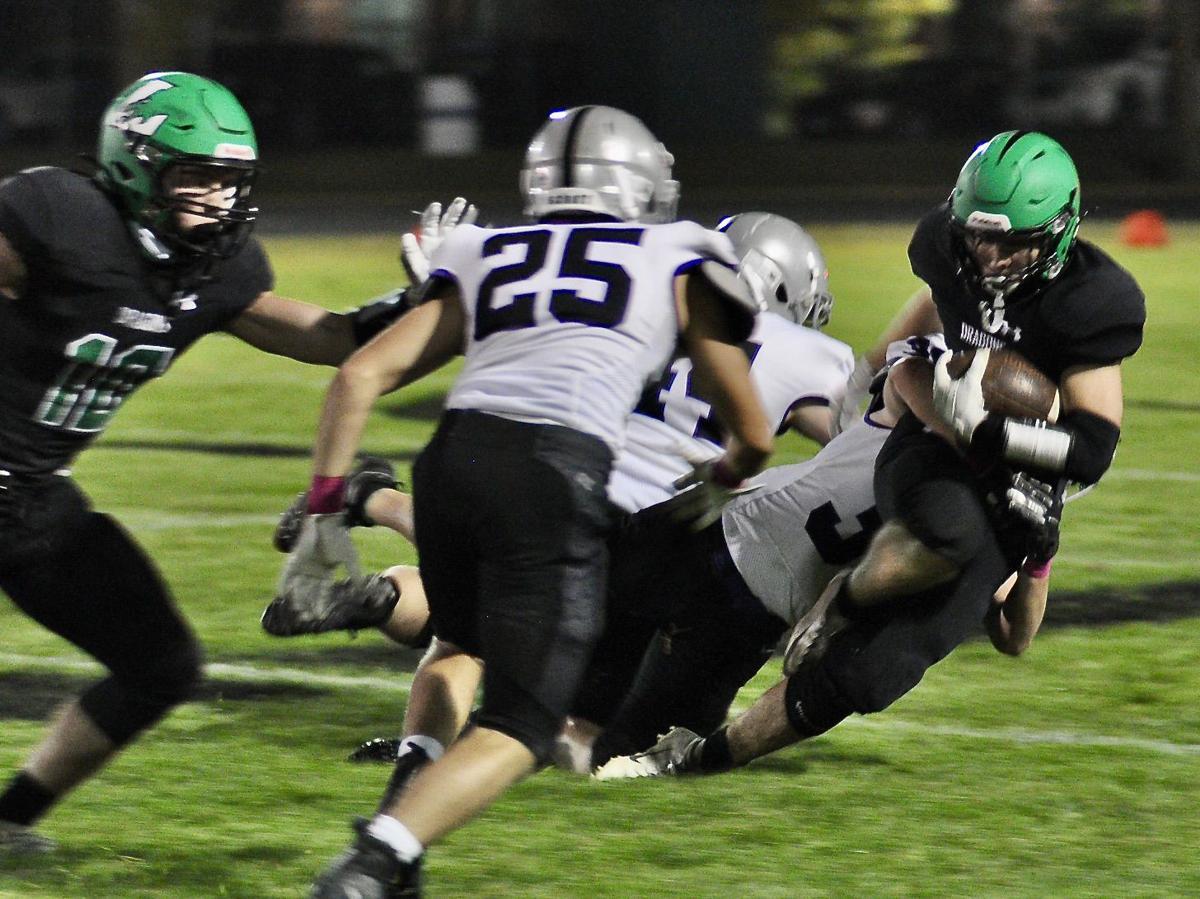 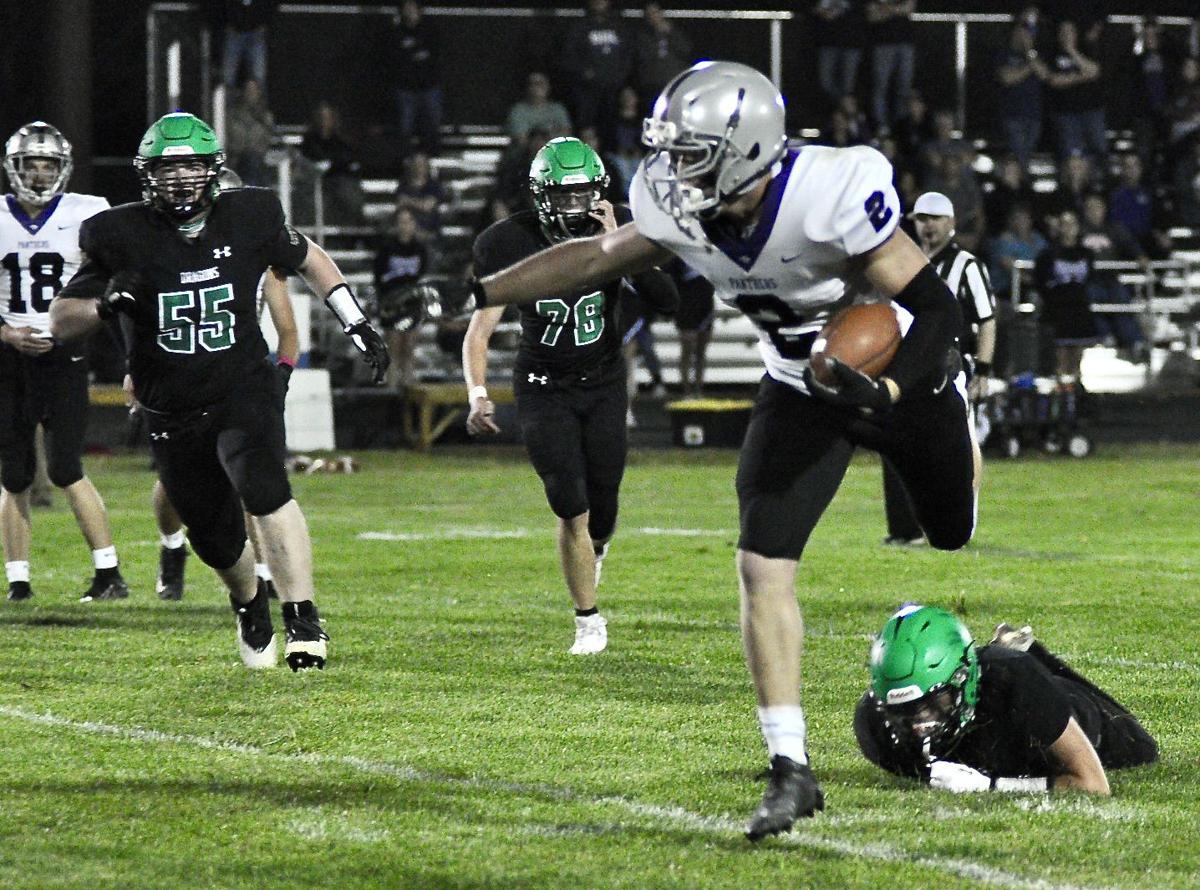 Litchfield senior Bennett Lecher carries on an end around, which he turned into a 39-yard touchdown run to cap the Dragons' scoring in a 34-14 win over Glencoe-Silver Lake Friday.

Logan Kings runs outside on his only carry of the game. The Litchfield junior was much busier on defense, where he led the Dragons with 15 tackles.

It was destined to be an out-of-the ordinary opener to the high school football season.

Yet the first game, played on the second Friday in October – six weeks later than usual opener due to the coronavirus pandemic and the Minnesota State High School League’s indecision — still had the feel, weather-wise at least, to late-August with game time time temperature in the 70s.

And another thing that hasn’t changed much since last season: Litchfield’s offense still has the big-play capability that will giving opposing defenses nightmares.

The Dragons struck for three touchdowns of more than 30 yards as they rolled past Glencoe-Silver Lake 34-14 Friday before a pandemic-restricted crowd at Litchfield High School football field.

“Overall, you know, they came out with a lot of fire, did a lot of good things,” Litchfield coach Jim Jackman said. “Offensively, obviously, any time you have a quarterback that’s played two and a half years, and then the receivers that we have, the juniors and senior group together, the football intelligence really helps.”

Senior quarterback Ben Alsleben, who completed 19 of 28 passes for 218 yards, opened the scoring on a 2-yard run that capped the Dragons’ opening drive of the game.

Then came one of the first big surprises of the game, as the Dragons recovered the ensuing short kickoff by freshman Garrison Jackman, the coach’s son, who placed ball to his left, between the first and second row of GSL’s blockers.

“Well, that’s something we’re going to be seeing more,” Jackman said. “Garrison has spent a lot of time kicking in the last six months. And he’s, obviously pretty small, but he’s a kid that can put it where we need to put it. He put it where he was told to put it.

“It was one of those situations where that second row guy was playing really, really deep, and there’s a hole right there,” Jackman added. “So, you know, that’s just one of those zones that we kick to, and put in the right spot, and the guys on that line know that, hey, the ball could be on the ground, I gotta get downfield right now, because it could be a live ball and get on top of it.”

Litchfield wasted little time capitalizing on that big play, using a little trickery on its first play from scrimmage. Alsleben through a backward pass to senior receiver Bennett Lecher on the right side, who found senior Tyson Michels wide open for a 33-yard touchdown.

“To be honest with you … where it’s 75 degrees and sunny, there’s no big wind, you know, I couldn’t ask for anything better,” Jackman said of the of the near-perfect game conditions for the Dragons passing game.

Not everything was perfect for the Dragons, however, as they were flagged for 11 penalties and 70 yards. Nowhere was that problems more evident than late in the first half, when Litchfield was flagged twice deep in GSL territory, with one of those penalties wiping out a 15-yard touchdown pass.

That series, which followed a fumble recovery by the Dragons on the GSL 9-yard line, was one of extreme highs and lows. Michels actually appeared to score on three different plays. On the first, officials ruled Michels did not control the ball as he crossed into the endzone. The second was lost by a penalty. And on the third, Michels’ toe-tapping catch was ruled out of bounds.

Michels, who finished with six receptions for 122 yards, had his revenge midway through the quarter, however, as he grabbed a 32-yard scoring pass from Alsleben to put the Dragons up 21-0.

Alsleben added another 1-yard run for a touchdown, and Lecher capped the Dragons’ scoring a 39-yard run late in the fourth quarter. Lecher proved a true triple threat as he accounted for 135 yards and two touchdowns, including his 33-yard first-quarter touchdown pass to Michels, his eight receptions for 63 yards, and his 39-yard touchdown run.

…(D)efensively we got a couple turnovers that made a difference,” Jackman said. “You look at GSL and in the past, they have hit us with some big plays. We’ve been unable to stop the big plays, you know, for touchdowns and things like that. Assignment-wise, I thought our defense played very well. Hitting guys, you know, hitting their aiming points and taking away some of things they like to do. I think we were prepped pretty well.”