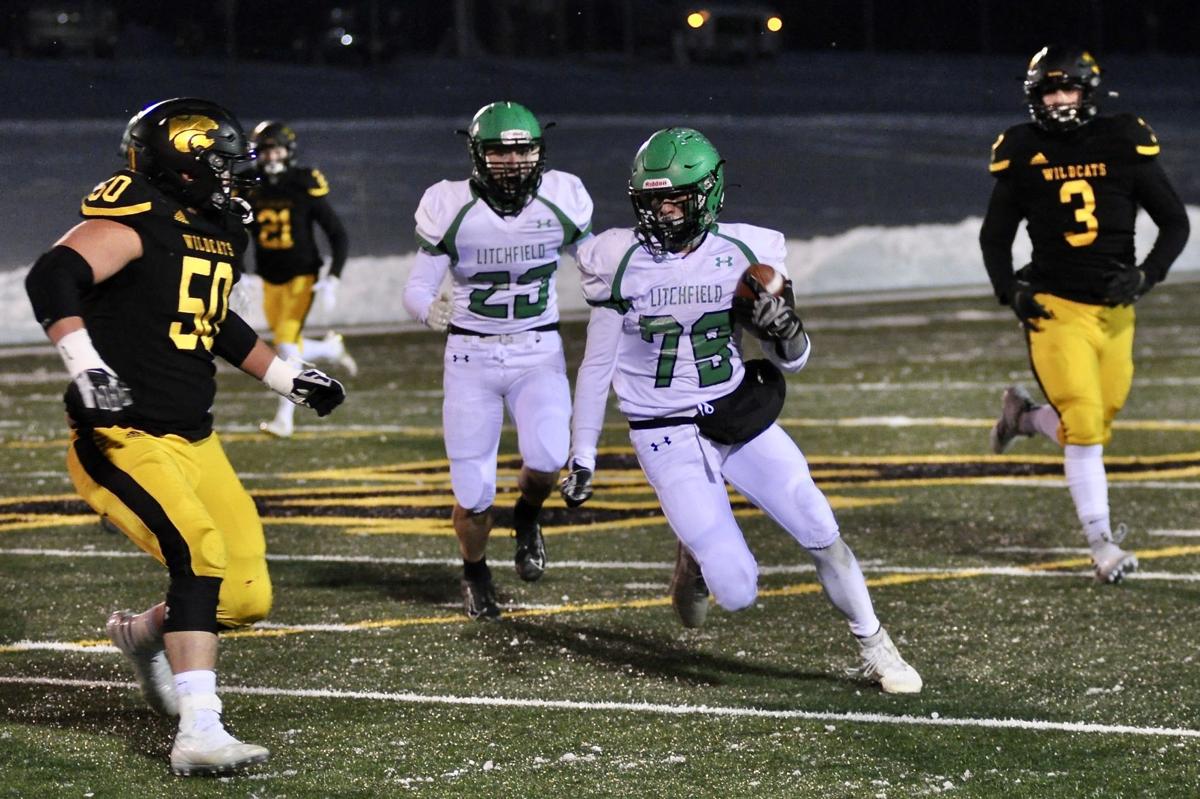 Senior defensive end Maison Olson turns into a ball carrier after intercepting a pass in the first half. It was the first of two interceptions for the Dragons, who allowed just 63 yards passing in a 39-12 win over New London-Spicer Thursday. 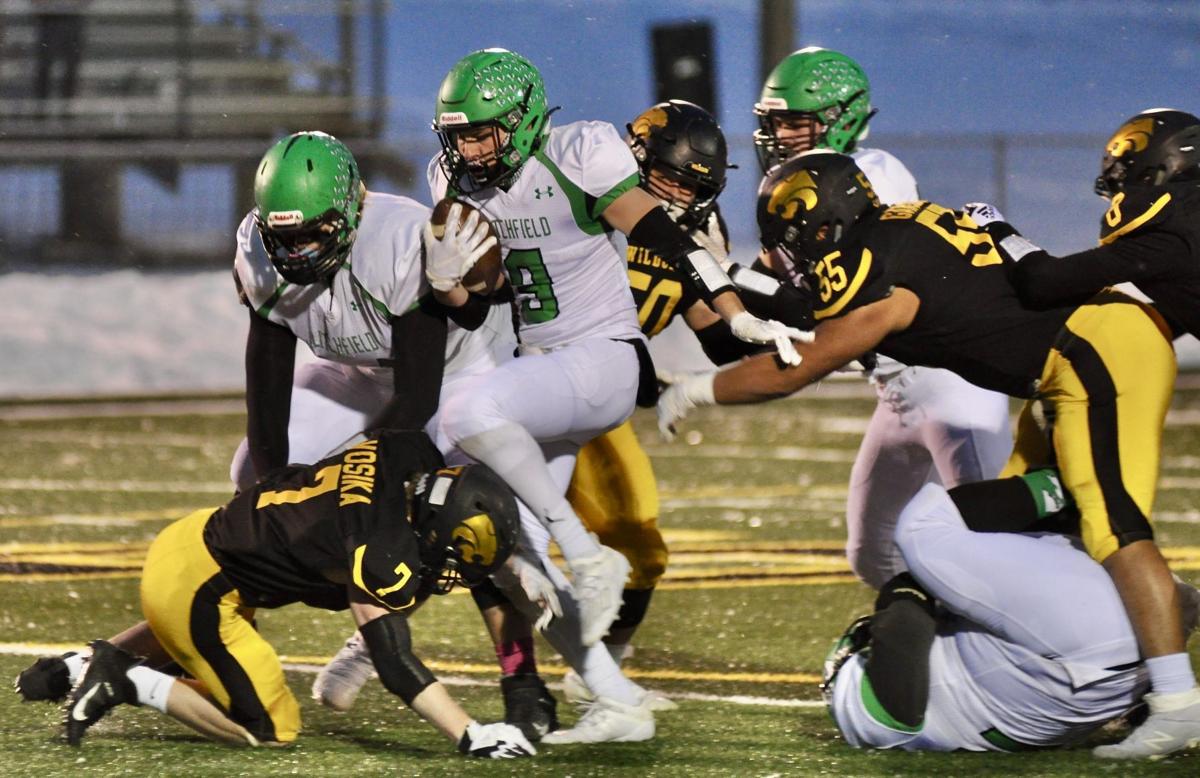 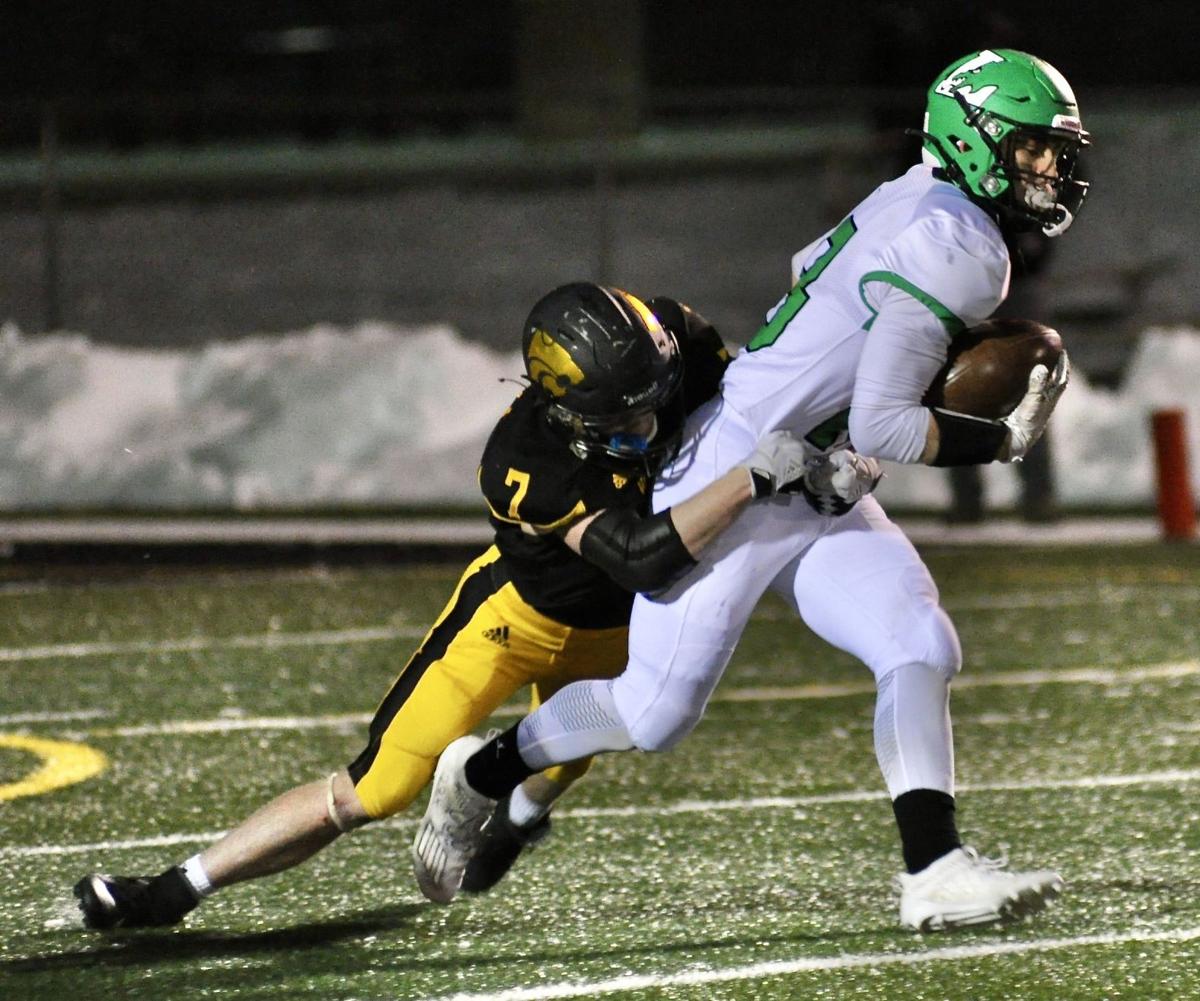 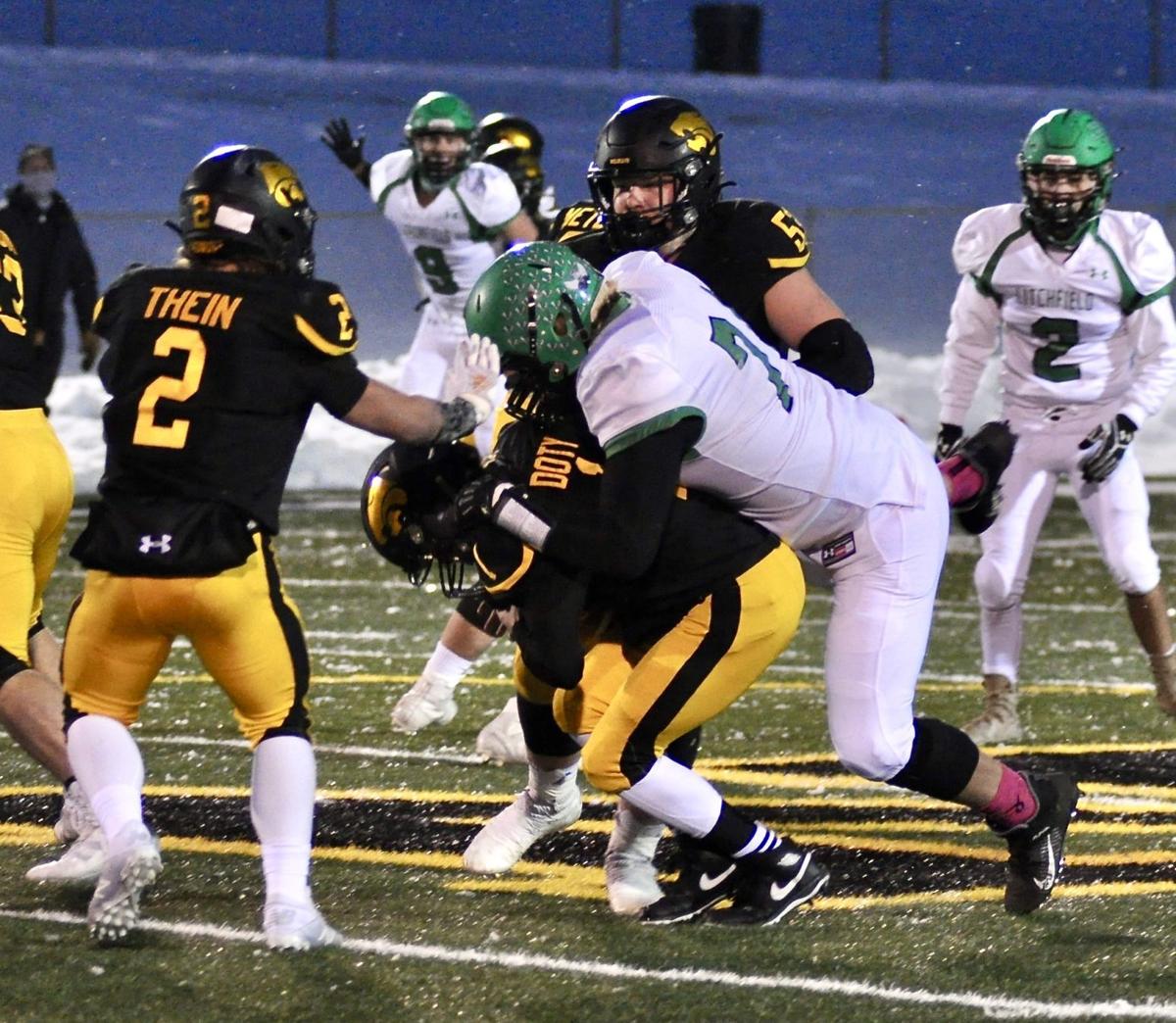 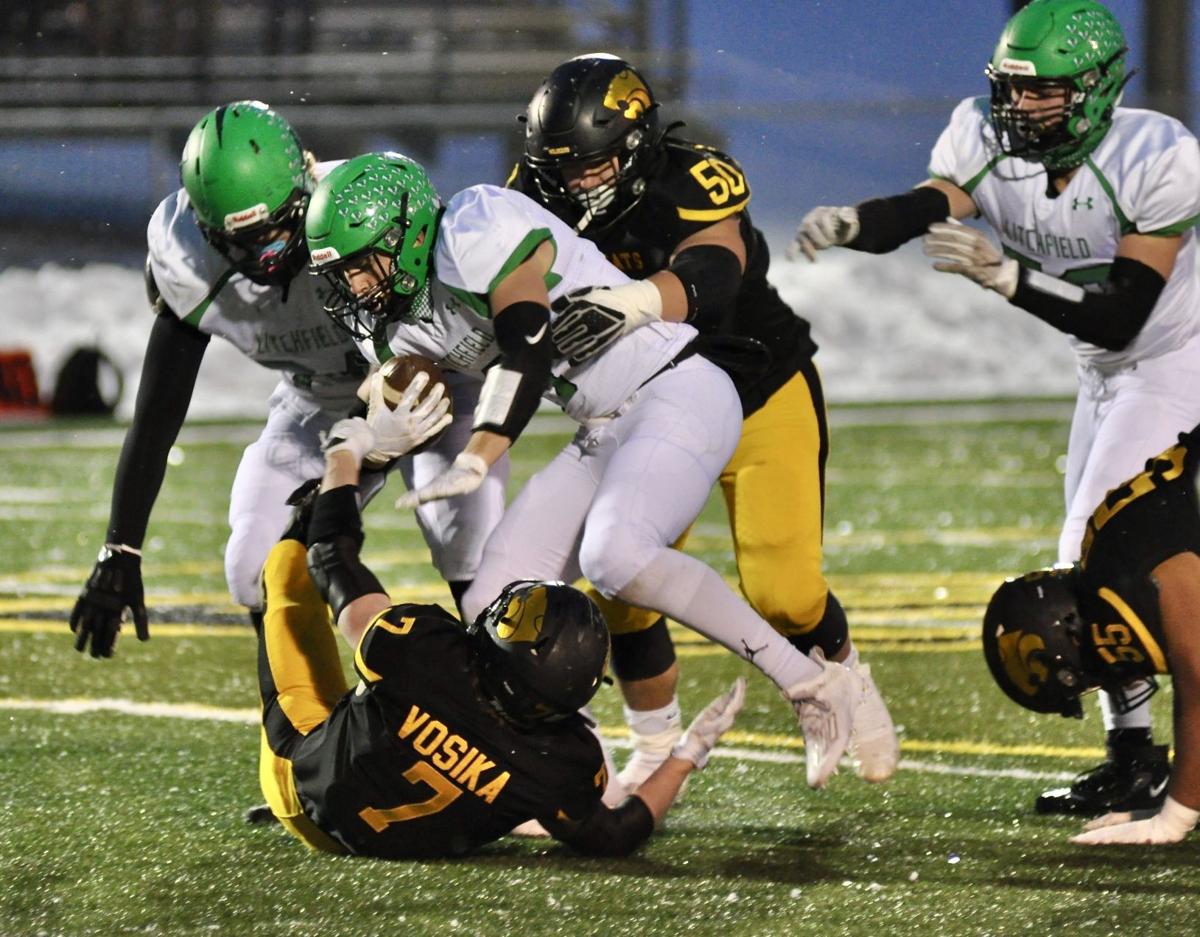 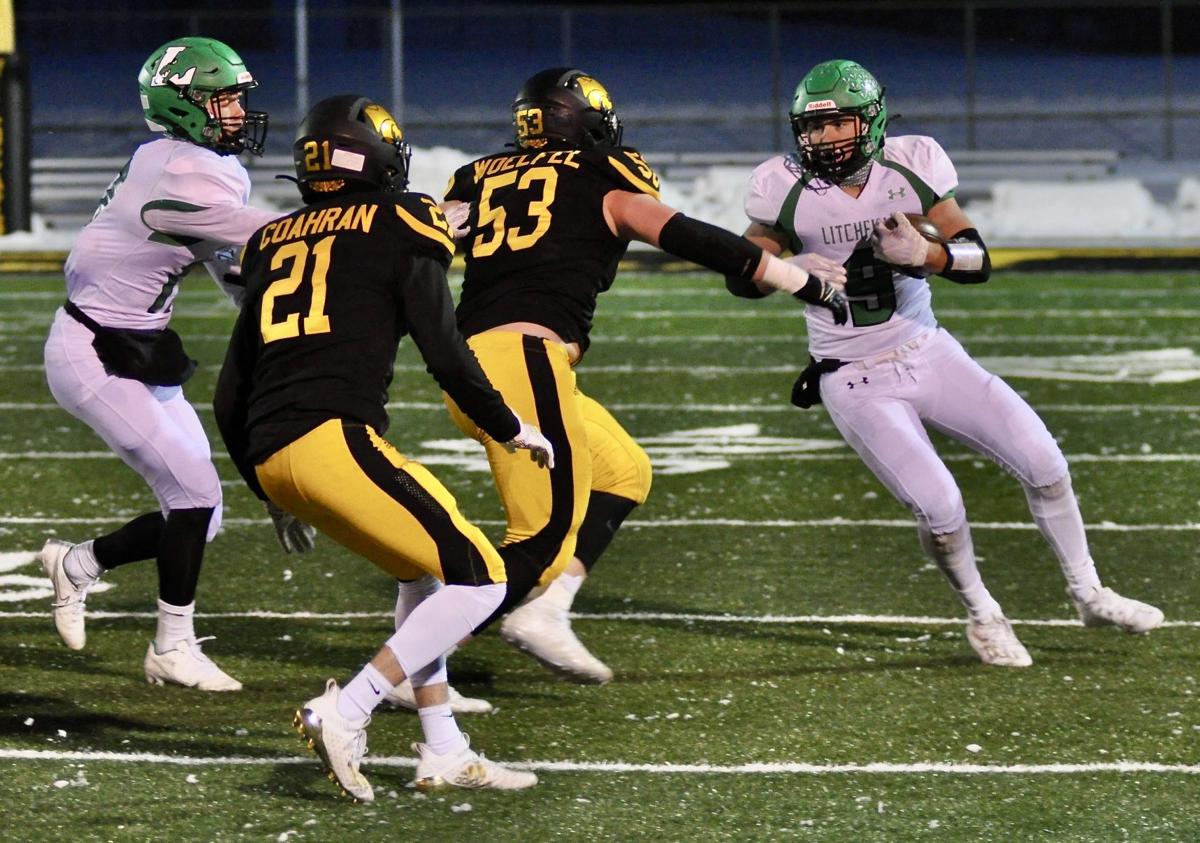 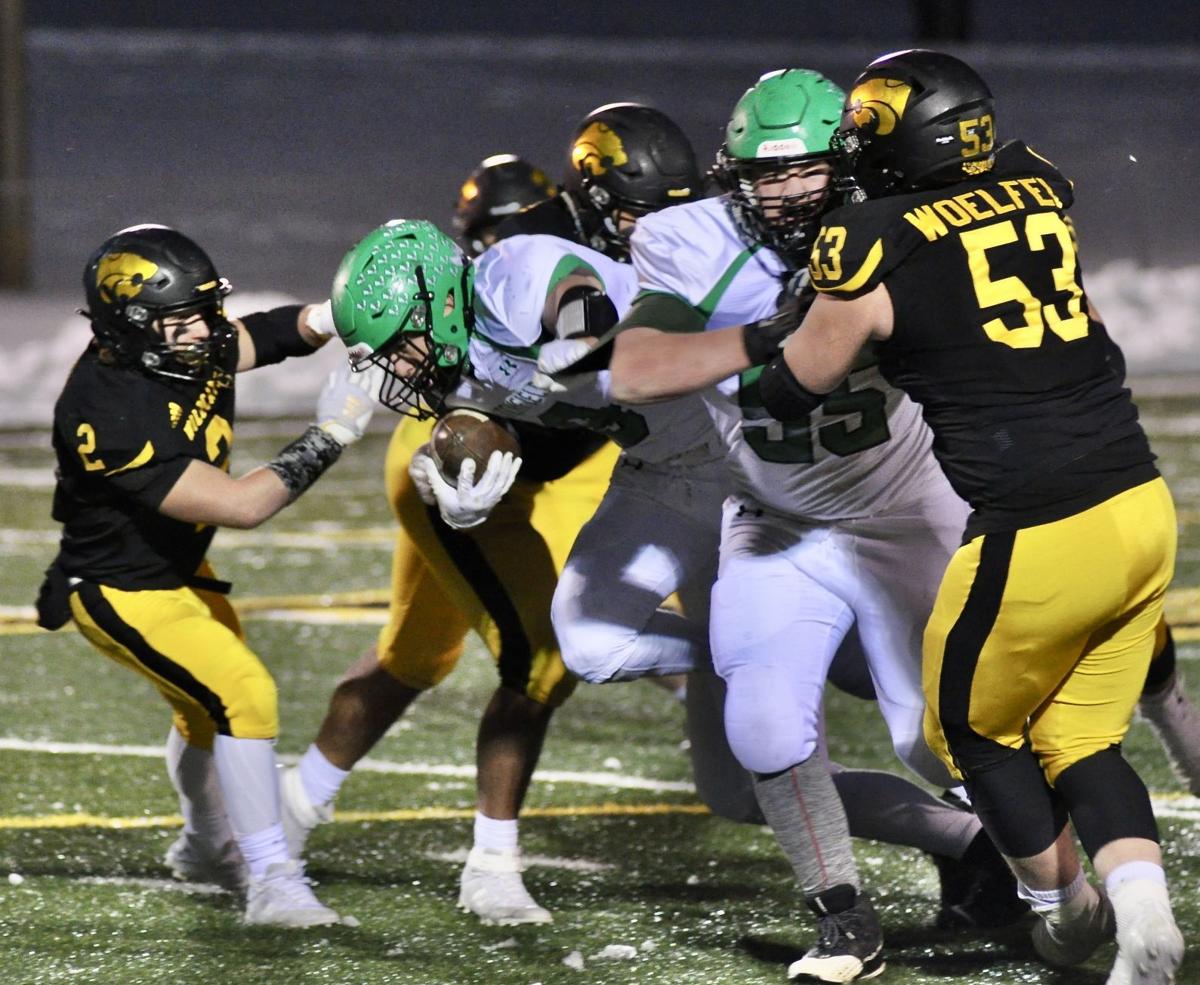 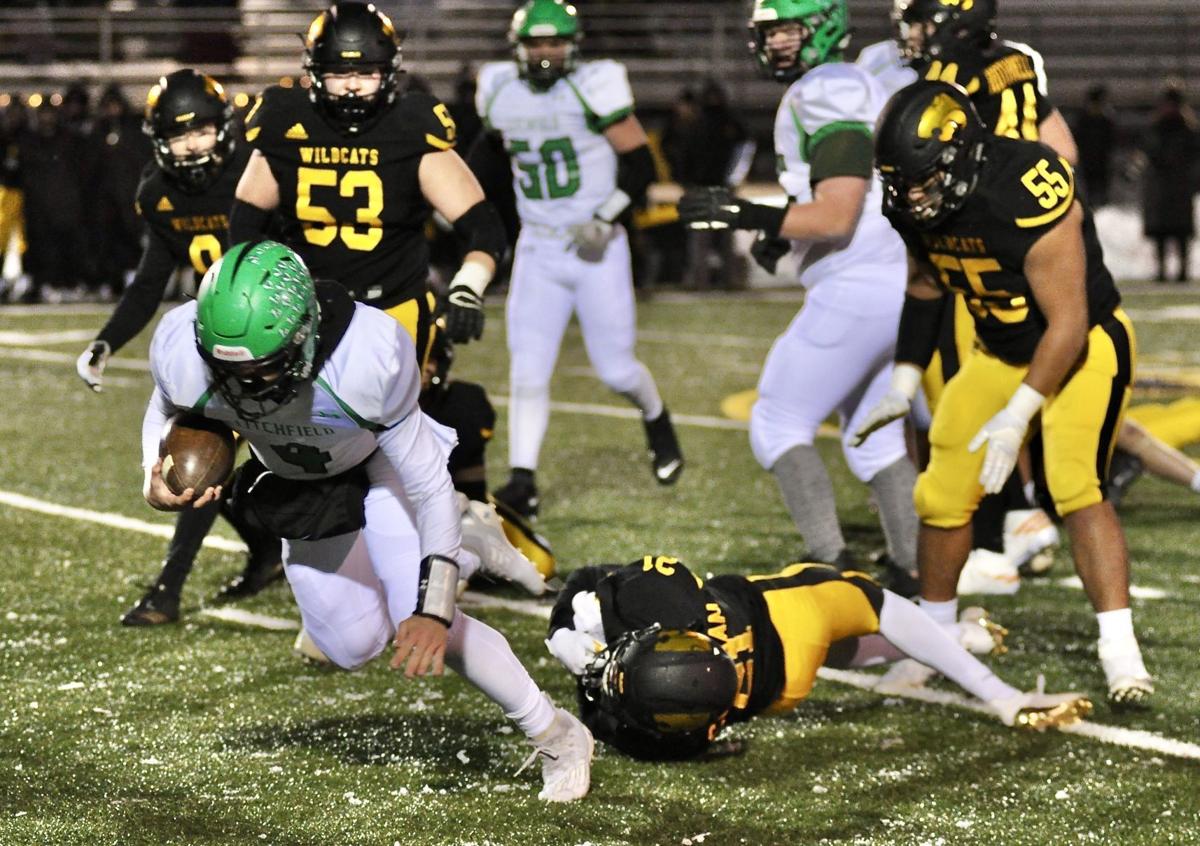 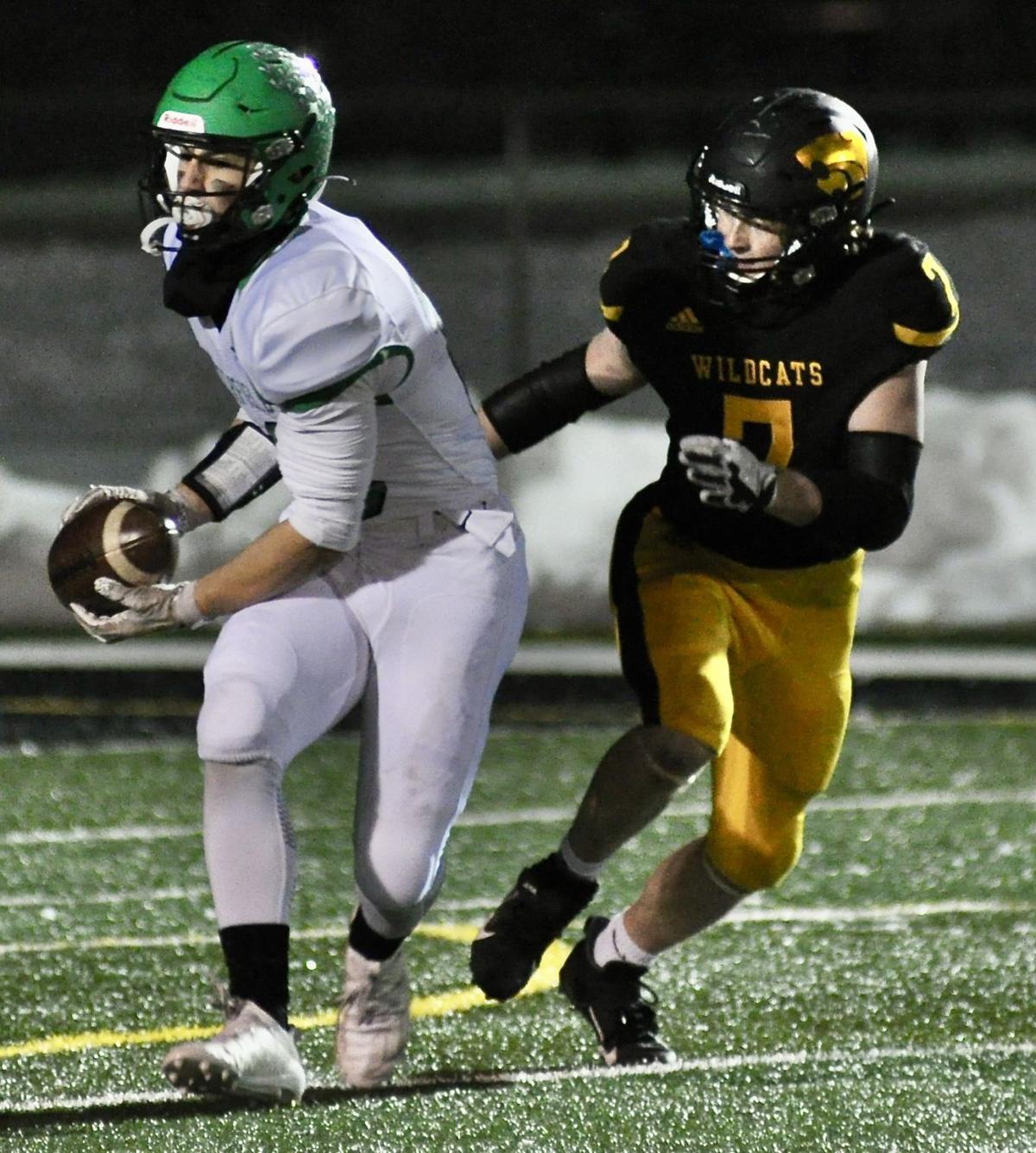 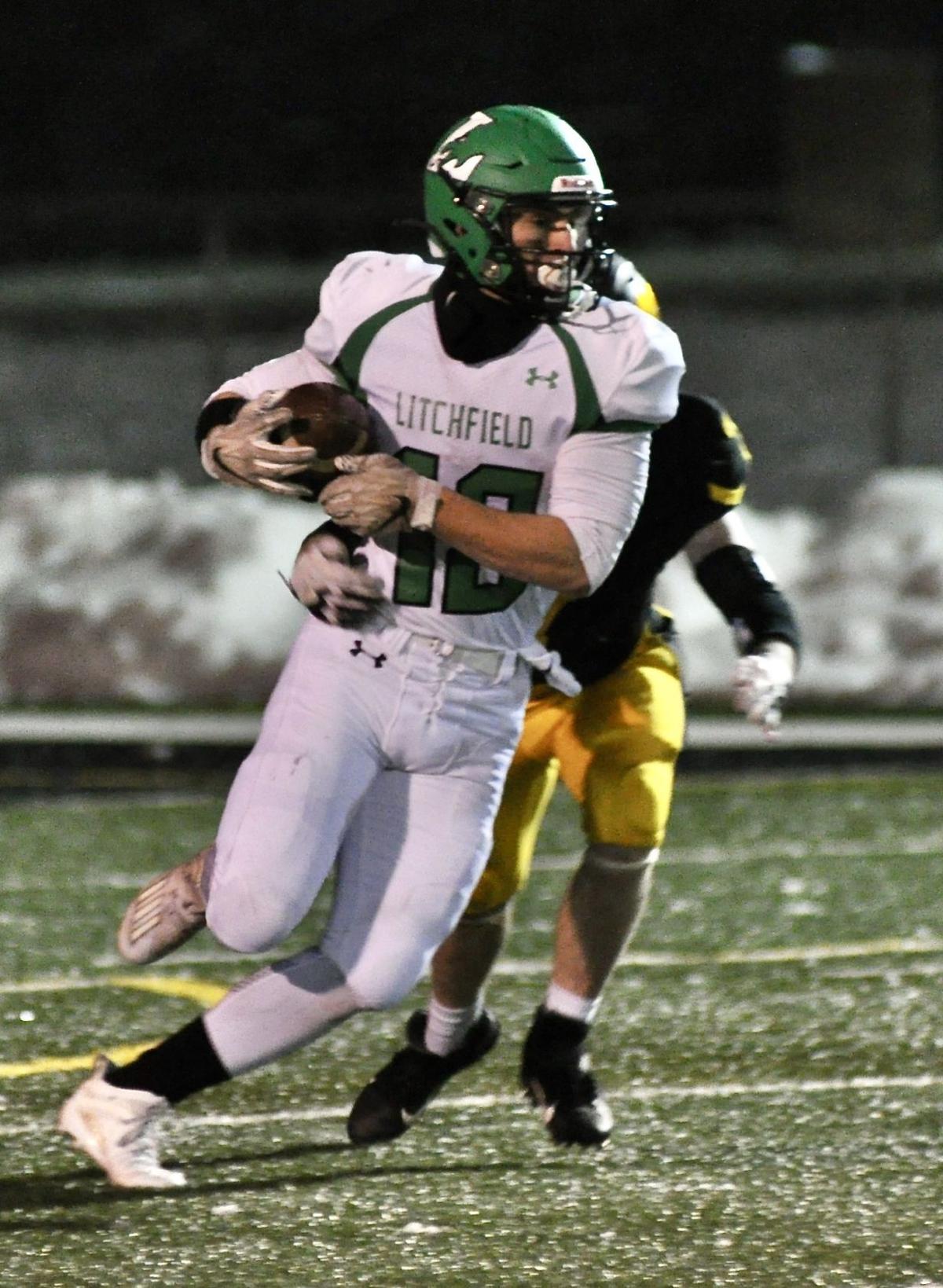 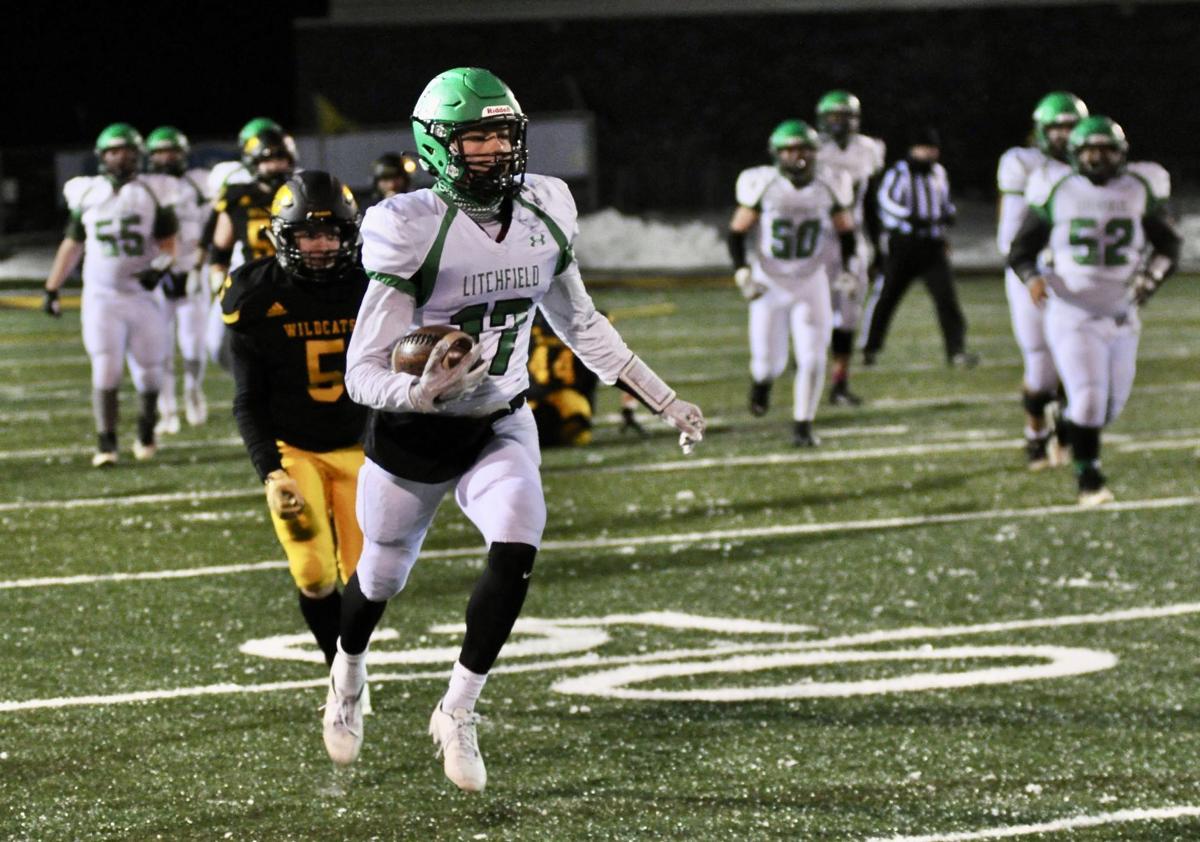 Litchfield senior Tyson Michels picks up big yards on a second half reception during the Dragons' game against New London-Spicer last week. 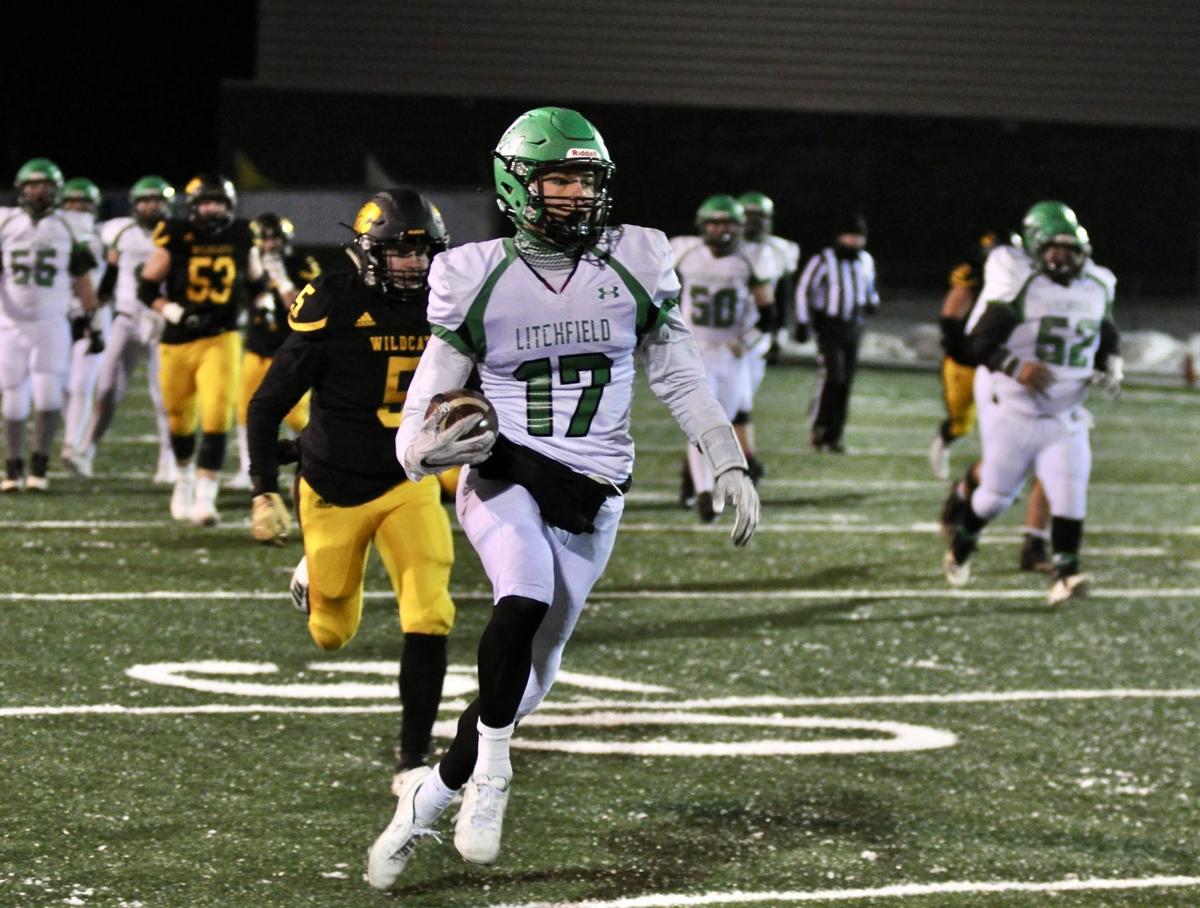 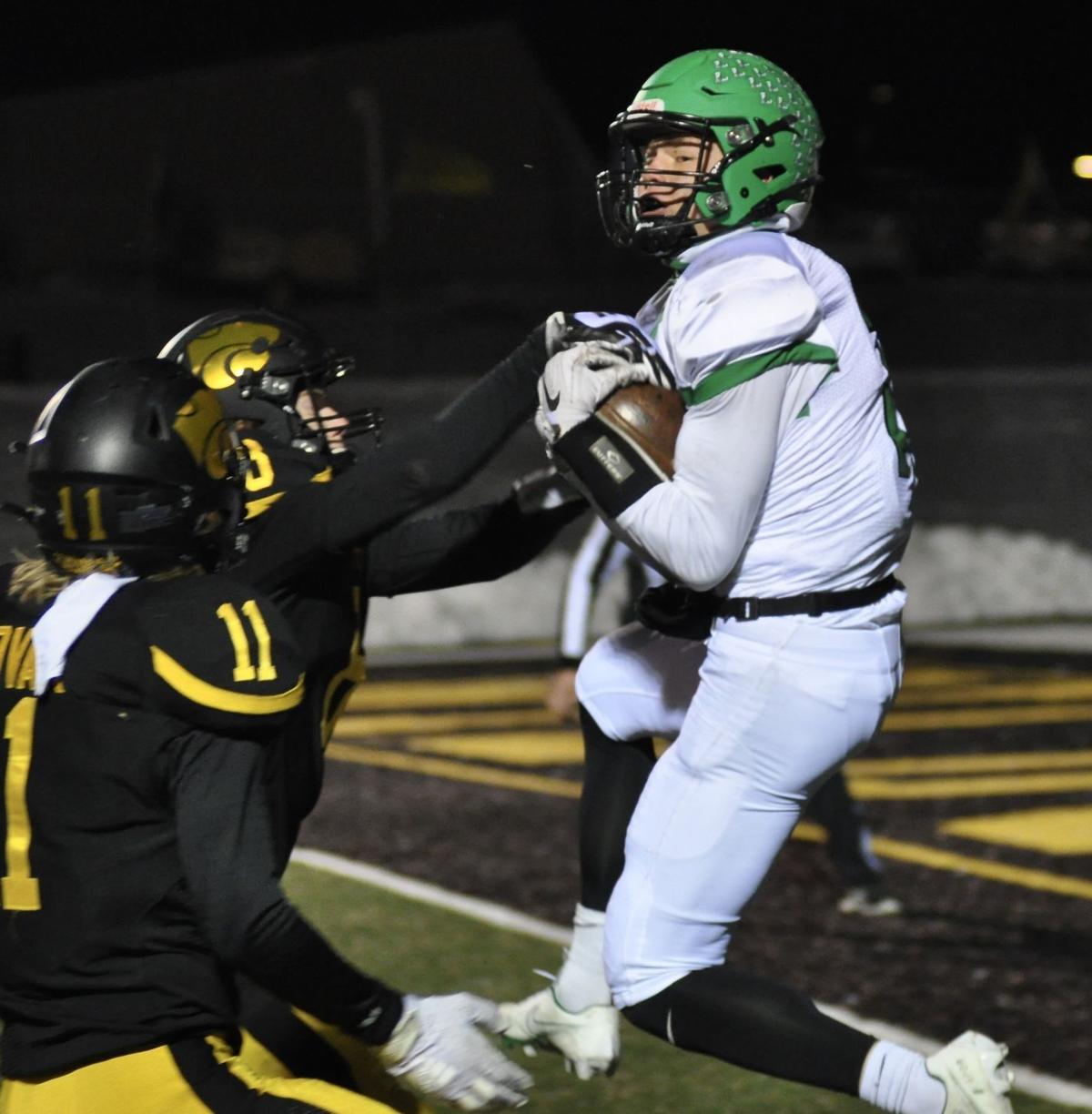 Senior defensive end Maison Olson turns into a ball carrier after intercepting a pass in the first half. It was the first of two interceptions for the Dragons, who allowed just 63 yards passing in a 39-12 win over New London-Spicer Thursday.

Litchfield senior Tyson Michels picks up big yards on a second half reception during the Dragons' game against New London-Spicer last week.

Jim Jackman has not suddenly become a riverboat gambler.

But the uncertainties of this coronavirus-tainted season has made the Litchfield football coach a little more open to going off script, even taking a risk, in certain situations.

Late in the first half of Thursday’s game at New London-Spicer was another one of those situations where Jackman chose not to abide by the terms of “safe” football, and it helped propel the Dragons to a 39-12 win over New London-Spicer in the final game of an out-of-the-ordinary regular season.

“It’s a nice way to end the season,” Jackman said of the win, which lifted the Dragons to 5-1 on the season. “These kids love playing New London-Spicer. It’s kind of a rivalry between a lot of them, whether it’s football, basketball, baseball, you know, it doesn’t matter. They want to go at the Wildcats a little bit.”

There was no better illustration of that aggressive approach than late in the first half, when Litchfield senior defensive back Tyson Michels ended a New London-Spicer drive with an interception on the Litchfield 4-yard line.

With just 1:47 to go in the half, it seemed like time for the Dragons to pound a few runs into the middle of the line to run out the clock and take a 19-6 lead into halftime.

But as Jackman and his offensive coordinator Adam Hayes have proven in the past, as long they have the ball and a few ticks left on the clock, anything could happen.

Senior quarterback Ben Alsleben, fresh off a 300-plus yard passing performance at Albany a week earlier, connected with Bennett Lecher over the middle on a couple of 20-plus yard passes and threw to Michels twice on out routes to quickly and efficiently march down the field. Alsleben’s 24-yard completion to Lecher moved the ball to the 5-yard line, and Alsleben carried the ball up the middle for a touchdown and a 25-6 lead with 17.6 seconds to play in the first half.

Jackman hinted there wasn’t unanimity among the coaching staff on the end-of-half approach, but he also admitted a different kind of motivation in his play calling this season.

“Half our coaches are probably saying, ‘What are we doing?’ The other half want to go, go, go,” Jackman said. “And it’s kind of one of those things where, you know, my history, it’s probably, let’s just get out of here and go to the half.

“But, you know, with all the things that are happening right now, I want the kids just to play football, and we’ve got to let the kids enjoy the moment,” Jackman said. “Like I talked to the kids on the bus, this might be the last hurrah, who really knows? And if those kids want to gun and throw it around the last minute-twenty — obviously we need to get a first down, but when we get a first down, let’s see what happens — you know, let the kids play.”

Play they did. Litchfield racked nearly 450 yards of total offense while holding NL-S to 214 yards.

The passing game was again a highlight, with Alsleben completing 12 of 20 passes for 238 yards and four touchdowns. His senior receiving duo of Michels and Lecher each had more than 100 yards receiving and two touchdown receptions. In fact, Beau Weseloh, with one catch for 10 yards, was the only other Dragon with a reception.

Meanwhile, the Litchfield ground game had one of its best nights of the season, with six ball carriers amassing 210 yards rushing on 28 carries. Senior Drew Kotzer led the way with 11 carries for 90 yards, while Alsleben had nine carries for 75 yards.

It was a solid effort in less-than-perfect conditions for a pass-oriented offense, with a game-time temperature of 24 degrees and a slight breeze.

“This is a pretty good surface for us,” Jackman said of the artificial turf field at New London-Spicer High School. “We’re a pretty senior dominant team. Right now, as far as our skills kids, they’re happy doing what they’re doing, and I’m happy doing what we’re doing. Obviously, if the weather gets bad, we have to make some modifications … but the way tonight worked out is we were going to play our cards the way they were.”

It also gave the Dragons an unexpected playoff bye.

Litchfield, 5-1, was seeded No. 1 and pitted against No. 8 Belle Plaine, 0-5, in the first round of the playoffs. However, Belle Plaine Football Twitter feed announced in a Thursday tweet that its football program was being shut down due to COVID. "There will be no more practices or games for the remainder of this school year," the tweet read.

The Dragons will meet the winners of the quarterfinal matchup between No. 4 Dassel-Cokato (3-3 overall) and No. 5 Watertown-Mayer (2-4). That semifinal matchup is scheduled for a 2 p.m. Saturday, Nov. 21, kickoff at Litchfield High School football field.

If seeding holds, it would be a rematch of last year's section semifinals, where Litchfield met Dassel-Cokato on its home field.