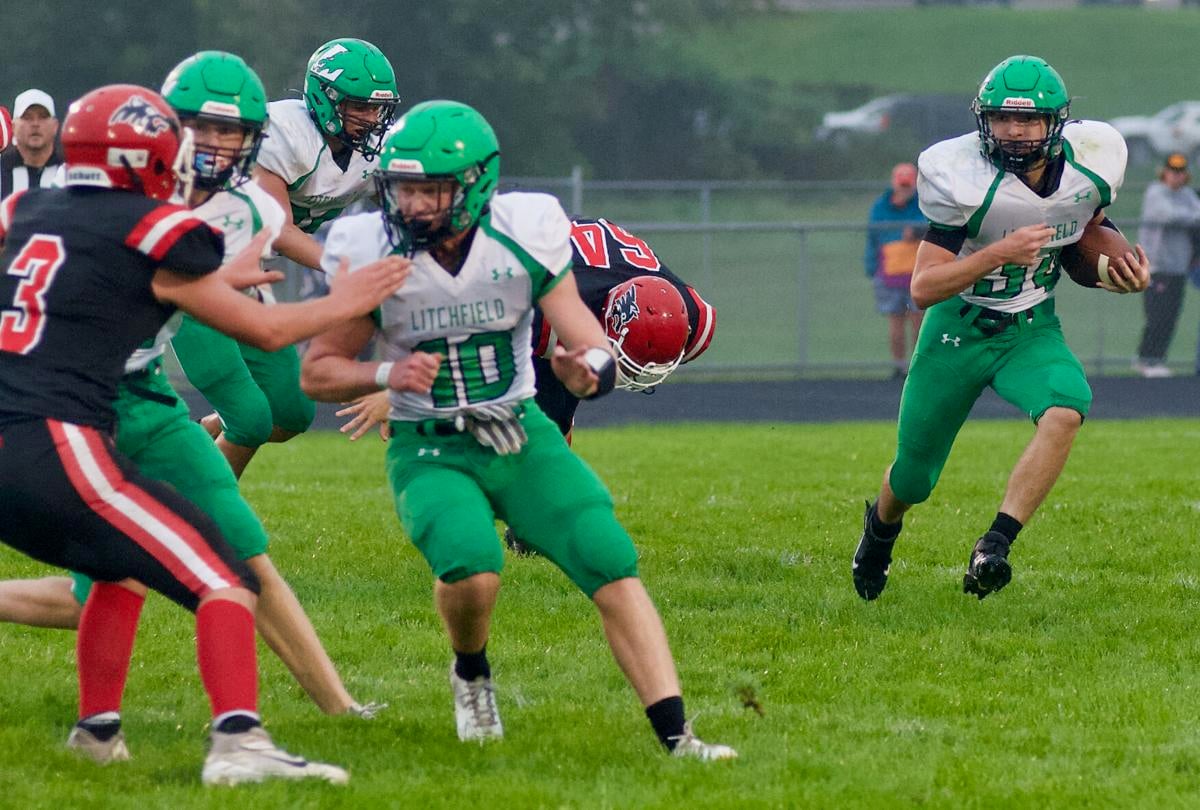 Litchfield sophomore Lukas Kuehl takes off on one of his 21 carries on the nights. Kuehl had 242 yards and three touchdowns as Litchfield topped Milaca 32-8 Friday. 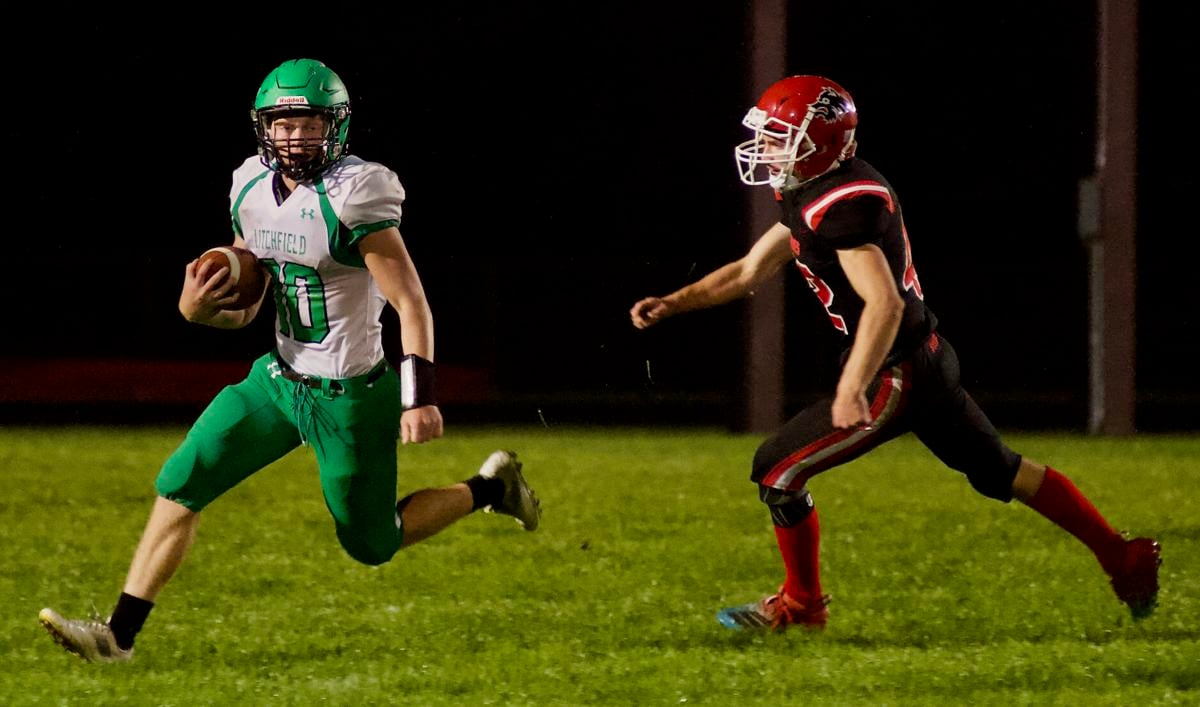 Ryan Schutz takes off after one of his six catches. The senior receiver had 124 yards receiving. 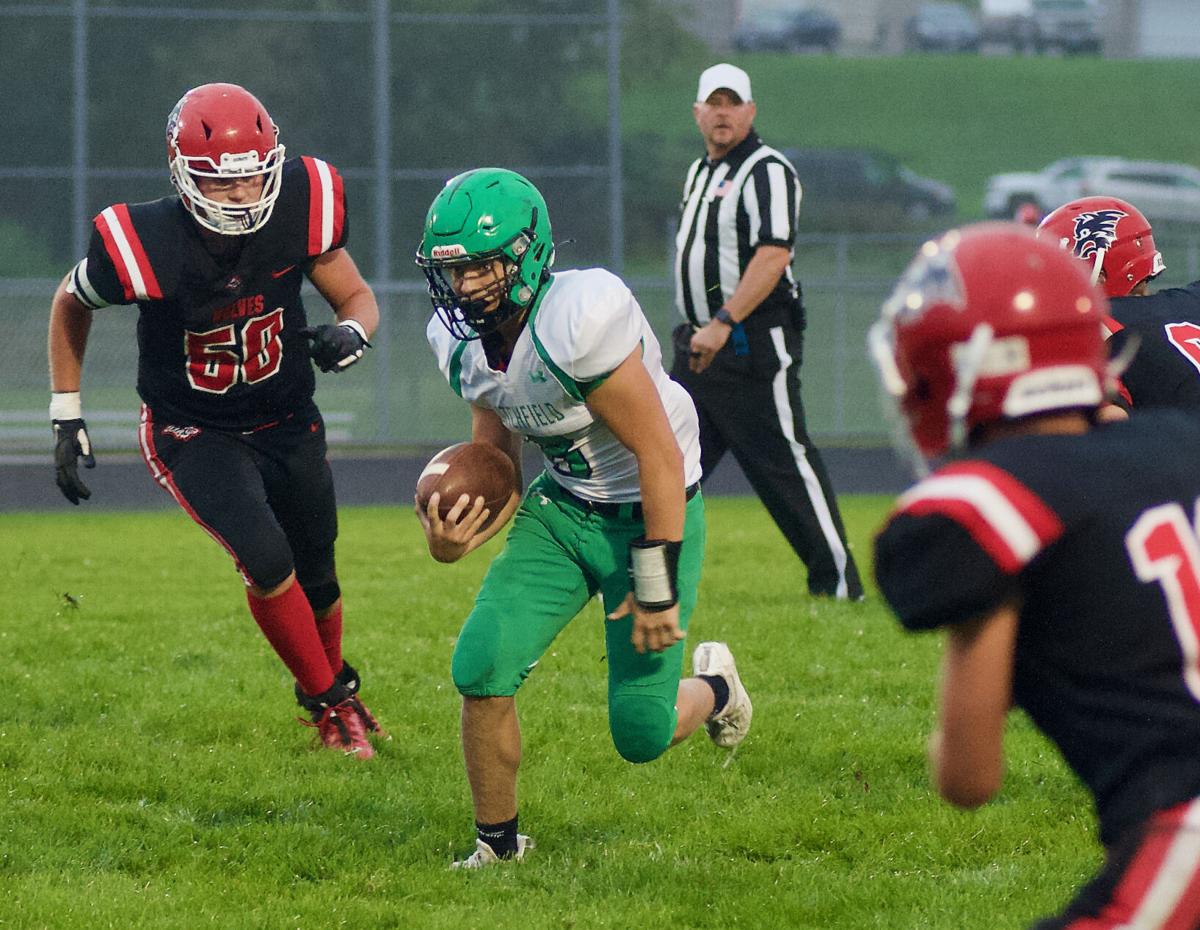 Litchfield sophomore Lukas Kuehl takes off on one of his 21 carries on the nights. Kuehl had 242 yards and three touchdowns as Litchfield topped Milaca 32-8 Friday.

Ryan Schutz takes off after one of his six catches. The senior receiver had 124 yards receiving.

Like students taking their first big test of a new school year, the Litchfield football team could feel pretty good about having most of the answers Friday.

Powered by sophomore Lukas Kuehl’s 242-yard, three-touchdown performance, the Dragons cruised by a 32-8 win over Milaca.

“Lukas put up some big yards tonight,” Litchfield coach Jim Jackman said. “But you know, our offensive linemen, there’s I think, there’s some concerns with some new guys coming in. But those guys battled all night. Obviously, we’re going to still watch the film, but they continued to battle and they ran, moved their feet, and there wasn’t a lot of watching.”

The watching from a Litchfield fan perspective, however, was pretty good as the Dragons amassed more than 500 yards on offense, including a ground game that chewed up 335 yards.

Kuehl got the Dragons on the board first, scoring on a 9-yard run with just less than three minutes gone in the game.

Milaca looked like it would answer quickly, too, as it drove nearly the length of field before being stopped on downs at the Litchfield 10-yard line.

And the Dragons responded by mounting a 90-yard scoring drive, capped by a 5-yard touchdown run by Kuehl that gave them a 13-0 lead.

Senior Kole Bartlett got Litchfield’s next touchdown on a 3-yard run, and Kuehl closed out Litchfield’s first-half scoring in a big way with a 60-yard touchdown run with 3:10 to play in the half, giving the Dragons a 26-0 lead.

Litchfield finished its scoring with a 16-yard pass from King to Tanner Kohls, who went up over a Milaca defender to pull in the touchdown with 1:29 to go in the third quarter.

It was part of an efficient and effective performance from King, who was making his first varsity start at quarterback. He completed 11 of 13 passes for 158 yards. His favorite targets were Schutz, who had six catches for 124 yards, and Kohls, who caught five for 22 yards.

After getting their first touchdown on a turnover, the Dragons’ next three scores came after their defense stopped Milaca on downs, the first on the Litchfield 10, the next two on the 25.

The stops were the result of a kind of bend-but-don’t-break defensive effort from Litchfield, which allowed 310 yards, including 226 on the ground – but didn’t give up a score until late in the fourth quarter.

“Any time you play a team that runs a lot of option football … hopefully we’re going to find a way to make some plays and make some turnovers,” Jackman said. “They ran the ball really, really well, I thought, with their option game. We don’t see that all the time in the league that we’re in.

More photos of Litchfield's 32-8 win over Milaca can be found here.