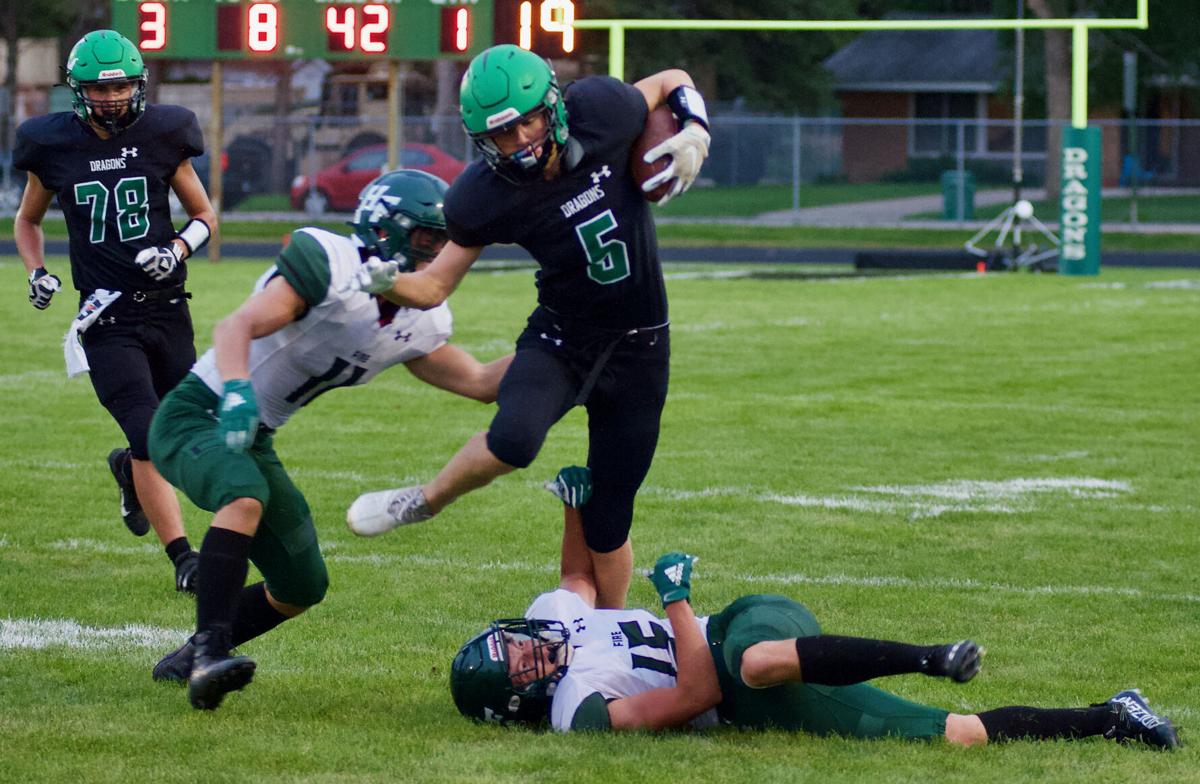 Litchfield receiver Mason Woelfel hurdles one would-be Holy Family defender while trying to avoid another after catching a pass in the first quarter. Woelfel, who’s in his first season of football, had three receptions for 43 yards Friday. 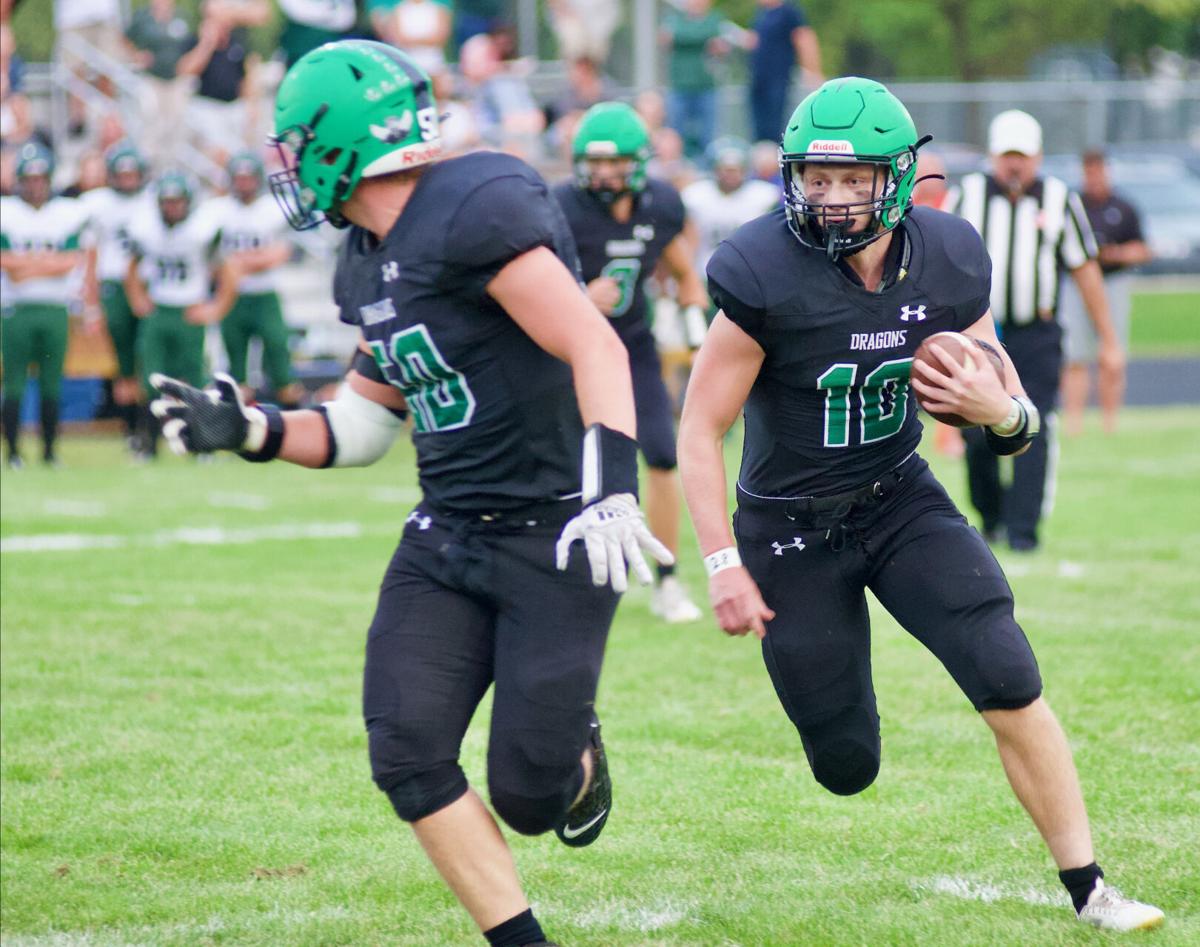 Ryan Schutz, who scored three first-quarter touchdowns, takes off on a run around left end with lineman Wyatt Larson leading the way. 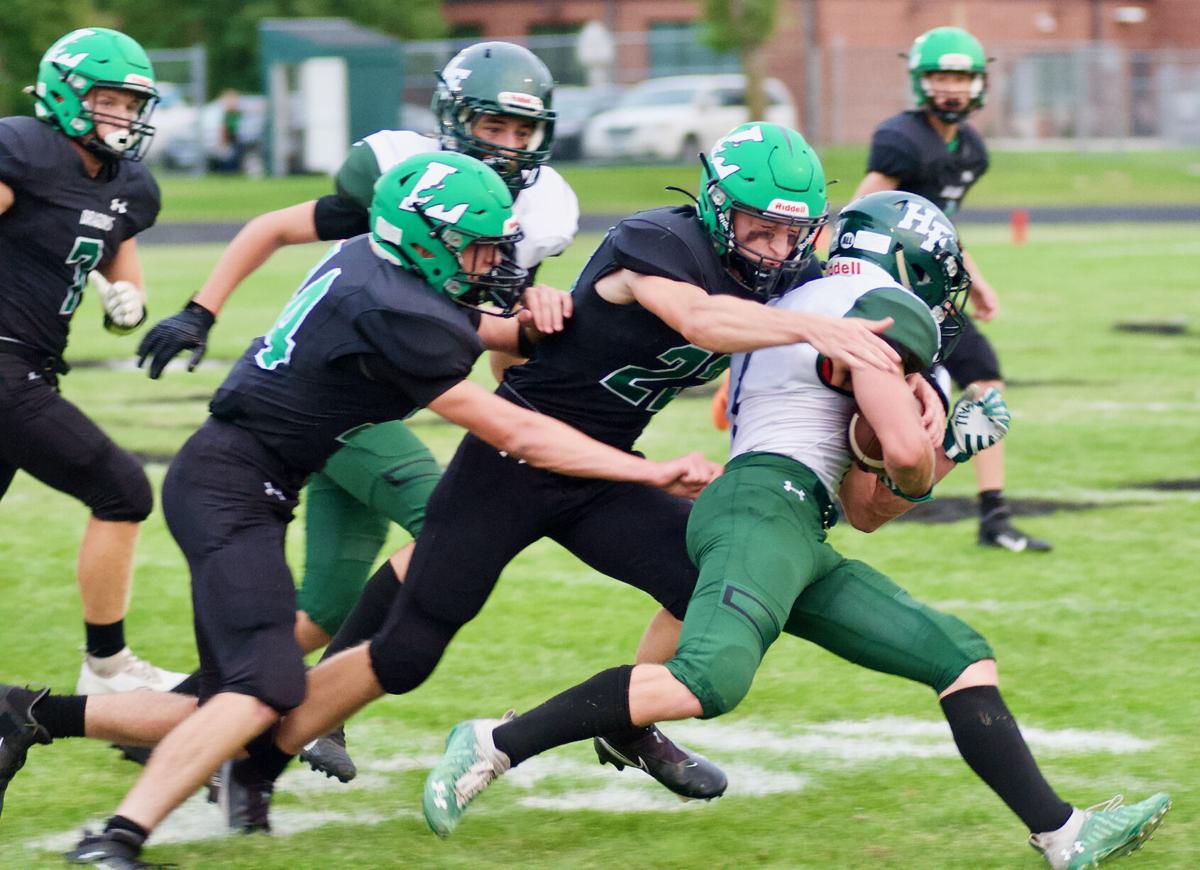 Litchfield receiver Mason Woelfel hurdles one would-be Holy Family defender while trying to avoid another after catching a pass in the first quarter. Woelfel, who’s in his first season of football, had three receptions for 43 yards Friday.

Ryan Schutz, who scored three first-quarter touchdowns, takes off on a run around left end with lineman Wyatt Larson leading the way.

Before the season began, Litchfield football coach Jim Jackman said the goal would be steady improvement. Better every game.

“You know, we didn’t play a perfect first half,” Jackman said. “I mean, there’s still some things that we have to correct.”

Indeed, Litchfield may not have been perfect. It only seemed that way on the scoreboard in the first half as the Dragons seemingly scored at will, piling up nearly 400 yards on offense, while stifling the Holy Family attack and building a 42-0 lead.

Senior wide receiver Ryan Schutz provided much of the Dragons’ offensive spark in the first half, scoring three touchdowns, including a 25-yard scoring catch and two runs. Schutz caught five passes for 94 yards and also ran for 36 yards on three carries, including a 29-yard run for the Dragons’ first score and a 2-yard touchdown on a jet sweep later in the first quarter.

Litchfield built a 28-0 lead in the first quarter as it continued to flash the big-play capability that some might have wondered if they would have this season after graduating many offensive weapons last year.

Sophomore Lukas Kuehl provided another highlight reel run with an 80-yard scamper that gave the Dragons a 14-0 lead with 6:47 to play in the first quarter. Kuehl, who had a 60-yard touchdown run in Litchfield’s 32-8 win over Milaca one week before, finished with 11 carries for 142 yards.

“They’ve learned. They’re a smart group of kids,” Jackman added. “And then you pair them with some juniors and sophomores … it’s a good group.”

Schutz played behind a pair of record-setting receivers — Bennett Lecher and Tyson Michels — last season, which limited his receiving numbers. But he has stepped into a featured role this season and handled it well, Jackman said.

“Ryan’s caught a lot of balls right now,” Jackman said. “And you’ve got Tanner Kohls, he’s another dynamic player that’s not had a lot, but he’s going to get his time. Ryan had a dozen catches last year. Tyson had those catches and Bennett had those catches. But this year we’ve got Ryan and Tanner, and Jeremy (Greer), and another good kid like Mason (Woelfel) came out. They’re all working every day in practice. That’s what we talked about — each day, you got to get a little bit better.”

Another senior member of the receiving corps, Beau Weseloh, had two catches for 24 yards. He also logged some plays under center, completing one of two passes for 13 yards after taking over for starting quarterback Logan King, who finished 14-for-20 for 195 yards.

Weseloh’s playing time at quarterback was important, Jackman said, as was the playing time afforded virtually everyone on the roster during the second half. It wasn’t always pretty in the final 24 minutes, but the game experience is part of the getting better every game.

“We gotta get better the second half, we can’t leave this game and think, gosh that just ended ugly, because there’s nothing worse – yeah, we want to win the ballgame, but there’s nothing worse than leaving the game feeling that just those last two quarters were cruddy,” Jackman said. “But it was a great time to get some other kids some reps, game-like reps, that need it. Because down the road, we’re gonna need ‘em all. And that’s what football is all about.”

Developing depth is especially important as Litchfield moves into the heart of its season, beginning Friday with a game at Glencoe-Silver Lake. The Panthers are 1-1 after a stunning 41-0 loss to Annandale in the second game of the season.

“I love playing Glencoe,” Jackman said. “Traditionally, they’re a very good football team, great coaches, great system. It’s going to be a good test for the kids. And I think that these kids want that, you know, they want the competition.

“I love those games. Those tight games are fun,” Jackman said. “It’s not fun, necessarily, losing. But those competitions, those battles that come down to the last couple plays, the last couple minutes, there’s nothing better.”

You can find more photos from Litchfield's 48-7 win Friday the Independent Review website at www.independentreview.net, under the Photo/Video tab.