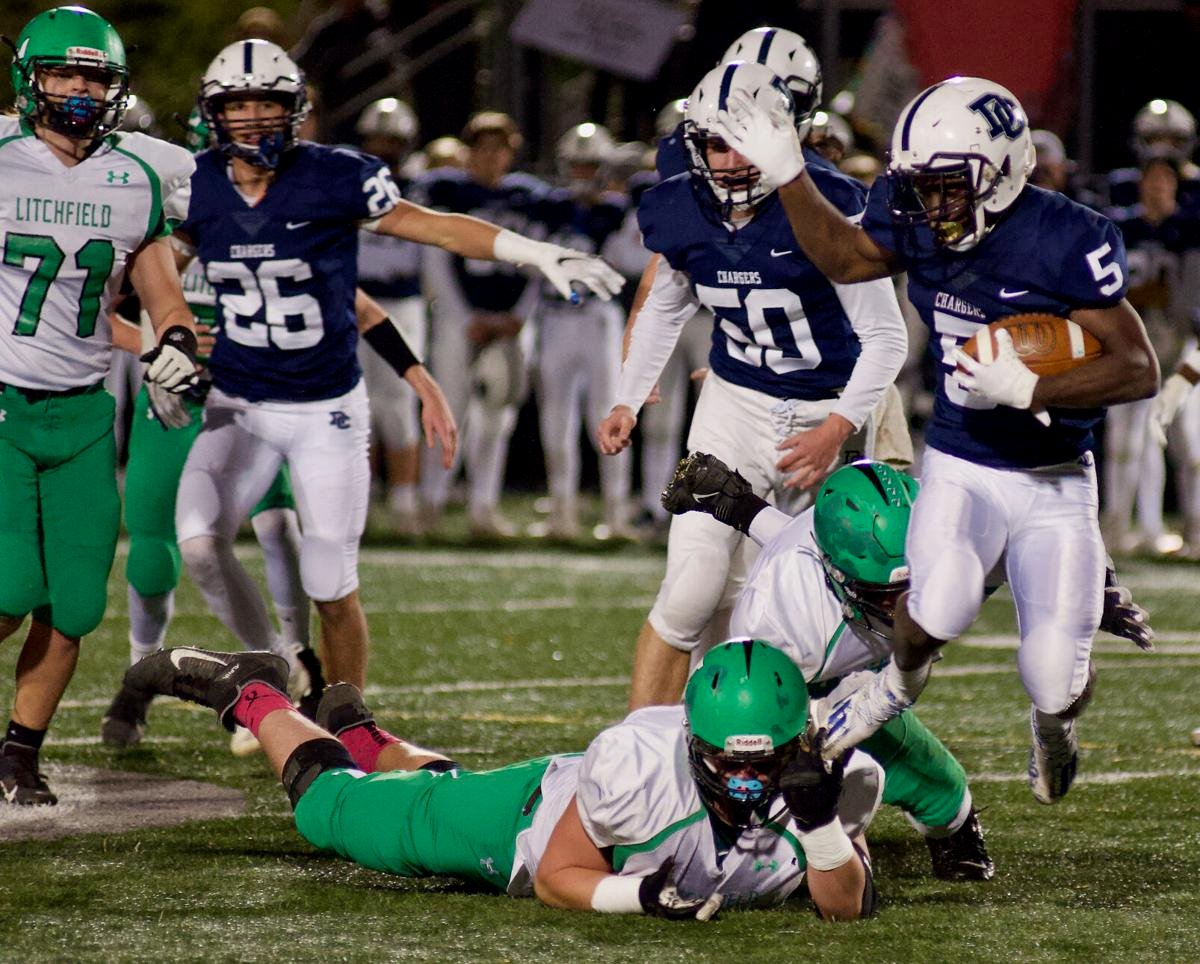 Dassel-Cokato’s Monte Gilman slips a tackle during a run in the first half. 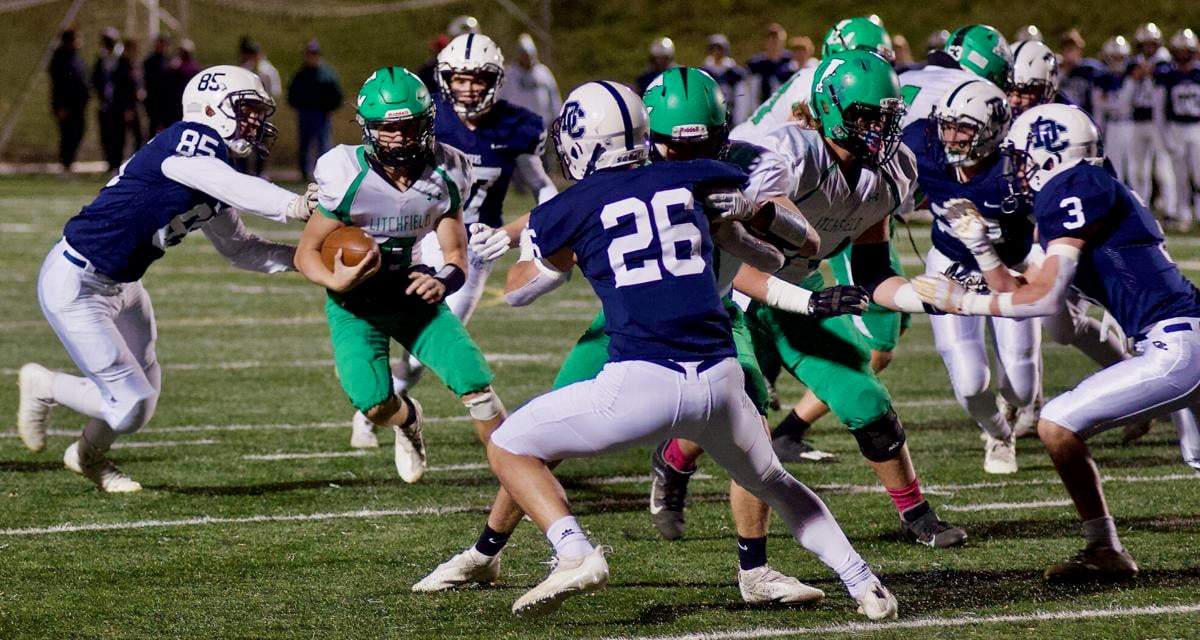 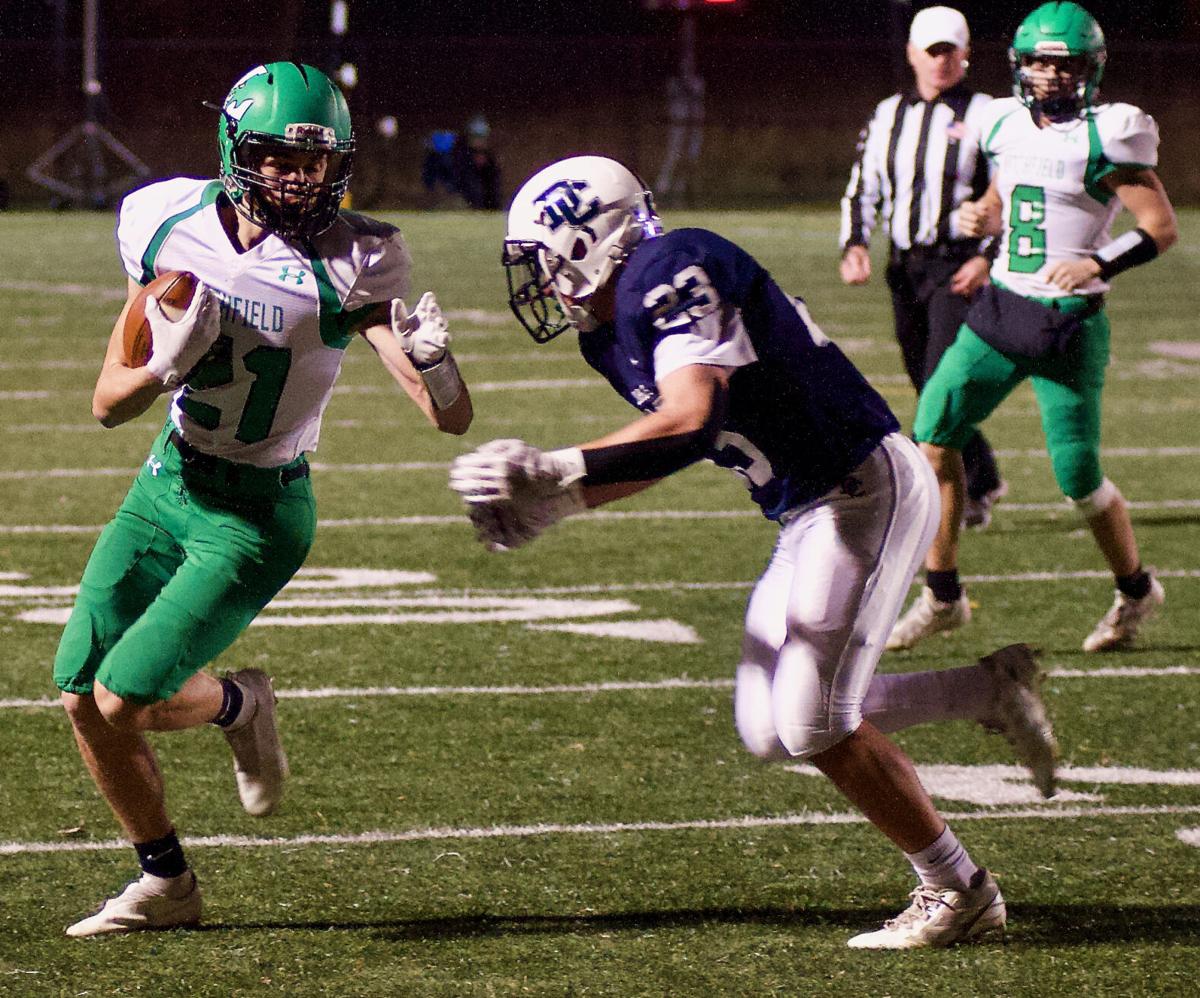 Sophomore receiver Blake Aller tries to elude a Dassel-Cokato tackler after catching a pass from Logan King in the first half. 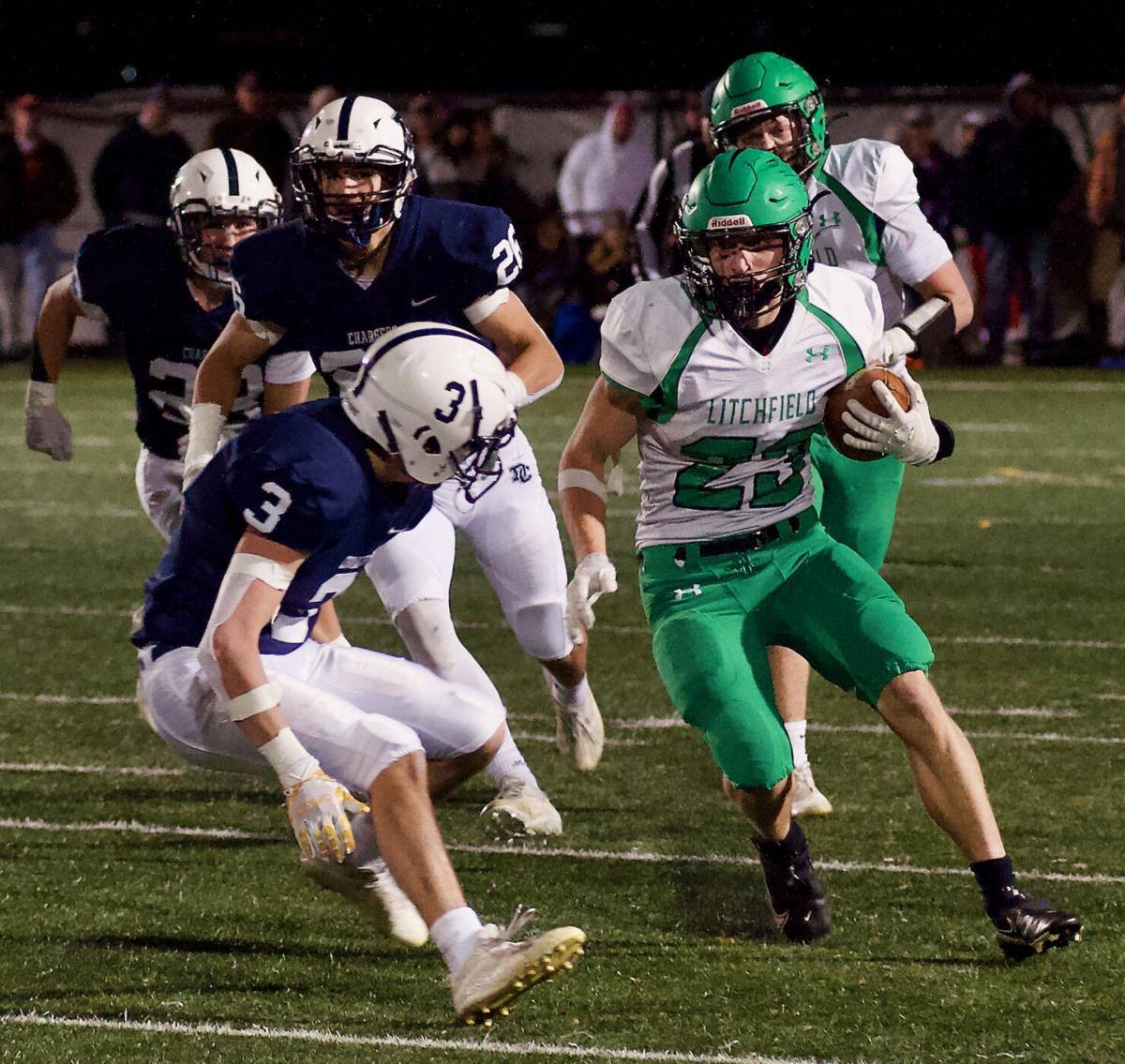 Litchfield senior Tanner Kohls heads up field on a run in the first half.

Dassel-Cokato’s Monte Gilman slips a tackle during a run in the first half.

Sophomore receiver Blake Aller tries to elude a Dassel-Cokato tackler after catching a pass from Logan King in the first half.

Litchfield senior Tanner Kohls heads up field on a run in the first half.

After two playoff upsets, the Litchfield football team ran out of magic.

And that meant the end of the season.

Dassel-Cokato scored 38 unanswered points, including 31 in the second quarter, as it rolled past the Dragons 45-10 in the Section 2AAA championship game Friday at Crown College in St. Bonifacius.

Dassel-Cokato, 11-0 overall, will play Section 3AAA champion Fairmont in the State Class AAA quarterfinals at 11 a.m. Saturday at Prior Lake.

Dassel-Cokato proved nearly unstoppable once it got going. Led by the brother running back tandem of Eli and Monte Gillman, the Chargers piled up 384 yards rushing — including nearly 300 yards on the ground in the decisive second quarter.

Senior Eli Gilman carried the ball 26 times for 189 yards and three touchdowns, while sophomore Monte had 10 carries for 120 yards and one touchdown. Eli Gilman also caught the only completed pass by Dassel-Cokato quarterback Gregory Clark (in four attempts) and turned it into a 13-yard touchdown.

“We were trying to run some different fronts to give them some different looks … because they’re just lining up and coming at you,” Jackman said. “And you know, they made some plays, and we didn’t tackle as well as we needed to in that second quarter. We were tackling up high, and their backs made some plays. They were cutting back and just kind of shucked us off a little bit.”

Coming off a 17-14 win over top-seeded Providence Academy six days earlier, Litchfield looked to still be riding an upset-minded high. Though they gave up an opening-drive touchdown to Dassel-Cokato, the Dragons responded with a long drive of their own, which ended with a 30-yard field by Garrison Jackman to draw within 7-3 halfway through the first quarter.

The Dragons then forced a Dassel-Cokato punt, which gave them possession from their own 39-yard line with 3:06 to go in the first. They moved efficiently down the field, and sophomore Lukas Kuehl’s 6-yard touchdown run, followed by Jackman’s extra point kick, gave the Dragons a 10-7 lead with 14 seconds to play in the quarter.

It would be Litchfield’s last hurrah.

Dassel-Cokato responded with a long drive of its own that concluded with Eli Gilman’s 2-yard run. Following the extra point, the Chargers led 14-10.

And with the teams having switched ends of the field with the quarter change, Litchfield would be driving into a stiff wind, which whether actual or perceived disadvantage, seemed to play a role in a significant change in momentum in the game.

But for Jackman, injuries played more of a role. Kuehl left the game in the second quarter and didn’t return. Senior linebacker/lineman Wyatt Larson and senior running back/linebacker Kole Bartlett both were in and out of the game after injuries.

“Some of our guys, our two-way players, got a little dinged up, and then all of a sudden, you’re scrambling a little bit,” Jackman said. “To be honest with you, we’re in November. I can’t complain too much about the weather. You know, there’s some wind … but the wind, that didn’t interfere with us stopping their run game.”

Litchfield failed to move the ball on its next possession, and its punt snap sailed into the endzone for a D-C safety. The Chargers took the ensuing kickoff and drove 57 yards for a score on a 19-yard run by Eli Gilman. The two-point conversion put them up 24-10.

Dassel-Cokato scored two more touchdowns before halftime to all but end the game. In fact, with the Chargers up 45-10 after they scored on their opening possession of the third quarter, the game went to running time.

It was a difficult end to a season in which the Dragons overcame the adversity of losing their last three games of the regular season after a 5-0 start. The skid dropped the Dragons to the fifth seed in Section 2AAA, which meant they’d be on the road for as long as they lasted in the playoffs.

Turns out, they lasted much longer than most might have predicted, beating fourth-seeded Rockford (13-6) and top-seeded Providence Academy (17-14) to reach the section final.

“They’ve worked their tails off,” Jackman said. “The last two weeks of practice have been fabulous. They played 11 games this year. They got beat by a very, very good team.”