Senior forward Emmy Haataja rushes up the ice with teammate Anna Holcombe on her left and a Minnesota River defender on her right. 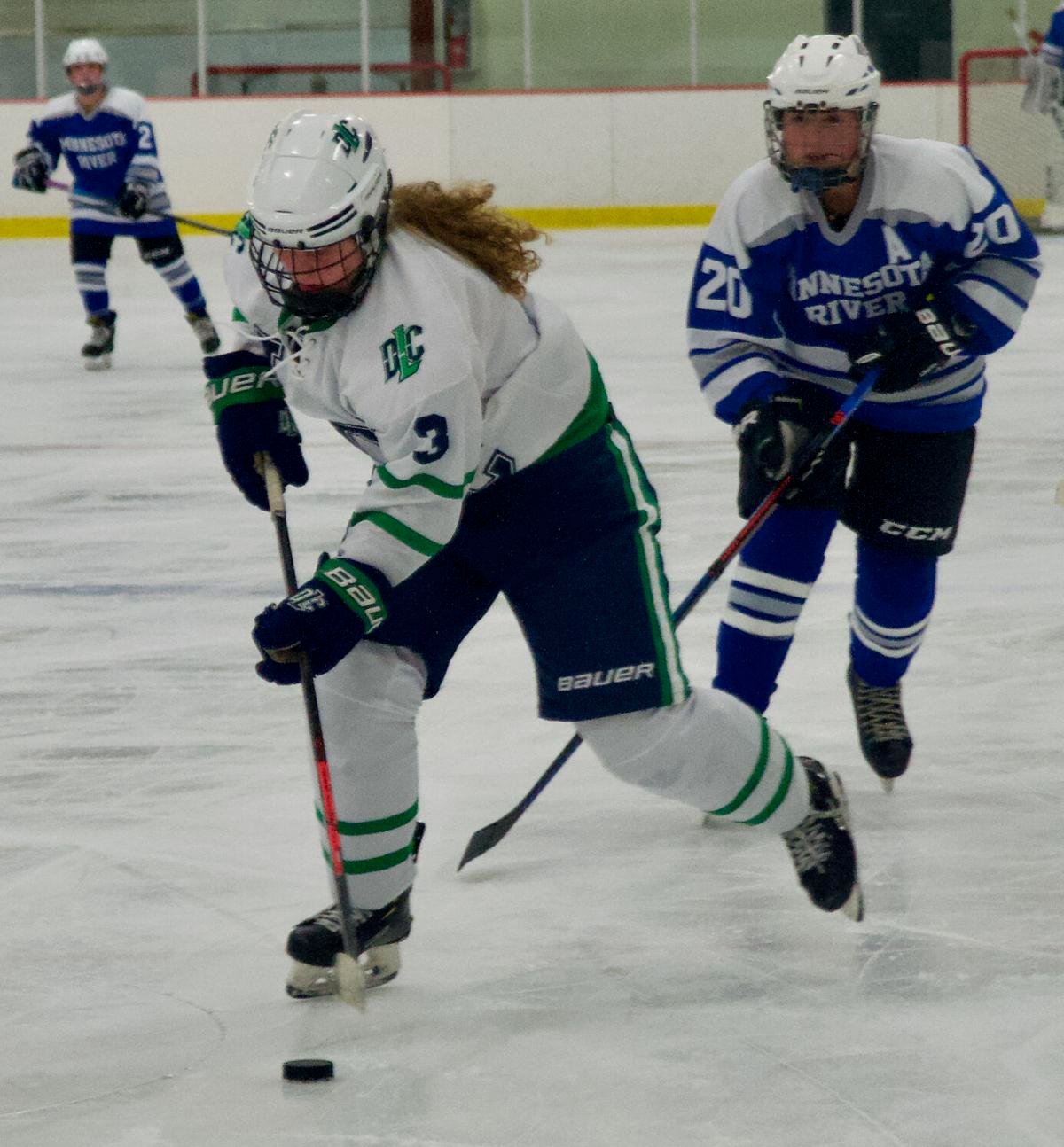 Senior defenseman Emily Johnson carries the puck up the ice during the Dragons’ season-opening 2-0 win over Minnesota River. 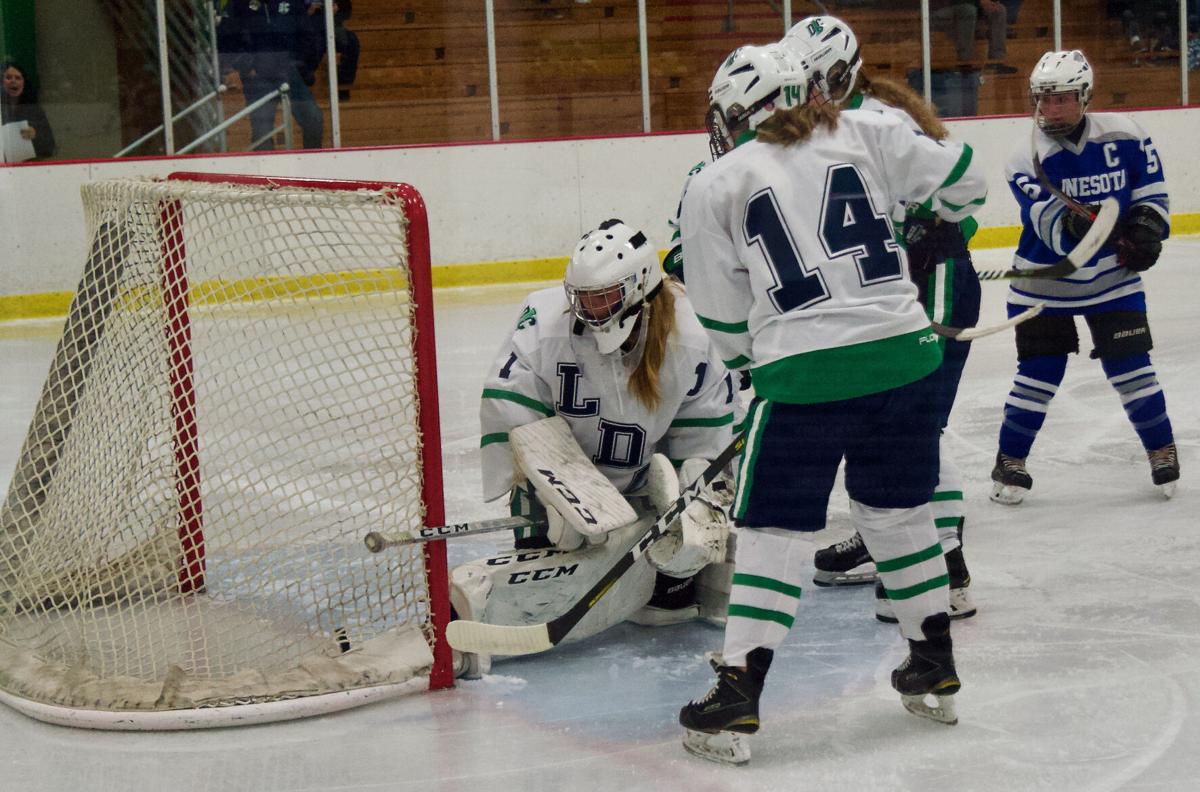 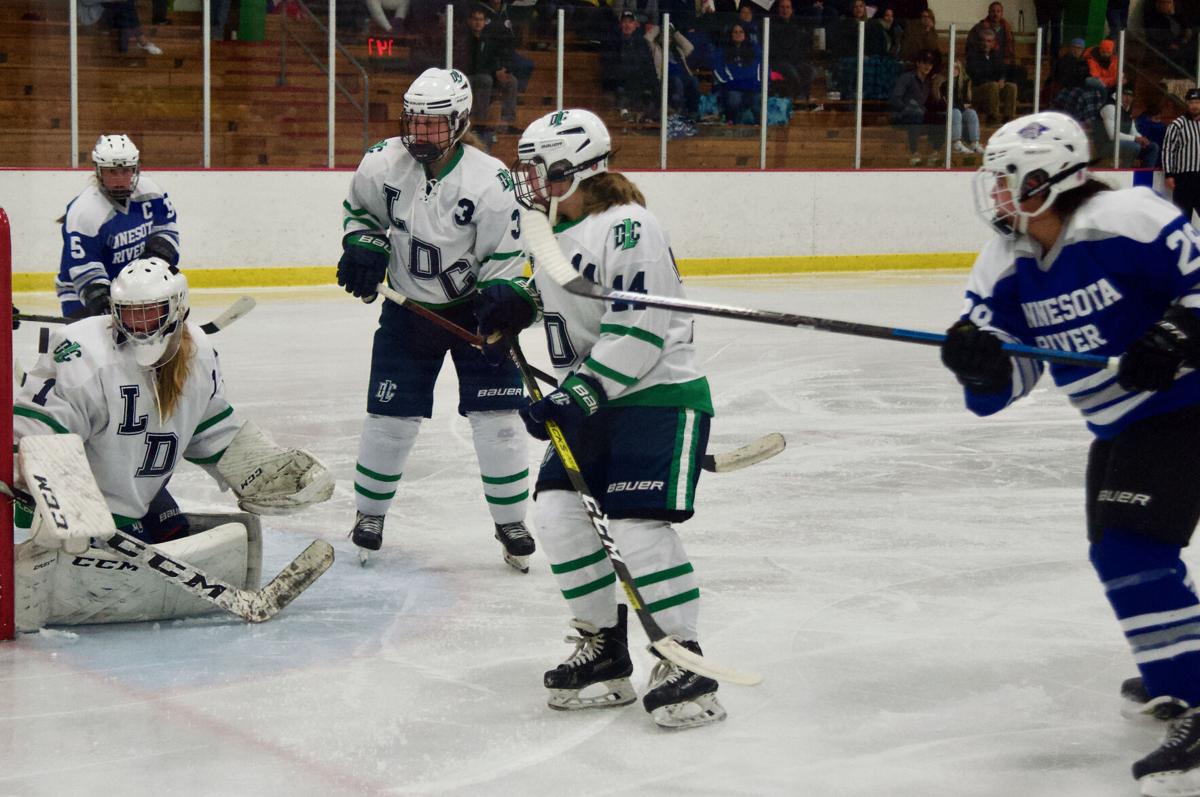 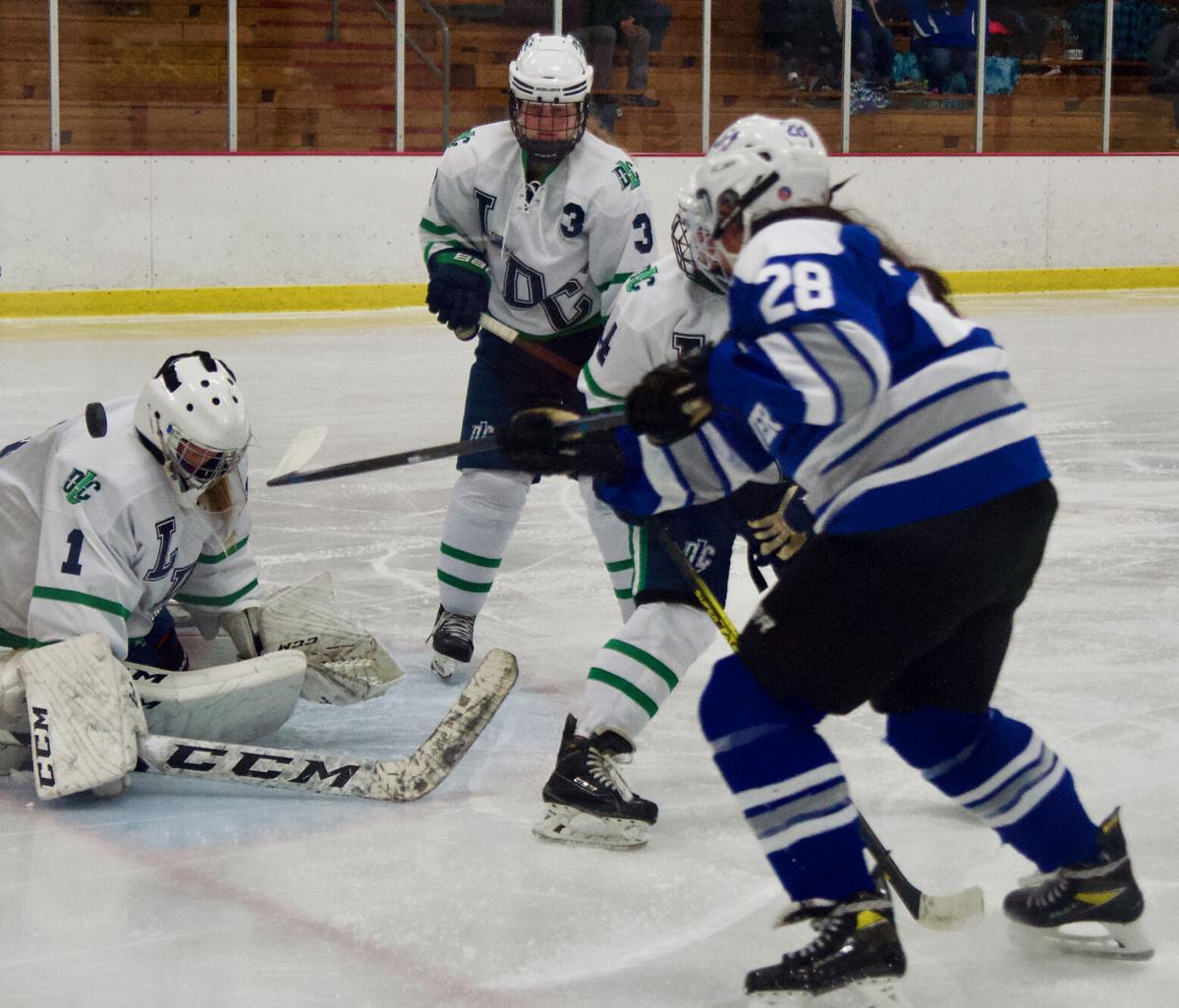 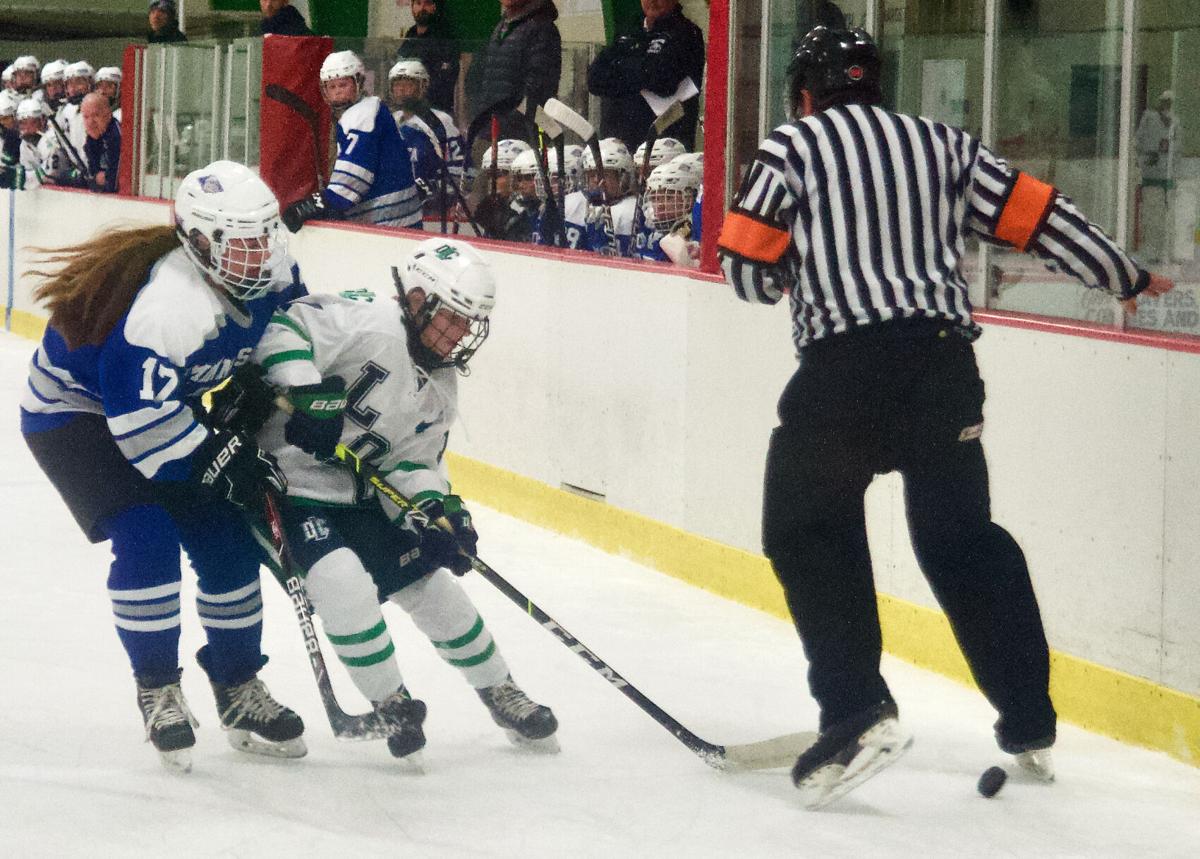 Senior forward Emmy Haataja rushes up the ice with teammate Anna Holcombe on her left and a Minnesota River defender on her right.

Senior defenseman Emily Johnson carries the puck up the ice during the Dragons’ season-opening 2-0 win over Minnesota River.

Litchfield finished last season’s COVID-truncated season with a 3-12-1 record and lost several seniors, including four-year starter Avery Stilwell, one of the top goalies in the area if not the state.

But Damerow and Hogg see potential for success in a young group of players coming up, many of whom played on LDC’s 15U B team that won the state championship in March. That group will be counted on heavily in a team that features just four seniors and four juniors.

It just might take a little time to learn the varsity game.

“They’re playing bigger kids, it’s a big jump,” Damerow said. “But you know, I think our expectations are actually pretty high, as high as they have been in the past at least.”

The Dragons are off to the kind of start that would seem to justify those expectations, opening the season with two wins — a 2-0 win over Minnesota River Nov. 11 at Litchfield Civic Arena and an 8-2 win over Princeton Nov. 16 on the road.

It’s also the kind of start that put some of the team’s veterans at ease.

“I was a little nervous at first, just because we have such a young team,” said senior defenseman Adriana Iverson, who had one of the Dragons’ goals in their season-opening win. “But I think that we really pulled together these first two games, and I think that we will continue to do that in the future.”

“I think everyone just showed up to play from the beginning,” Emmy Haataja, a senior forward said. “It’s a really competitive team with people being able to be get moved around anywhere and ready to play where they’re needed.”

Iverson, Haataja and senior defenseman Emily Johnson will serve as the Dragons’ co-captains this season. With just seven players returning from last season’s squad, the trio agreed they’re looking for a kind of “fresh start” this year.

“It’s definitely a goal to make it to sections and win a section game for sure,” said Johnson, who scored a team-leading six goals last season, along with two assists. “I think we can do that this year. We have a lot of young girls who are eager to play on varsity and have some success.”

Having seen their younger teammates in action for the first few weeks of preseason practice and a couple of games, the three captains agreed that speed and aggressiveness should be a big part of the team’s style.

Coaches Damerow and Hogg agreed with that assessment.

“I think a goal of ours is to be more offensive,” Hogg said. “I think the past few years, that’s something we struggle with at times is to score goals. And it’s really hard to win if you’re not scoring. It can be kind of frustrating, too.

“I think we’ve got some of the younger girls we’re trying to help them learn ways to be more offensive and to score goals against high school opponents and high school goalies,” Hogg continued. “It’s going to take some time, obviously, but we’re going to try to be a little more offensive (and) still take care of our defensive end.”

Having experienced players like Iverson and Johnson on the defensive end will help in that regard as the Dragons move into a new goalie era, one without Stilwell.

“She’s going to be tough to replace, no matter what,” Damerow said of Stilwell, who registered a .908 save percentage and 4.09 goals-against average last season. “But we have two freshmen, both of them have played a lot of hockey.”

Kira Kuechle and Janelle Quast will compete for time in net this season, with coaches deciding on an alternating starter for at least the first few games. It’s hoped the rotation will expose both freshmen to varsity level action and allow them to grow their abilities.

“(Stilwell) made our decision-making very easy,” Hogg said. “It’s a different feel for us as coaches, giving two girls a chance, and it’s nice in practice to have them battle it out every day and push each other to get better and earn that ice time every other game.

“Hopefully they’re thinking about it as, ‘I want to be better the next game,” and ‘I’m trying to just be the best I can be individually’ and pushing themselves,” Hogg added.

So far, so good. Kuechle, who was the goalie on the 15U state championship team, started the season-opener against Minnesota River and recorded 38 saves in a shutout win. Five nights later, it was Quast in goal leading LDC to the 8-2 win.

The Dragons traveled north for a pair of weekend games, Friday against North Shore and Saturday at Moose Lake – teams that Damerow expected to give LDC more of a test. As important as game results during the trip, though, would be the continued development of the team.

“Like Brett has said before, we’re just trying to focus on us getting better every day,” Hogg said. “And I think if we do that, everything else will take care of itself. Especially the young group of girls, I know they have big goals and dreams, but there’s some steps along the way that you have to take to get there.”