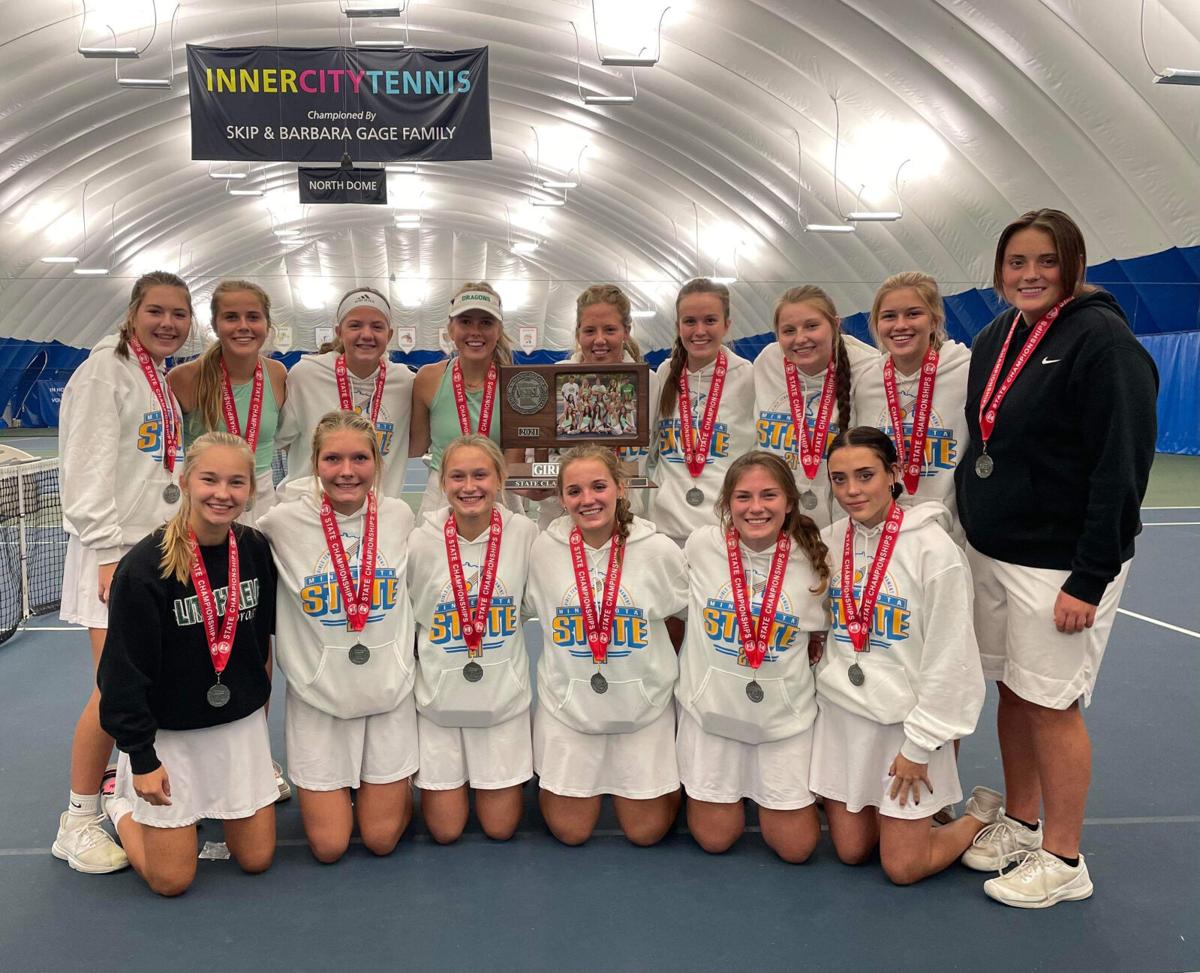 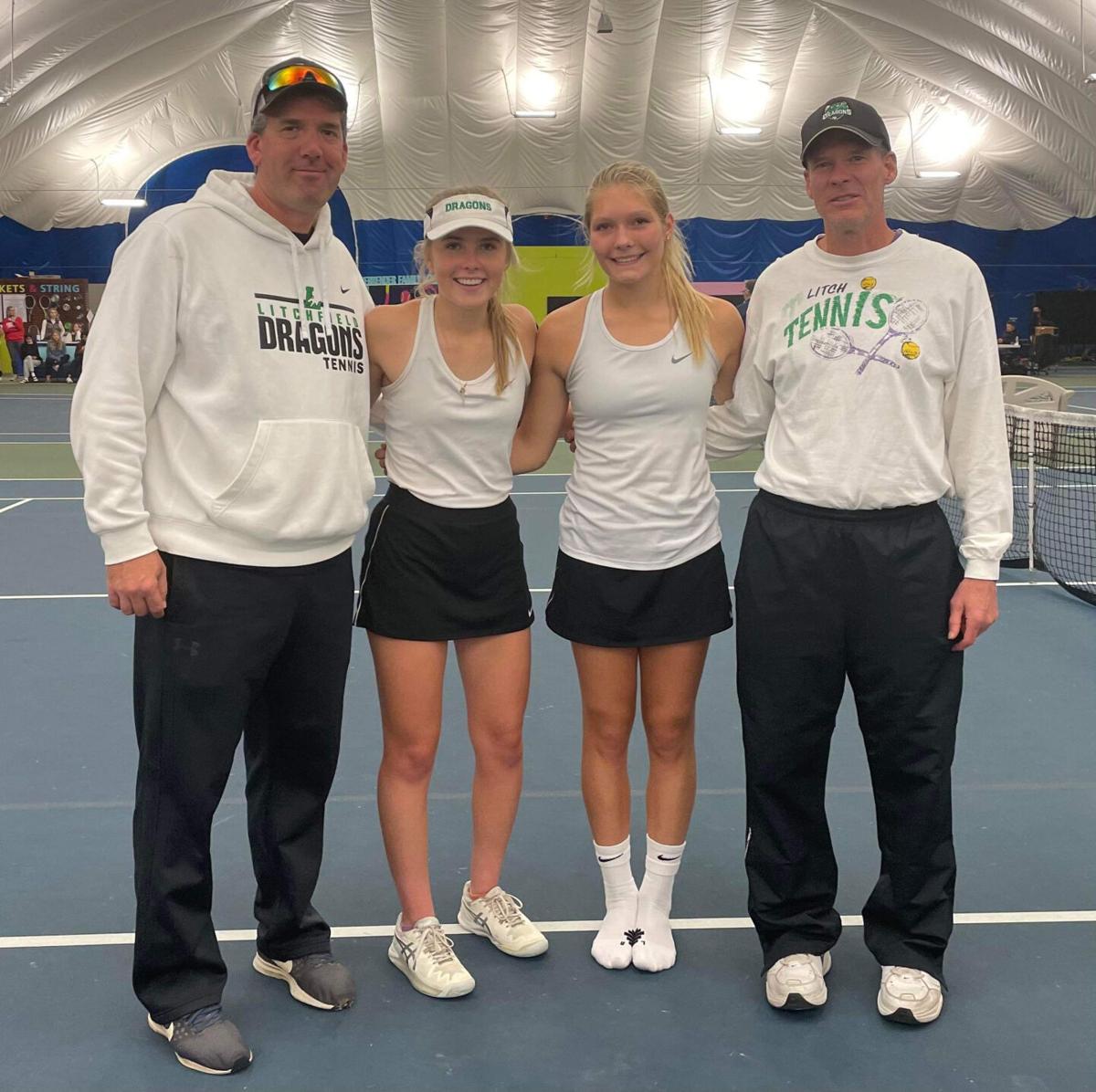 When it comes to postseason success, the Litchfield girls tennis program has seen plenty.

What the Dragons did last week at the Class A State Tournament should rank among some of the program’s best memories, as they claimed second place in the team competition then saw their doubles team of Britney Prahl and Kylie Michels earn third place in individual tourney.

“It was pretty amazing, an amazing week,” Litchfield coach Matt Draeger said. “It was rewarding to see our kids compete at that level.”

Litchfield posted wins over Pine City (4-3) and Providence Academy (6-1) before falling to Breck 7-0 in the championship match.

For Draeger, the Pine City match was memorable as “one of the hardest-fought tennis matches I’ve ever been a part of. Two really good teams, exchanging blows the whole time. Big points, big moments.”

Freshman Karlee Prahl got the Dragons’ first point in the match with a win at No. 3 singles, and seventh-grader Isla Dille locked up the victory with the fourth point at No. 4 singles. It was an illustration of Litchfield’s depth and its youth, as the team, which features just two seniors, dropped its top two singles matches and its top doubles match but still won.

As Litchfield advanced to the championship match against private school power and the state’s No. 1-ranked Class A team, Draeger said he felt optimistic.

“Our whole mentality was to keep it close,” he said of the matchup with Breck. “We felt we could keep the match close and figure out a way to win it at the end.”

That didn’t happen, but Draeger said he was impressed with the way his players contested every shot, pushed every point.

“I give Breck all the credit in the world. I thought they stepped their game up when they had to,” Draeger said. “And our kids fought them and battled them right to the end.”

That scrappy attitude continued in the individual tournament, where junior Ryanna Steinhaus battled through a three-set match to beat Wadena-Deer Creek’s Madison Packer 6-2, 0-6, 6-4 in the first round.

Steinhaus’ state tournament experience ended as she fell to Isabelle Einess of Minnehaha Academy in the quarterfinals 6-0, 6-0, but Draeger said his No. 1 singles player’s performance offered a great illustration of the kind of never-give-up attitude the entire Litchfield team exhibited this season.

“(Steinhaus) was pretty exhausted – mentally, physically, emotionally, the works,” after playing three matches at the top singles spot in the team tournament, Draeger said. “She had to play this girl from Wadena, who hadn’t played yet (in the state tournament), who kept the ball in play … made points really long. Ryanna won the first set, and I asked her, ‘How are you feeling?’ She said, ‘I can hardly feel my legs.’”

Steinhaus didn’t win a game in the second set, but still prevailed, winning the third set and closing out the two-hour match.

“I thought the whole thing emulated our team,” Draeger said. “That type of fight and competitiveness, that’s the type of kids that we have. That was a pretty remarkable sequence there.”

Capping the Dragons’ state tournament effort was the performance of Michels, a junior, and Prahl, a senior, in the doubles tournament.

The duo played together last season, but diverged this year when Michels moved to fill an opening at No. 2 singles for the regular season. They reunited for doubles competition in the postseason and their cohesiveness was still there. They advanced through the first two rounds of the state tournament with straight-sets wins before falling to the Breck duo of Ellie Pirtle and Petra Lyon in the semifinals 6-0, 7-5.

That put them into the third-place match against another Breck duo, Aditi Nadkarni and Witt Mehbod. And the Litchfield pair played what Draeger said was a complete match in a 6-1, 6-0 win.

“They played about as good a doubles match as I’ve seen in a long, long time,” Draeger said. “It was never a doubt. To take third after all they went through that way, it was an incredible feat. It was a great way for us to end, just playing at that level. It was a great way for Britney to end her career, and Kylie’s got a lot to look forward to.”