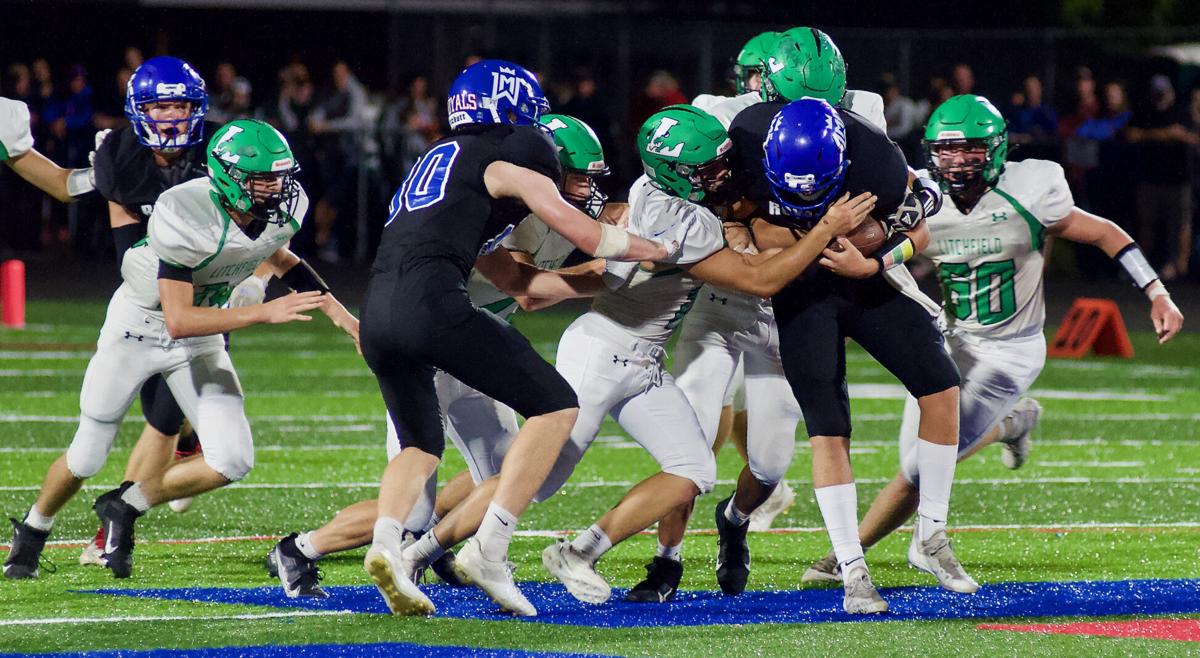 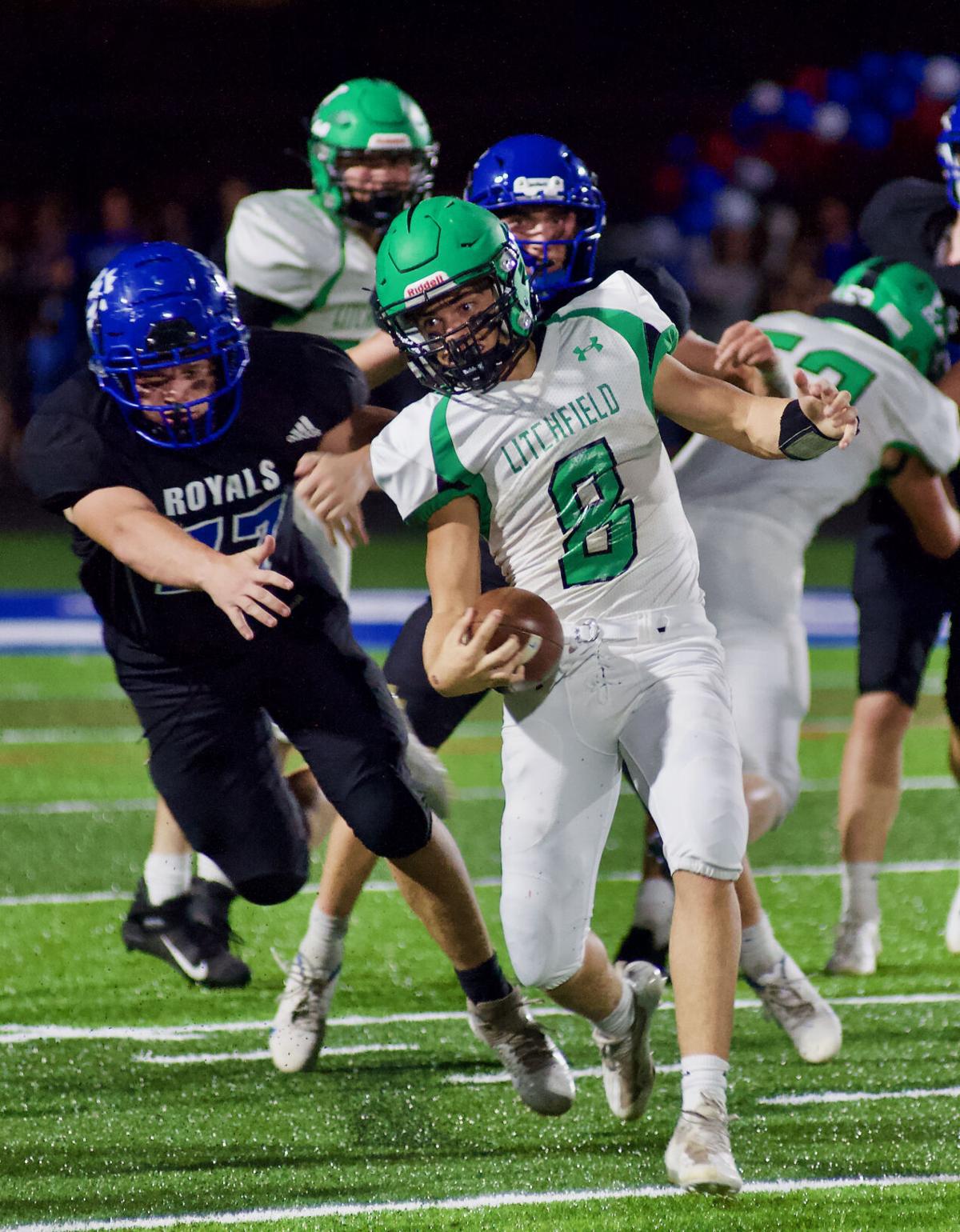 Quarterback Logan King heads up field on a 74-yard touchdown run in the second quarter against Watertown-Mayer Friday. 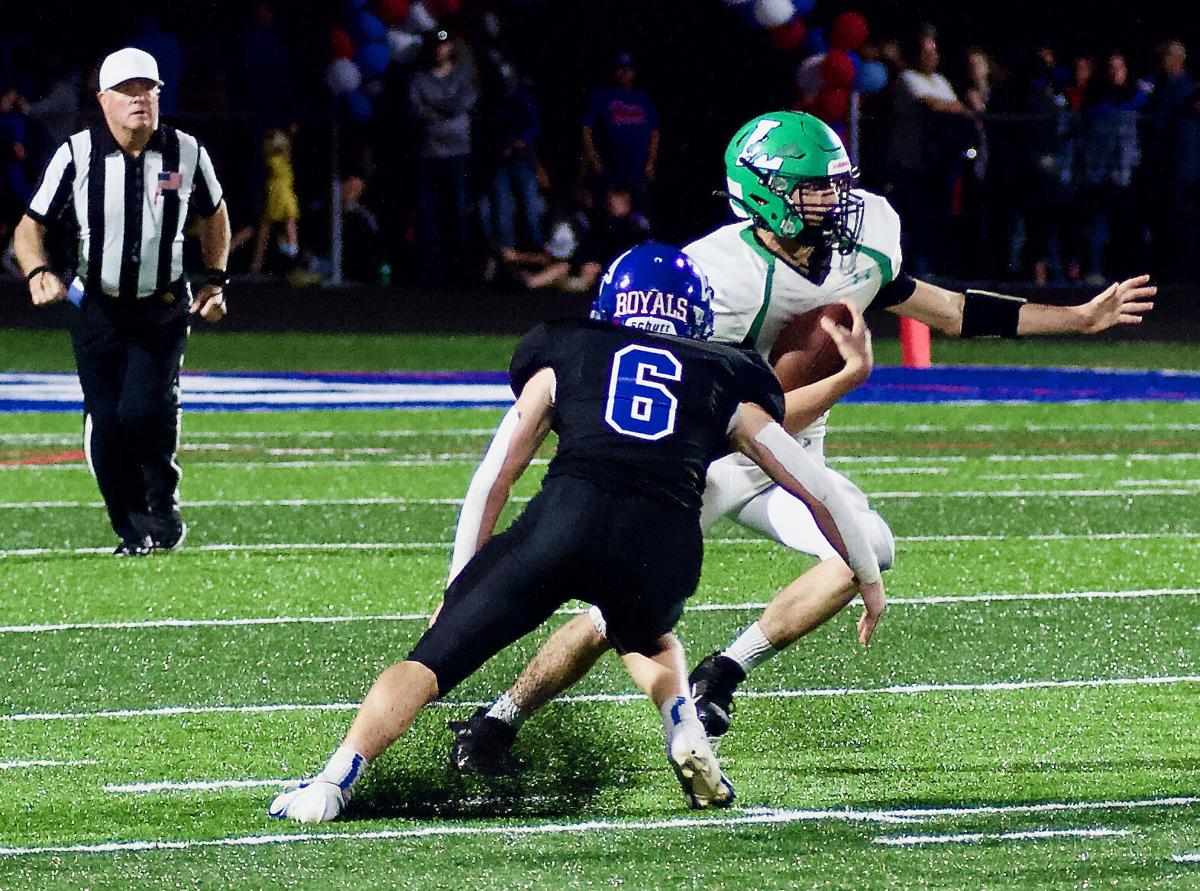 Lukas Kuehl kicks up "dust" as he cuts away from Watertown-Mayer linebacker Wyatt McCabe during a third-quarter run. Kuehl finished with 104 yards rushing. 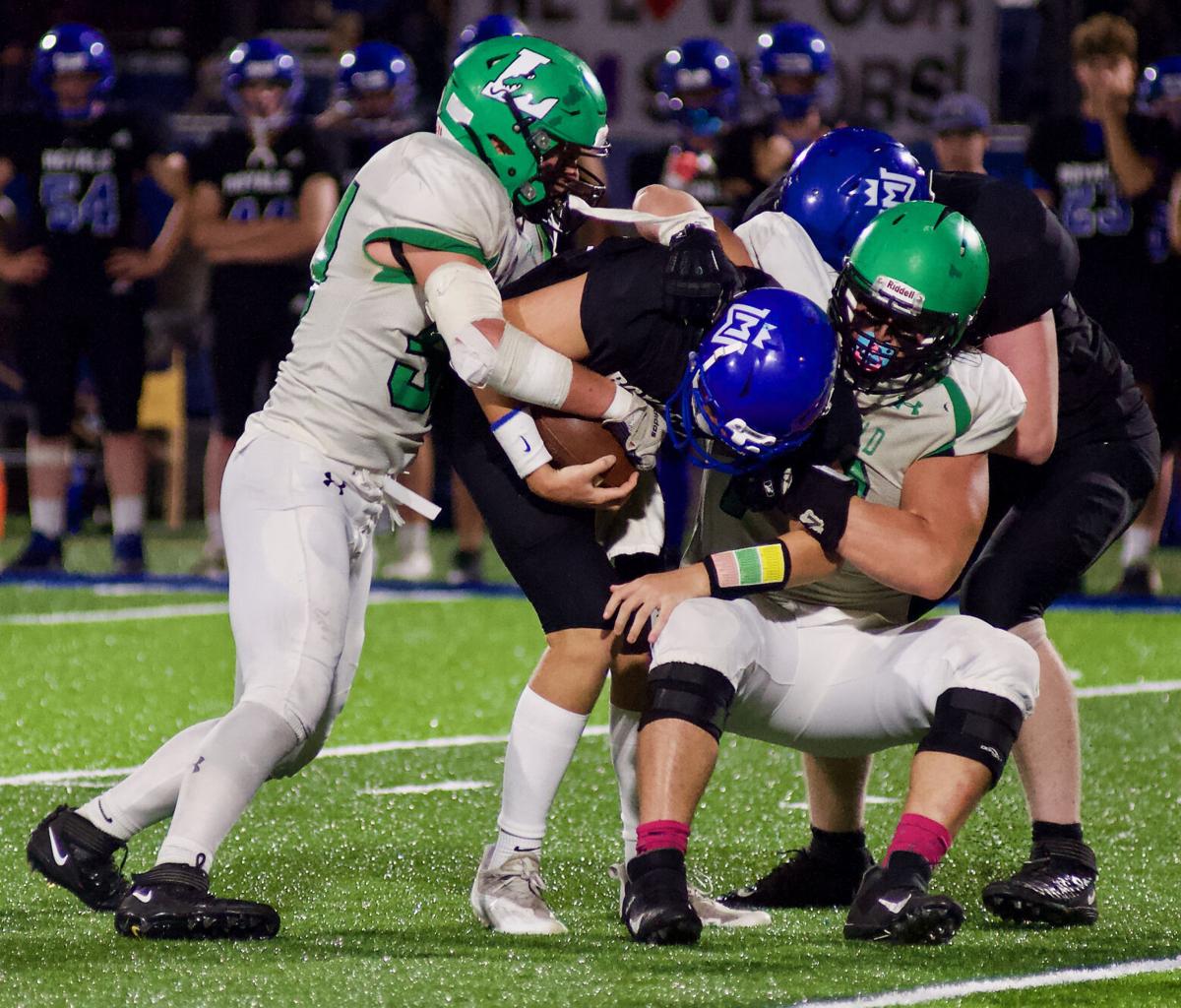 Logan King leaves Watertown-Mayer defenders, and his own linemen, behind on his way to a 74-yard touchdown run.

Quarterback Logan King heads up field on a 74-yard touchdown run in the second quarter against Watertown-Mayer Friday.

Lukas Kuehl kicks up "dust" as he cuts away from Watertown-Mayer linebacker Wyatt McCabe during a third-quarter run. Kuehl finished with 104 yards rushing.

Logan King leaves Watertown-Mayer defenders, and his own linemen, behind on his way to a 74-yard touchdown run.

It took 12 seconds for Watertown-Mayer to change the trajectory of the Litchfield football season Friday night.

The Dragons, undefeated and ranked third in the state in Class AAA, had not trailed in any of their first five games of the season.

That changed when Watertown-Mayer’s Keagan Brassington returned the opening kickoff 73 yards for a touchdown — a score that sparked a 26-7 win over Litchfield before a large and raucous homecoming crowd at the Royals’ new field.

“The loudness … I think threw us for a little bit of a loop, you know,” Jackman added. “They got the new speakers up and all that and it kind of interfered with some of the communication stuff. Not to make excuses. Watertown played outstanding.”

Statistically, not much separated the two teams. They both had 199 rushing yards. Watertown-Mayer managed 110 passing yards to Litchfield’s 37.

But the real difference was in the kicking game – where Watertown-Mayer junior Ashton Hecksel booted four field goals, two extra points and forced the Dragons to start most of their possessions deep in their own end of the field with four kickoffs into the endzone for touchbacks.

“They’ve got a tremendous kicker, tremendous kicking game,” Jackman said. “Each time you’re starting at your 20 or inside that 20, it’s a challenge in trying to get a first down, so then you’re putting from your own 15, and they got the field position.”

Litchfield did, indeed, start inside the 20 on its first two possession and was forced to punt both times.

And though the Royals couldn’t convert those punts into touchdowns, Watertown-Mayer expanded its lead thanks to Hecksel’s kicking. He booted a pair of 20-yard field goals to push the lead to 13-0.

Litchfield drew closer on Logan King’s 74-yard run with 11:27 to play in the first half. But Watertown-Mayer responded with another Hecksel field goal, this one from 22 yards out, then got a 26-yard scoring pass from Tanner Burmeister to Connor Donovan with 1:29 to go in the first half to take a 23-7 lead into the break.

The Dragons fumbled the ball away three times in the game, but Jackman said beyond the problems went turnovers.

“They’re just very physical up front,” Jackman said, singling out linebacker Wyatt McCabe for making several big plays. “They just play good fundamental football. Logan had that big run in the first quarter (and) we had a couple spurts there late in the second quarter, but we just struggled punting some plays together, and anytime you have one good play and then one bad play … the next thing you know you’re third and long again. We were kind of in that situation quite a bit tonight.”

And that puts Litchfield in a challenging situation for the final two games of the regular season. The Dragons play unbeaten Dassel-Cokato Friday in a game that takes on big playoff implications.

Dassel-Cokato and Providence Academy are 6-0 and atop the Section 2AAA standings. At 5-1, Litchfield is tied with Rockford. Watertown-Mayer, meanwhile, is close behind at 4-2.

The Dragons might need wins in their final two games to ensure a home game in the first round of the playoffs.

“Like I said to the kids, in life sometimes you’re gonna get kicked in the teeth, and tonight we got kicked in the teeth,” he said. “We’ve got a lot of football left. We’ll see Watertown again, probably, down the road, I would guess. We’ve got to play better and hopefully we get our chance to go back at them again.”