You are the owner of this article.
Edit Article Add New Article
You have permission to edit this article.
Edit
Home
News
Sports
Business
Lifestyle
Photo/Video
Jobs
Classifieds
In-Paper Ads
Customer Service
1 of 5 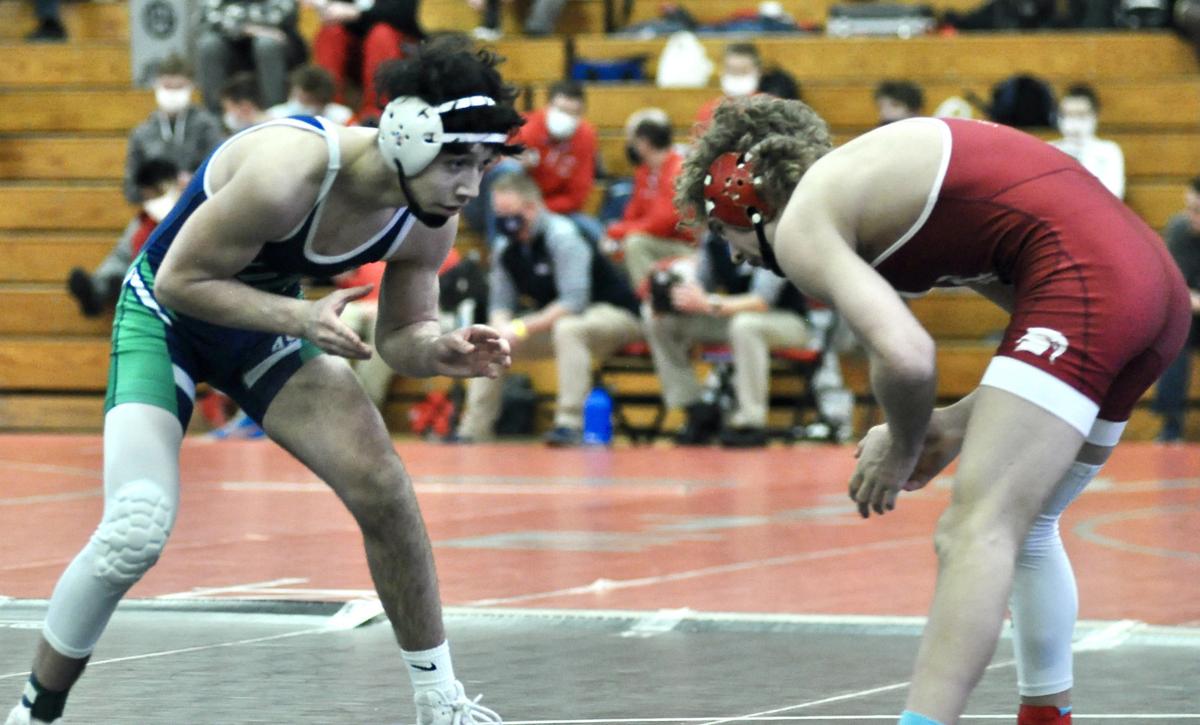 Eddie Simes looks for an opening against Rocori’s Austin Moscho in the 152-pound title match of the Section 5AA-6AA meet Saturday. 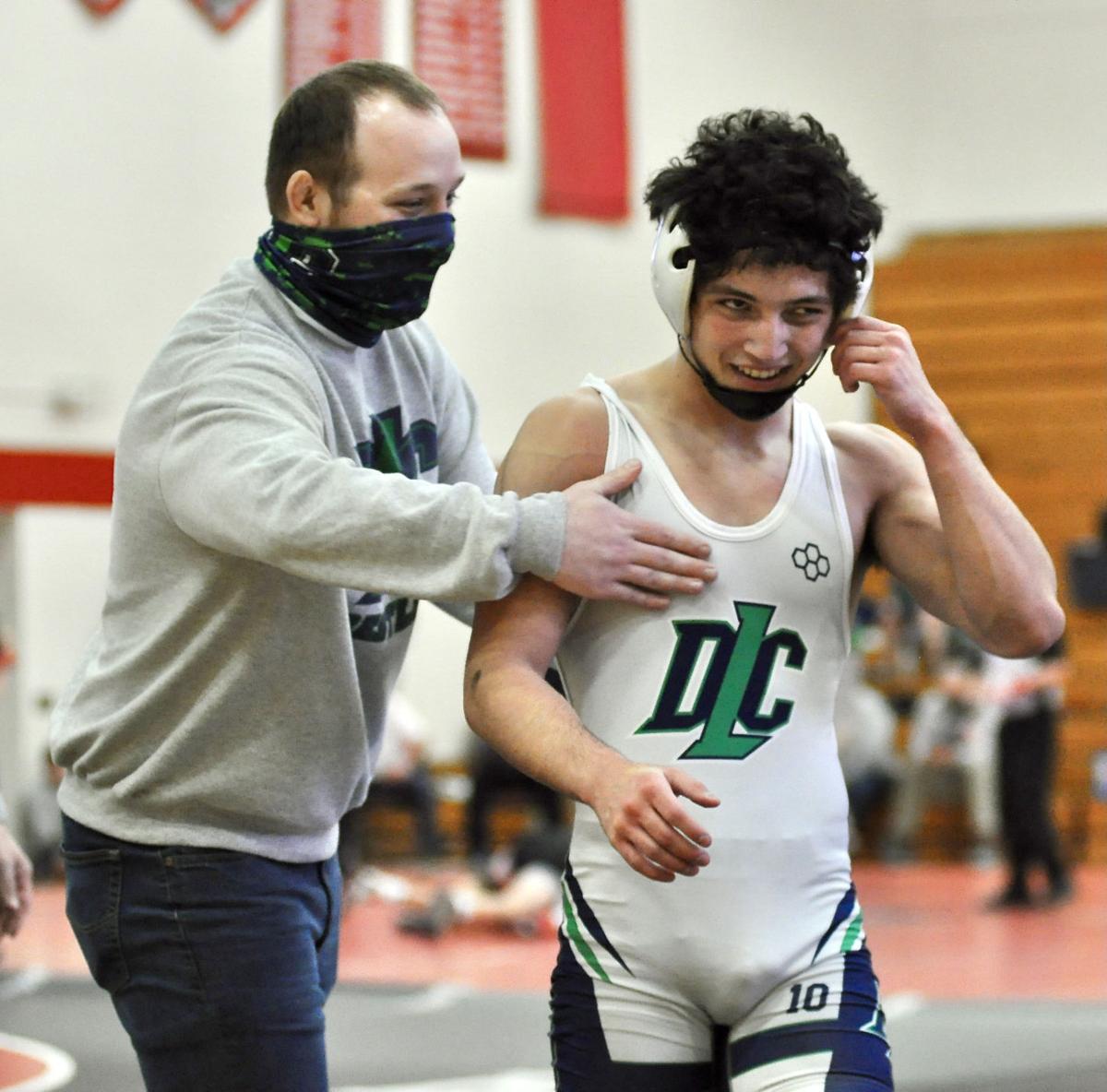 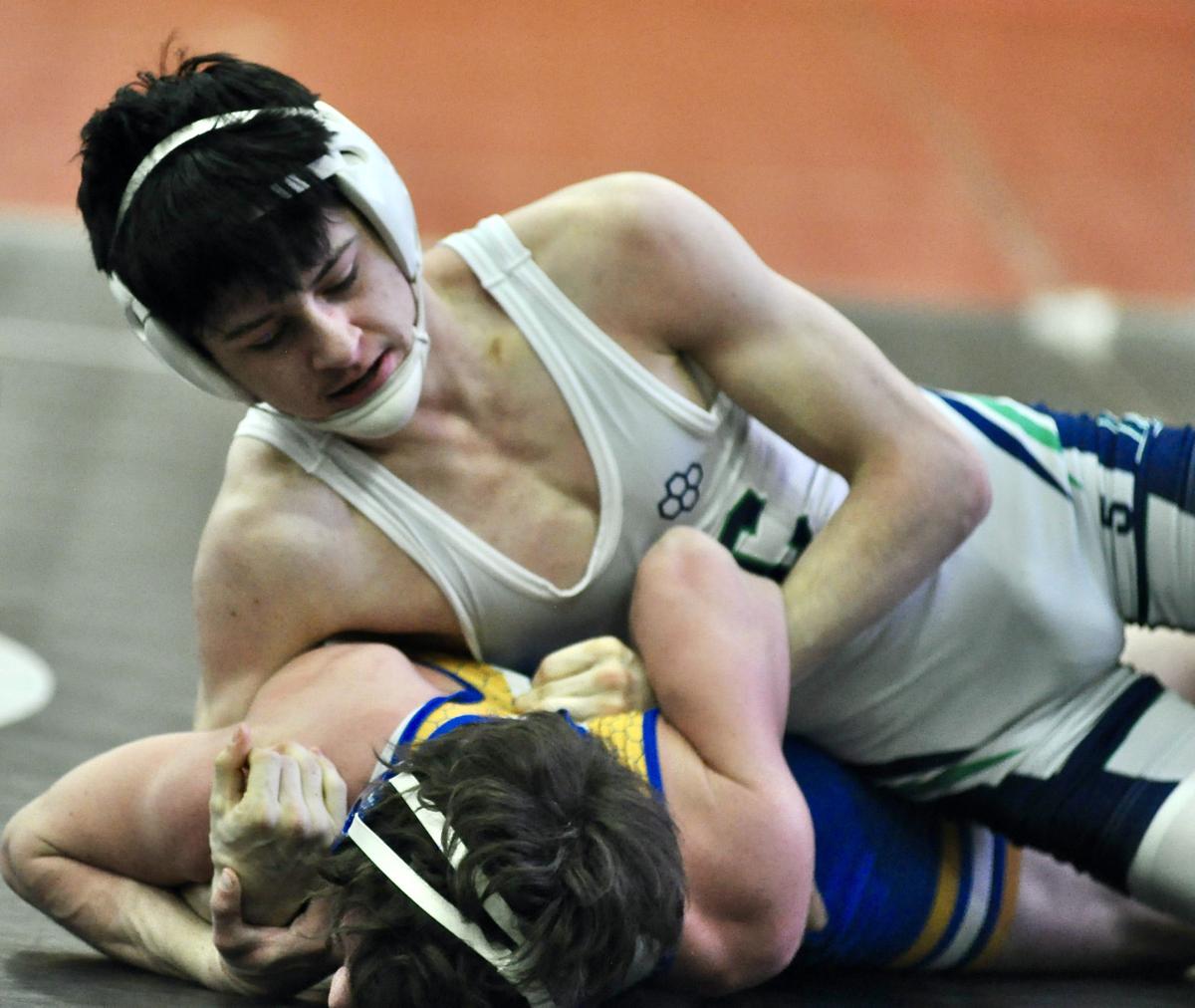 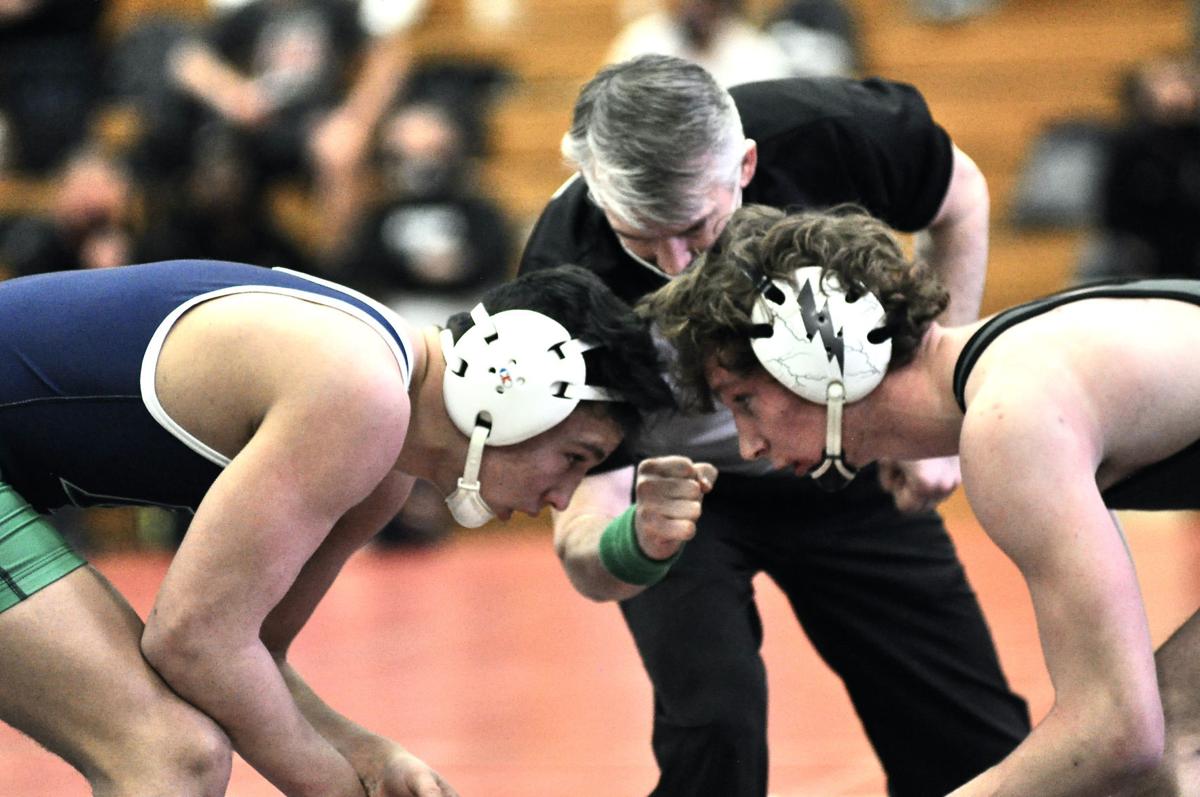 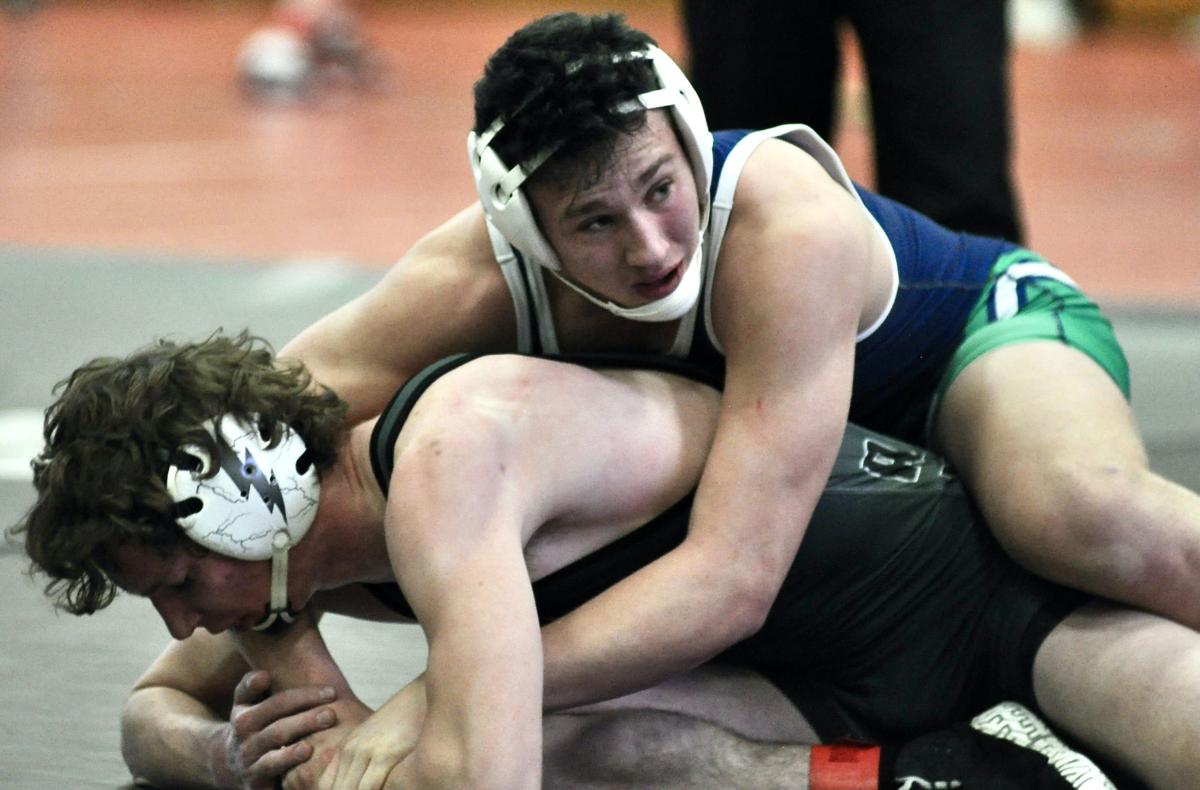 Eddie Simes looks for an opening against Rocori’s Austin Moscho in the 152-pound title match of the Section 5AA-6AA meet Saturday.

Eddie Simes knew time was running out. He needed to make a move or it might be made on him.

And that’s no way to get back to the state wrestling tournament.

So, with less than 10 seconds remaining in the 152-pound finals, Simes shot in, adjusted to a counter-move by Austin Moscho of Rocori and pulled in a takedown that lifted him to a 4-2 win Saturday at Mound-Westonka High School.

“I feel pretty good,” Simes said of earning another trip to the State Class AA Wrestling meet, which will take place Thursday through Saturday at St. Michael-Albertville High School. “It’s nice to get back there.”

Simes, 32-4, qualified for his third consecutive individual state meet on a good day for the Dassel-Cokato/Litchfield team, which already qualified for the state team tournament last week.

This year’s postseason has been a bit different, and will continue to be, due to COVID-19. In an effort to control crowd sizes for section and state competitions, the Minnesota State High School League combined sections for both team and individual “super section” events. That meant Dassel-Cokato/Litchfield wrestlers competed in section qualifying rounds March 17 to earn the right to advance to the super section event, combining the best wrestlers from Section 5AA and 6AA to determine two wrestlers who would advance to state.

Dassel-Cokato/Litchfield advanced wrestlers in 12 of 14 weight classes to Saturday’s competition, with four of them just missing advancing to state. Alex Joedeman fell 5-2 in a true-second match at 120 pounds. Gabe Nelson (126) and Will O’Brien (182) also fell in true-second matches.

“I’m grateful for what we do have, because the alternative is nothing,” DC/L co-coach Dan Buker said heading into Saturday’s individual competition. “At the same time, you’d like to have these guys experience a trip down to the Xcel Energy Center. You take the good with the bad and make the most of your memories here. We focus on the positive side.”

For Eddie Simes part of that positive side was finding a way past Rocori’s Moscho in the 152-pound finals. The two met three days prior, in the Section prelims, where Simes beat Moscho 4-1 to earn a top seed in Saturday’s bracket. So Simes wasn’t surprised to see Moscho again in the finals.

And with the match tied 2-2 deep into the third period, Simes wanted to be the aggressor.

Simes has lost in the first round in both his previous state meet appearances, but he has set a much higher goal for himself this season.

A different kind of state meet on tap

Dassel-Cokato/Litchfield wrestling fans will have plenty to follow this week as the team competes in the Class AA State Tournament.

This year’s state tournament will be different than previous years in both schedule and location. Rather than spread over three days, competition for each of the three classes will be held on one day, and all three classes will compete at St. Michael-Albertville High School.

Dassel-Cokato/Litchfield competes in the Class AA meet, which will run all day Friday, beginning with the team tournament at 9 a.m., followed by individual competition at 2 p.m.

Four teams remain in the team competition in each class, with what normally is the state quarterfinals happening in so-called “super section” or state preliminary meets a week ago.

“We’re excited for the opportunity,” Dassel-Cokato/Litchfield co-coach Dan Buker said. “In a year like this, they have adjusted very well to the restrictions that have been placed before us. There’s just an overall sense of being proud of the kids.”

Dassel-Cokato/Litchfield was seeded third for the Class AA meet and will face second-seeded Fairmont/Martin County West in the semifinals at 9 a.m. Friday. Simley is the top seed and will meet fourth-seeded Princeton in the other semifinal. Winners of the two semifinals will meet for the state championship shortly after conclusion of the semifinals.

DC/L beat Becker for what would normally have been the Section 6AA title, then beat Section 5AA champion Totino-Grace in the state prelim match March 13.

“I think the big one we knew was winning that first round against Becker,” Buker said. “We knew the matchups would be tight, especially down low. It’s a credit to our guys for wrestling well, wrestling a full six minutes, and finding a way to prevail in some of those tough matches.

“We wrestled a very challenging schedule that tested our kids,” Buker said. “Even some of our best guys have a few losses. But it has helped us prepare.”

Tickets to the state meet, priced at $12, will be issued by the Minnesota High School League through participating school. Activities directors of participating teams will share information about ordering a limited number of tickets prior to the state tournament with participants’ families.

State meet competition also will be streamed live at https://prepspotlight.tv/MSHSL/EventPackage for $9.99 for one class and $19.99 for all classes.