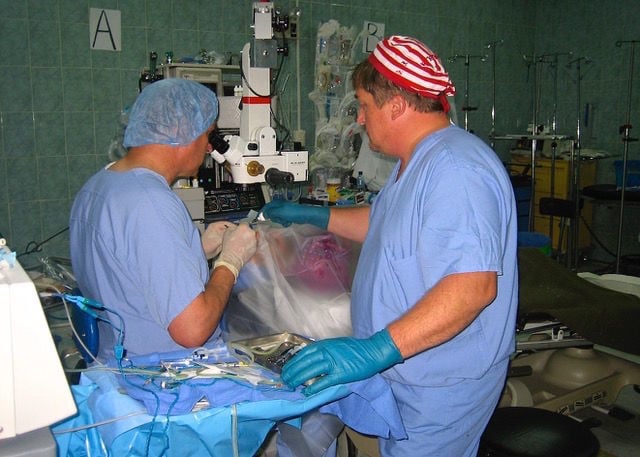 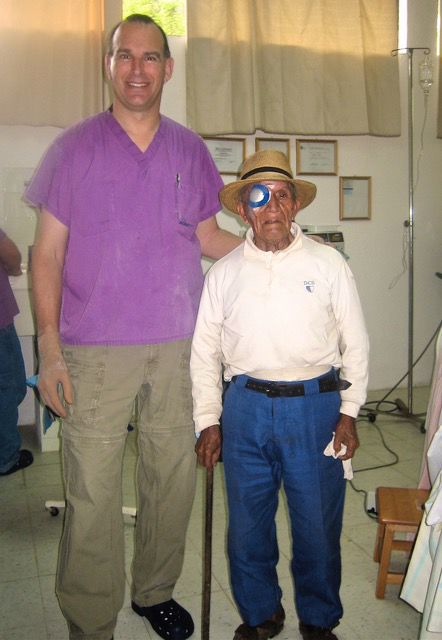 When someone asks where you plan on traveling this year, odds are good Guatemala is not on the itinerary. But for nearly three decades, that’s exactly what two area doctors have been doing, using their skills and vacation time to help restore vision to people in need.

Dr. Christopher Wallyn and Dr. Michael Merck are ophthalmologists at Regional Eye Center in Hutchinson. They met while in training together at Rush-Presbyterian-St. Luke’s Medical Center in Chicago. Both were married with young families, and both were Catholic, so pairing them as residents was a natural fit.

“Our faith really, they could tell, motivated much of how we looked at our lives,” Wallyn said.

It was also the doctors’ faith that led them to accept an offer that would change their lives. In the early 1990s, the Rev. Greg Schaffer, a priest for the Diocese of New Ulm, invited Wallyn and Merck to visit Guatemala, where Schaffer had worked at the mission parish in San Lucas Toliman since 1963.

Parishioners from throughout the New Ulm Diocese — including Church of St. Philip in Litchfield, St. John’s in Darwin, St. Gertrude’s in Forest City and Our Lady in Manannah — have traveled to the San Lucas Toliman mission through the years to volunteer to assist the people who live there.

“He invited us to come and see because both of us had said that we would like to do mission work,” Wallyn said of Schaffer. “That was one of our goals.”

“It was the personal invitation of the late Father Greg Schaffer that led to my commitment to begin the work of bringing surgical eye care to the area,” Merck said about the two doctors’ first trip to Guatemala. “He so generously offered to host me and my family. And he extended the kind of hospitality that made it impossible for us to refuse to make that initial trip.”

On their first visit, Wallyn and Merck quickly realized how difficult the living situation was for the people of Guatemala. Most families lived in one-room homes with dirt floors and tin roofs. Malnutrition is also a serious threat for young children. With so many concerns, eye care was often neglected.

“People went blind and that was part of life,” Wallyn said.

But while life is tough in Guatemala, Wallyn and Merck were inspired by the culture and reverence for elderly people. Grandparents are an important part of a family and often live together with multiple generations. And while the older generations want to contribute to the family with tasks such as collecting fire wood, cooking and cleaning, they can’t do that if they can’t see.

“Coming from North America, coming from this country that has so much, learning what people lived under and trying to help where we could, which was really trying to help people with their eyes, from that point we decided that we were gonna try to address the needs of the people in this area,” Wallyn said.

From then on, Wallyn and Merck became regulars in Guatemala. Their trips started in 1992 and usually last 7-10 days. On average, the doctors said, they see about 120 patients per day, many often with cases of neglected cataracts requiring surgery.

Now, almost 30 years later, the doctors continue their trips, sometimes as many as two to three times per year. In 2000, the doctors established a nonprofit organization to help their mission called The Foundation For Saving Sight.

While the need for eye care remains, the conditions have somewhat improved. The doctors now have a full operating room with equipment that allows them to complete cataract and glaucoma surgery. They’ve also earned the trust of the locals.

Their work has also attracted other eye care groups from St. Louis, Texas and Seattle that help with the mission.

“Here we are trying to address mature cataracts with modern-day surgery,” Wallyn said. “The end result is, a person goes from blindness to being able to see, which is dramatic, life changing.”

Just as dramatic as restoring a person’s vision, however, is giving patients the knowledge and understanding of an issue with which they’ve had to live.

“I’ve found it can be equally moving to be able to help a patient who is plagued with the uncertainty and lack of understanding they have of their disabling eye condition,” Merck said. “to be able to answer for them the haunting questions that they and their loved ones have lived with for too long, not knowing whether they are neglecting or have neglected a treatable problem or not, and then witness their gracious acceptance of their difficult circumstances when they learn it is permanent and untreatable.”

Wallyn departed last week for his latest trip to Guatemala and is scheduled to return Feb. 16. Merck’s next trip is scheduled for the fall.

While the two plan to continue their mission, they’ve inspired others to join them. Merck’s son, Joseph, started attending the trips with his father as a child. He is also a certified ophthalmologist now and helps perform surgeries and other procedures. Merck’s three daughters, all nurses, also accompany the group to Guatemala and assist with the work.

Katie Wallyn also started her own project called LEAST, which stands for Loving the Elderly and Satisfying His Thirst and helps feed elderly people in San Lucas.

There are also plans to develop a mentorship program with the University of Minnesota to bring residents in training along to Guatemala. so they may experience life on a mission trip.

If others are looking to donate either through money or service, they can visit through foundation.regeycenter.com for more information about the organization.

“It’s wonderful to have people able to participate and be part of that process,” Wallyn said, “because we couldn’t do it just by ourselves.”

It’s been 28 years since their first trip, and although the Rev. Greg Schaffer is gone — he died in 2012 — his work and love for Guatemala live on in Wallyn and Merck, and continues to spread down to new generations of missionaries.

“Part of my life, and Dr. Merck’s the same way, is for us to never just consider that working in a medical practice in central Minnesota would be a sufficient answer to the gifts that we were given,” Wallyn said, “that there would be more to it than that.”

“Here we are trying to address mature cataracts with modern-day surgery. The end result is, a person goes from blindness to being able to see, which is dramatic, life changing.”